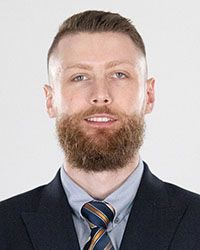 Popovic comes to Virginia after spending two seasons working at Marshall. He began his Thundering Herd tenure as the video coordinator, scouting games, providing video analysis, producing videos for recruiting and social media, and overseeing film exchange, before becoming an assistant coach for the 2021-22 season.
Prior to Marshall, Popovic was the video coordinator for Texas Tech Women’s Basketball for the 2019-20 season. While he was there, the team finished with an 18-11 record, its best over the previous seven years. In 2018-19, he worked for the Serbian national team as a training camp coach in preparation for a bronze-medal run in EuroBasket 2019 in Serbia and Latvia. He returned in the summer of 2021 as an assistant coach/scout and helped lead the team to the gold at Spain’s EuroBasket 2021 and a fourth-place finish at the 2020 Summer Olympics in Tokyo. Popovic served as the Director of Operations and Video Coordinator for Robert Morris Women’s Basketball during the 2017-18 season. The team finished 25-8 as regular season NEC champions, NEC Tournament Runners-Up and also appeared in the WNIT. He graduated with a Master of Business Administration from Winthrop University in 2017 and has a Bachelor of Science in Information Technology from LeMoyne-Owen College in 2014. He is a native of Belgrade, Serbia.