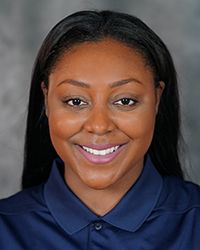 Monica Wright Rogers was named to Tina Thompson’s coaching staff in May of 2019.

In her first season as an assistant coach at Virginia, Rogers helped develop Virginia’s wing players including, Dominique Toussaint, Amandine Toi and Jocelyn Willoughby. Willoughby was the most decorated wing graduating from Virginia in a decade.  Willoughby’s accolades include averaging 19.2 points per game (ranked 24th in the nation), being ranked 10th in the ACC in rebounding (7.7 per game), second in the ACC (2oth in the nation) in free throw percentage (87.0 percent) before being selected 10th overall in the 2020 WNBA Draft by the Phoenix Mercury, and then traded that night to the New York Liberty. She is the 11th player in program history to be drafted (first since 2010) and the sixth to be taken in the first round. She was the first of eight ACC players selected in the draft. Rogers also helped recruit top transfer from Texas Tech, Tihana Stojsavljevic.

Rogers joined the Cavaliers’ coaching staff after spending the 2018-19 season as an assistant coach at Liberty and working at Incarnate Word in 2017-18 as the women’s basketball team’s director of student-athlete development.

During her time at Liberty she was responsible for the development of the Lady Flame’s wing players, including Emily Lytle who had her highest-performing season. Lytle’s accolades that season included: ASUN All-Tournament Team member after averaging a team-high 15.0 points per game and hitting 9 three-pointers during the tournament, Liberty’s first-ever ASUN Player of the Week on Jan. 28, Two-time ASUN Newcomer of the Week (Nov. 12 and Jan. 28), Christmas City Classic All-Tournament Team member and The Lady Flames’ leading scorer (12.4 ppg), her 64 three-pointers tied the Liberty single-season record which had stood since the 1989-90 campaign.

After playing at UVA, Wright was the second overall pick in the 2010 WNBA draft. Playing for the Minnesota Lynx, she was named to the 2010 WNBA All-Rookie Team averaging 11.1 points per game in her first season in the league. She won WNBA titles with the Lynx in 2011 and 2013. During Minnesota’s 3-0 sweep of the Atlanta Dream in the 2013 WNBA Finals, Wright averaged 11.7 points and 1.7 steals per game. Wright, who also spent time with the Seattle Storm during her five WNBA seasons, served as secretary/treasurer for the WNBA Players Association during the 2015 season.

Wright graduated from Forest Park High School in Woodbridge, Va., in 2006, after leading Forest Park to titles as a sophomore (2004) and senior (2006). Wright, who tallied 1,913 points in high school, was named to the USA Today All-USA first-team squad as a senior. She was also tabbed the Gatorade State Player of the Year for Virginia in both 2005 and 2006.  She was a McDonald’s All American where she holds the game record of eight steals and was a WBCA All-American where she won game co-MVP honors along with Tina Charles.

Wright graduated from Virginia with a bachelor’s degree in sociology in 2010. She is married to Michael Rogers.