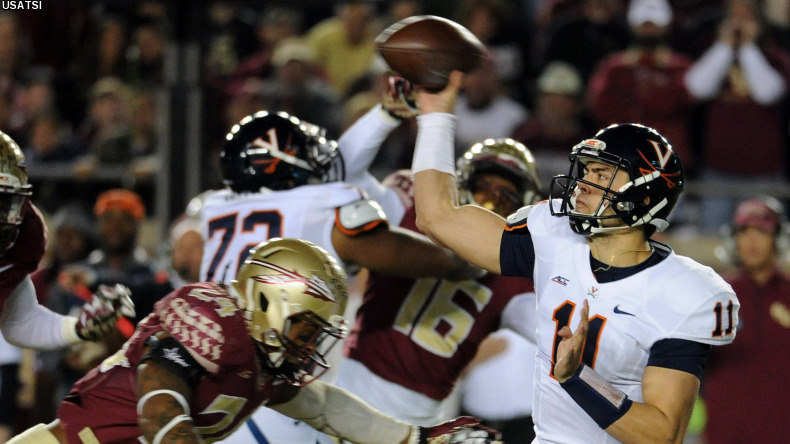 The Cavaliers lost their fourth straight game, falling 34-20 to second-ranked Florida State on Saturday to hurt their chances of becoming eligible for a bowl game. They need to win their last two games against Miami and Virginia Tech become eligible.

“It’s tough,” Cavaliers coach Mike London said. “With two games left, we have to play out. We have a bye week and we have to be a healthy football team and then you take it one game at a time.”

The Cavaliers used two early interceptions by Florida State quarterback Jameis Winston to jump out to a 13-7 lead.

Seminoles freshman receiver Travis Rudolph stopped in the middle of his route with Florida State leading 7-0 and Maurice Canady was able to break off and pick off Winston’s pass.

Virginia capitalized on the ensuing possession and Andrew Levrone hauled in a 16-yard touchdown pass from quarterback Greyson Lambert in front of cornerback P.J. Williams to tie it at 7.

Winston threw his second interception four plays later when he tried to force it to tight end Nick O’Leary. The ball was tipped in the air and gathered by Eli Harold.

The Cavaliers (4-6, 2-4 ACC) took their lone lead of the game on the next possession when Darius Jennings caught a 15-yard pass from Lambert, again on Williams. A missed extra point left Florida State trailing 13-7 at the end of the first quarter.

“I’m proud of the effort,” London said. “We have a lot to improve upon. We just can’t give it away – we can’t give away all those turnovers. It’s a tough pill to swallow. You play in a place like this, we start well, but you can’t turn the ball over.”

Things then fell off when Lambert threw an interception and was credited for a fumble on a failed backward pass. The Seminoles scored touchdowns on the first play of each ensuing possession and took a 28-13 lead into halftime.

Lambert finished with 220 passing yards with three touchdowns, one interception and one fumble.

“We have to keep him positive,” receiver Canaan Severin said about Lambert. “When we do that, he’s one of the best quarterbacks in the ACC. When we keep him poised, when we get the team behind him, keep rallying him, he can bounce back from anything, and he did.”

Parks led the team with 43 rushing yards while Severin had a team-high 56 receiving yards and the touchdown.

The Seminoles (9-0, 6-0 ACC, No. 2 CFP) have won a school-record 25 straight games and are three away from a second consecutive undefeated regular season. They are the 25th team in NCAA history to reach 25 consecutive wins.

Winston threw for 261 yards and accounted for two touchdowns. Florida State receiver Rashad Greene had a career-high 13 receptions for 136 yards and a touchdown. He is third in ACC history with 3,454 career receiving yards.

“I didn’t think we played up to our capabilities at times,” Florida State coach Jimbo Fisher said. “When you’re playing young guys, you take the good with the bad.”

Winston and the offense started slowly for the third consecutive game and the first quarter conjured some frightening memories for Florida State fans that watched the `Noles fall behind in their last two games against Louisville and Notre Dame. Getting the offense started early in games has been such an issue Fisher has tweaked the beginning of practices to help alleviate the problem.

“The defense kept us in the game,” Winston said. “If I don’t throw picks, they don’t score.”