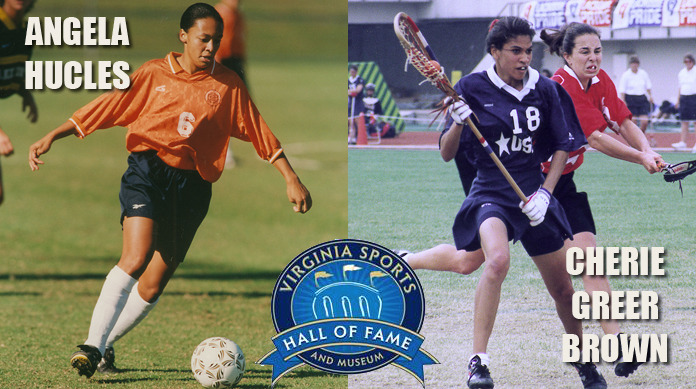 Portsmouth, Va. – Former UVa All-Americans Angela Hucles and Cherie Greer Brown will be inducted into the Virginia Sports Hall of Fame as part of its Class of 2015. Also inducted is former UVa basketball player Fletcher Arritt, who is recognized for his outstanding high school coaching career in the state. The announcement was made at the Virginia State Capitol in Richmond, as chosen by the statewide Honors Court committee.

· Cherie Greer Brown, an All-American lacrosse player at the University of Virginia and National Lacrosse Hall of Fame inductee;
· Angela Hucles, a Virginia Beach native and former University of Virginia soccer player who won two Olympic gold medals playing for the United States women’s soccer team;
· Fletcher Arritt, former basketball coach at Fork Union Military Academy who after 46 years at the helm, compiled 890 wins and won over 75 percent of his games;
· Johnny Grubb, a Richmond native and 16-year Major League veteran who helped lead the Detroit Tigers to a World Series Championship in 1984;
· Paul Hatcher, a basketball coach at Robert E. Lee High School in Staunton for 43 years, Hatcher compiled 897 victories and a winning percentage of 84 percent;· Mike Stevens, a former Sports Director of Southwest Virginia’s CBS affiliate WDBJ-7, where he served as a reporter, lead anchorman and did live play-by-play broadcasts for 23 years;
· Ben Wallace, a Virginia Union graduate and 16-year NBA veteran who won the NBA Defensive Player of the Year four times and led the Detroit Pistons to an NBA Championship.

President of the Virginia Sports Hall of Fame, Eddie Webb notes, “This class represents longevity. If you look at the careers of any of the new inductees, the athletes played at least ten years, the coaches coached for over 40 years, and our media inductee has been in sports for over three decades. We have almost 200 years of sports excellence amongst our new inductees.”

The 44th Annual Induction Banquet will take place on Saturday, April 25, 2015 at the Renaissance Portsmouth Hotel & Waterfront Conference Center in Portsmouth, VA as the headline event of Hall of Fame weekend. Tickets are now on sale. For more information, call (757) 393-8031 orvisit www.vshfm.com.

Greer Brown is a former Virginia women’s lacrosse All-American. A three-time first-team All-American for the Cavaliers, Greer was the NCAA Division I Defensive Player of the Year in 1994 and had her jersey retired at Virginia. During her career, the Cavaliers won two NCAA Championships – the 1991 and 1993 titles. Greer was also a 14-year club player and received the Beth Allen Award at the US Lacrosse Women’s Division National Tournament in 2000, which is given to “a highly skilled, creative, and disciplined player who consistently makes a positive contribution to the team effort. Such a player shall show awareness and understanding of the spirit of this unique game and exemplify character traits of loyalty and sportsmanship.”

She was a member of the 1993, 1997, 2001 and 2005 US Women’s World Cup teams, winning three world championships. She was named the Most Outstanding Player of the Championship Game in the 1997 and 2001 World Cups. In 2000, Greer was named a member of the Lacrosse Magazine All-Century Team. She was also inducted into the US Lacrosse Philadelphia/Eastern Pennsylvania Chapter Lacrosse Hall of Fame in 2005 and the National Lacrosse Hall of Fame in 2009.

Hucles, a native of Virginia Beach, Virginia, attended Norfolk Academy where she was a Parade and National Soccer Coaches Association of America (NSCAA) All-American selection in 1995. She graduated in 1996 as Norfolk Academy’s all-time leading scorer with 204 goals and 106 assists. Hucles attended the University of Virginia, where she became an All-American and was named to the All-Atlantic Coast Conference team for four straight seasons. She scored 59 goals and is the all-time leading goal scorer in the history of Virginia Women’s Soccer.

After graduating, Hucles embarked on an extraordinary professional and international career highlighted by two Olympic Gold Medals, two World Cup appearances and 109 caps for the US Women’s National Soccer Team. Hucles was the U.S. Women’s National Team leading scorer in the 2008 Olympic Games. Playing for the Boston Breakers of the Women’s United Soccer Association, Hucles made a total of 57 appearances for the club and scored six goals. In 2009, Hucles announced her retirement from both club and international soccer.

Arritt was a member of the Virginia basketball teams during the 1962-63 and 1963-64 seasons. He earned one letter as a Cavalier. Arritt attended Fork Union Military Academy in Fork Union, Virginia where he earned the role of the basketball team’s co-captain. His basketball skills earned him a scholarship to Virginia. After receiving both his B.S. degree in Biology and a M.Ed. degree in Human Biology, he returned to Fork Union Military Academy in the spring of 1966 as a biology teacher. In 1970, he took over as the head postgraduate basketball coach at Fork Union, after four years under Coach Bill Miller‘s tutelage.

Arritt became one of the most successful basketball coaches in the country, with 400 players going on to play in college, 200 of them at the Division 1 level, and dozens going on to professional careers in basketball. Fork Union won over 75 percent of its games during Arritt’s tenure. After 46 years at the helm, Arritt compiled a career record of 890 wins and 283 losses.

No. 7 Virginia Returns Home To Host No. 2 Duke
Women's Soccer

No. 7 Virginia Returns Home To Host No. 2 Duke