CHARLOTTESVILLE, Va. (AP) Virginia coach Tony Bennett and his team call it a ”gap,” a string of three consecutive possessions for the opponent in which the No. 2 Cavaliers yield no points. It might be time for Bennett’s team to increase the standard.

Malcolm Brogdon scored 13 points to lead a very balanced offense and Virginia ran its home winning streak to 21 games with a 57-28 victory against Georgia Tech on Thursday night. It marked the third time this season the Cavaliers have held a team under 30 points in a game, and it featured many of those three-possession gaps the team has come to celebrate.

”We build on each stop we get and that turns into our offense, really gets our offense going, but I also think our fans get into it,” Brogdon said of the roar that builds as a foe looks for a shot. ”They love us getting stops as much as scoring.”

Nine other players scored for the Cavaliers (18-0, 6-0 Atlantic Coast Conference), who pretty much broke the game open with a 10-0 first-half run. The burst turned a 13-10 lead into a 13-point margin that never again dipped into single digits.

”Those are our best games because guys are just getting into the rhythm and making that extra pass and seeing each other,” Justin Anderson said. ”It was good for everyone to be involved.”

Virginia led 28-16 at halftime and, at the midpoint of the second half, Georgia Tech (9-9, 0-6) had added just four more points and trailed 41-20 as Cavaliers reserves started anticipating a chance to play. It came in the final minutes.

Georgia Tech coach Brian Gregory said Virginia’s defense was good in the first half, and ”in the second half, it was another level. … What they do is every open shot you get, you have to make and we struggled to make open shots tonight.”

Georgia Tech became the third team held under 30 points and the ninth team in 18 games held to 20 or fewer points in the first half against the Cavaliers this season. Virginia also lowered its nation-leading scoring defense average of 50.6 points.

The game was the first of two straight for Virginia against teams seeking their first ACC victory of the season. The Cavaliers are traveling to Blacksburg on Sunday to face Virginia Tech (8-10, 0-5), then will wait six days before welcoming No. 5 Duke for a much-anticipated game at John Paul Jones Arena.

This one had very little anticipation, and was Virginia’s 14th double-digit victory this season.

After an inside basket by Charles Mitchell and Marcus Georges-Hunt’s drive pulled the Yellow Jackets within 13-10, Isaiah Wilkins made a 3-pointer for the Cavaliers and Justin Anderson followed a miss at the other end with a two-handed dunk. Brogdon’s layup and Anderson’s 3-pointer completed the burst, and when Georges-Hunt scored with 3:23 left, it was Georgia Tech’s first points in 7 minutes, 16 seconds. 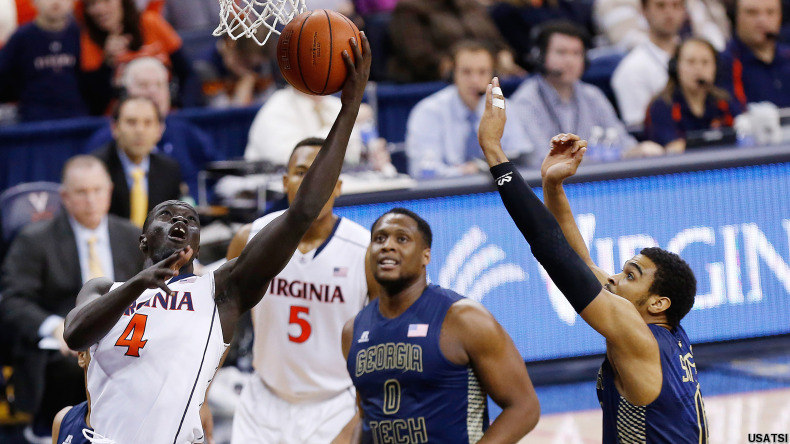 Georgia Tech: Robert Sampson, son of former Virginia star Ralph Sampson, scored two points for the Yellow Jackets with his father in attendance, but missed on a two-handed dunk try in the first half, nearly missing the rim entirely. … The Yellow Jackets finished 12 for 49 from the field, 24.5 percent, and missed all 12 of their tries from 3-point range.

Virginia: Jeff Jones, son of former Virginia point guard and coach of the same name, scored on a putback in the final two minutes as coach Tony Bennett emptied his bench. It was the second basket of the season for Jones. … Virginia had as many points at halftime and the Yellow Jackets had in the game.

Behind Brogdon’s 13 points, Virginia got seven each from Anderson and Anthony Gill, six from Marial Shayok and five each from Darion Atkins, London Perrantes, Evans Nolte and Isaiah Wilkins.

Virginia Falls Short at No. 11 Miami