Mike Tobey scored nine of his 11 after halftime for the Cavaliers (22-1, 10-1 Atlantic Coast Conference), who had to fight to the final horn to improve to 9-0 in true road games this season.

”To kind of struggle along and have to grind it out … validates that, hey, look you can do this,” coach Tony Bennett said. ”We’ve just got to do it a little better.”

The Cavaliers missed Anderson, their No. 2 scorer at 13.4 points and the league’s top 3-point shooter at 48 percent. He broke a finger on his shooting hand last weekend against Louisville, an injury that required surgery and left him sitting on the bench with his left hand heavily bandaged as junior Evan Nolte started in his spot.

Finally, after Trevor Lacey missed a drive in the final seconds for the tie, Tobey came down with the rebound in traffic and hit two free throws with 7 seconds left to make it a two-possession game again. Brogdon hit two more with 1.4 seconds left to seal the win.

Lacey scored 14 points to lead the Wolfpack (14-11, 5-7), but outside shooter Ralston Turner managed just four and missed all six 3-point tries while playing with a balky knee – a critical lack of production on a night when neither team led by more than six.

”We’ve put ourselves behind in a great way, and now we’ve got to figure out how to finish in a flurry,” coach Mark Gottfried said. ”We know where we are.” 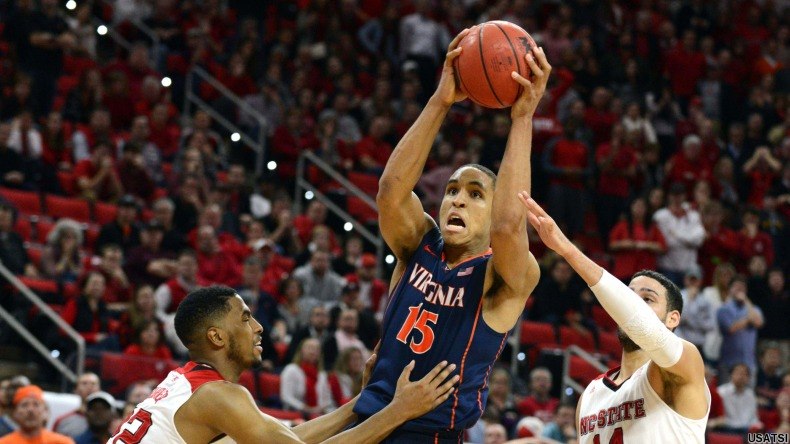 Virginia: Nolte’s only basket was a 3-pointer, though Bennett praised his defense on Turner. … Virginia finished with a 43-31 rebounding advantage. … Virginia shot 37 percent and went 11 for 18 at the foul line, but made its last six.

Gottfried said he disagreed with a flagrant foul call on freshman Caleb Martin, who was whistled for running into Nolte and knocking him to the court after a Wolfpack basket.

Brogdon hit a free throw, then Tobey followed with his three-point play.

”We go from being down one to down five,” Gottfried said. ”In a game of this magnitude at that point in the game, that is just huge.”

The three people killed in a shooting in Chapel Hill were among five people honored with a pregame moment of silence.

Deah Shaddy Barakat, 23, his wife Yusor Mohammad, 21, and her sister Razan Mohammad Abu-Salha, 19, died in Tuesday’s shooting. Barakat and Mohammad were newlyweds who met while running the Muslim Student Association at N.C. State, while Abu-Salha was a N.C. State student who was visiting them at the condominium complex.

”It was pretty hard,” Abu said. ”I just wanted to go out here and just play basketball. I didn’t want to grieve too much during the game.”

N.C. State travels to No. 9 Louisville on Saturday.