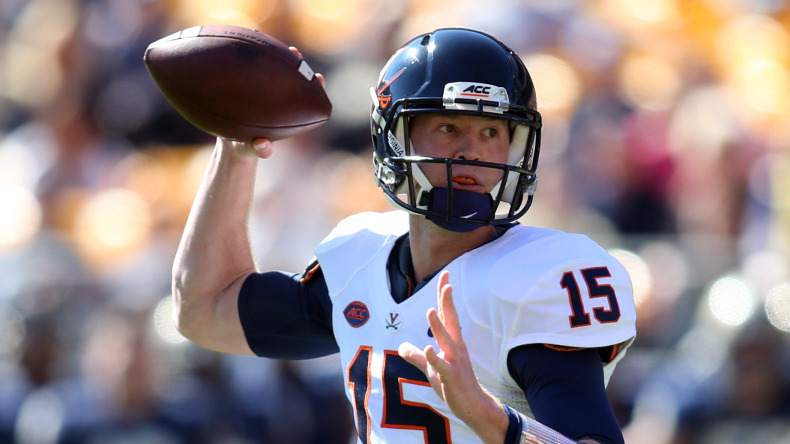 PITTSBURGH (AP) – Nate Peterman threw for 222 yards and two scores, Qadree Ollison added one on the ground and Pittsburgh held off Virginia 26-19 on Saturday.

Virginia had the ball with a chance to tie it in the final seconds but Matt Johns’ fourth-down pass to T.J. Thorpe sailed wide.

Johns completed 17 of 33 for 209 yards and a touchdown with an interception.

The Panthers came out sharp, racing to a quick 17-3 lead. Peterman hit tight end Scott Orndoff for a 37-yard touchdown pass on game’s fifth play, Chris James ripped off a 48-yard sprint to set up a 4-yard scoring run by Ollison later in the first quarter and the Panthers appeared to be in firm control.

Virginia struggled to gain any traction. Several times the Cavaliers had receivers running open deep in the secondary in the first half only to narrowly miss a momentum-turning play. The defense produced a touchdown when Mike Moore hit Peterman. The ball popped up in the air and defensive end Kwontie Moore snagged it, taking the first turnover produced by Virginia all season and chugging 15 yards to the end zone to bring the Cavaliers within 17-10.

Pitt extended its lead back to 13 when Matt Galambos returned an interception 51 yards to set up Tyler Boyd’s pretty 8-yard touchdown reception. When Johns was tackled in the end zone for a safety, the Panthers were up 26-13.

The Cavaliers made it 26-19 when Johns found Canaan Severin for a 32-yard score with 5:50 to play. Given one last shot, Virginia converted a fourth-and-25 and moved to the Pitt 42 with a minute to go. Four straight incompletions, however, ended any hopes of Virginia getting the win.