CHARLOTTESVILLE, Va. (AP) Pound it inside to the big men. Wait for the defense to sag. Then beat them over the top.

Virginia had both formulas working Saturday night as they shot 57 percent and used a 21-4 first-half run to cruise to their 11th consecutive victory, leaving Fighting Irish coach Mike Brey in a complimentary mood.

”Today was kind of men among boys,” he said after the Cavaliers’ 77-66 victory that wasn’t nearly that close. ”Any time we tried to make a little bit of a run and get some hope, they kind of squelched it.”

Anthony Gill scored seven of his 14 first-half points during the big early run, and Malcolm Brogdon opened the second half with a pair of 3-pointers from the same spot. Virginia had one first-half 3-pointer.

”I was surprised they didn’t close out,” Brogdon said of his first 3 at the 19:17 mark, when the defense suddenly seemed to be daring the Cavaliers’ leading scorer to shoot. ”I had a wide open look. I kind of hesitated a little bit and then just let it go because they were sagging and they backed off a little bit.”

Less than a minute later, Brogdon bagged another one from the same spot.

Brogdon led Virginia (12-1, 1-0 Atlantic Coast Conference) with 24 points, Gill had 21 and Mike Tobey had his second straight big game off the bench with 15 points and six rebounds. The 7-foot senior, coming off a career-high 16 points in a victory against Oakland, made 5 of 9 shots and added two blocks and an assist.

”That’s what we’re going to need from him throughout the season,” Gill said. ”He’s a great player, has a soft touch around the basket and takes up a lot of space on defense. When his mind is right, he can be a really effective player for the team and help us get to the next level.” 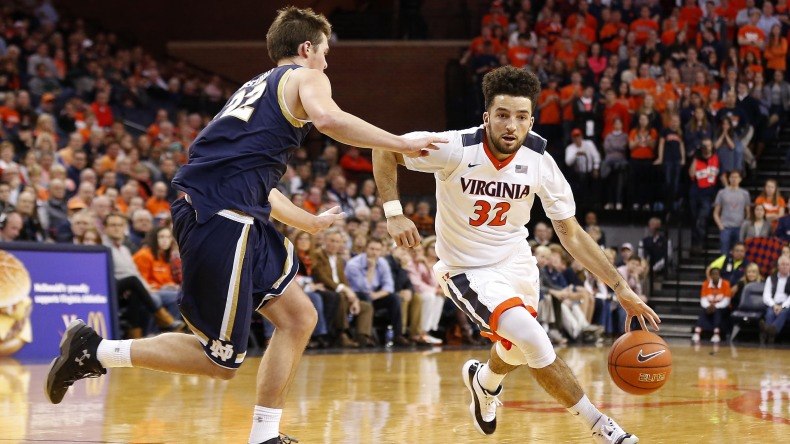 Demetrius Jackson led the Fighting Irish (9-4, 0-1) with 18 points. Steve Vasturia and Bonzie Colson each added 14, and Brey said he was thrilled to be finished with the Cavaliers, at least in the regular season.

”They’re so secure with who they are and they never waver,” he said. ”I use the phrase – their game is tight on both ends. They’re the tightest in the league and maybe in the country on both ends of the floor.”

The Cavaliers’ 12th straight victory at home came as Virginia launched its bid to become the first team since Duke from 1997-2000 to win three consecutive outright ACC championships.

Virginia made it look easy once the Irish stopped making contested shots.

Notre Dame made its first four shots, all by different players, and then missed 10 of 12 as Virginia turned an 8-4 deficit into a 25-12 lead. The Cavaliers built their lead as high as 13 points three times in the first half.

It was 36-24 at halftime, and the closest the Irish came thereafter was 36-26 on Colson’s basket to open the second half. Brogdon scored Virginia’s first eight points, including the two early 3-pointers, then fed London Perrantes for another 3 in the right corner for a 47-30 lead, the Cavaliers’ biggest to that point.

Later, two free throws and a three-point play by Tobey, who was coming off a career-best 16 points against Oakland, and a free throw by Gill capped 10-2 burst that pushed the margin to a game-high 59-40.

Notre Dame: Coach Mike Brey fell to 0-7 in his career against Virginia. … The Cavaliers were the first ranked opponent the Irish have played this season.

Virginia: Coach Tony Bennett improved to 5-0 against Notre Dame is his career, including an NCAA tournament victory in 2008 while at Washington State. … Brogdon (16.2 ppg) started the day having missed all 13 of his 2-point shots in his last two games, and 17 of 18 in his last three. He ended the drought with a driving left hand layup at the 13:22 mark of the first half.

Notre Dame: is at Boston College on Thursday night.

Virginia: is at Virginia Tech on Monday night.