CHARLOTTESVILLE –– In 1982, Greg Byers cleared the bar at 7 feet, 2.25 inches, setting a University of Virginia record for the outdoor high jump.

Six years later, Herman Moore tied that mark. Moore was best known for his feats as a wide receiver, but with head football coach George Welsh’s blessing, he also competed in outdoor track & field at UVA.

“It definitely helped me with my speed and my running form, and all those things dramatically improved over the course of two years,” said Moore, who had an outstanding NFL career after graduating from UVA. “I had a lot of confidence as a big receiver in my running ability.”

When he cleared 7-2.25 in 1988, Moore never would have dreamed that three decades would pass before the record he and Byers shared was broken.

The breakthrough came this month at Lannigan Field, where Virginia hosted the ACC’s outdoor track & field championships. Brenton Foster, a junior who’s in his first year at UVA, waged a lengthy duel with Pittsburgh’s Greg Lauray before clearing 7-3.75 to win the ACC title.

“It’s always good to see that people are challenging whatever the limit is or the bar is,” Moore said. “I’m just proud of all the athletes that come through there and make a contribution, not only on the sports side of it, but they all seem to be really good students.” 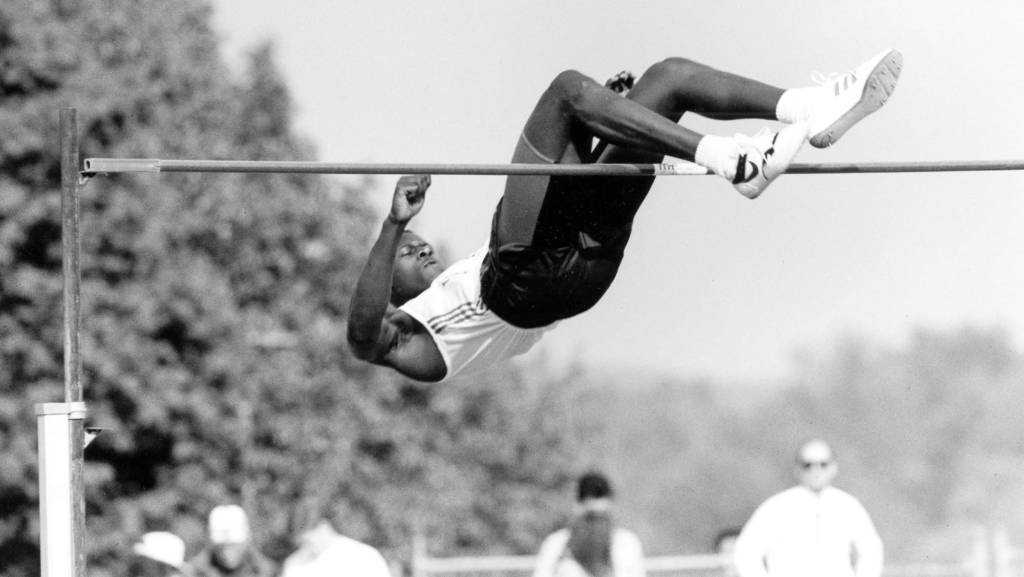 Moore set the school record for the indoor high jump (7-3) in 1990, and Foster tied it this year. He’s never met Moore, who lives in Michigan, but “I’ve heard about him,” Foster said. “Crazy athlete.”

At the ACC meet, an individual champion earns 10 points for his team, and with the Cavaliers contending for the team title – they ended up finishing second – Foster had extra motivation in his battle with Lauray.

“We knew we needed the points, we needed the 10,” Foster said. “That going back and forth, it was such an adrenaline hit. It was so much fun to be out there.”

The 6-3 Foster is from Townsville, Australia, a coastal city of about 175,000 residents in the state of Queensland. He transferred to UVA in 2018 after two years at Manhattan College. He excelled athletically at Manhattan, placing 10th at the NCAA indoor championships as a sophomore, but the school was a poor fit for him in other ways.

Manhattan’s track & field facilities were less than ideal, Foster said, “and it was so cold [in New York City] most of the time. We’d always be inside. I didn’t like the cold at all. I hadn’t seen snow until I got to America, when I was 18.”

Moreover, he said, “I grew up in a smaller town, and living in the city was a bit much for me.”

Foster laughed. “I don’t think I’d seen a tree for months, so that was a big thing. And I’d had a really good indoor season [in 2017-18], so I knew that I could come to a bigger program, one that could really push me, and I’d be around people with like-minded goals, like the Olympics.

“I’d heard of Virginia’s academics, and it’s a wonderful place that I had an opportunity to come to, and I knew that I’d continue to do well here.”

Jordan Young, Oghenakpobo Efekoro, Andrenette Knight and Marija Bogavac are among the track & field standouts who have thrived at UVA after beginning their college careers at other schools, and Bryan Fetzer tries to keep scholarship money available for transfers each year. 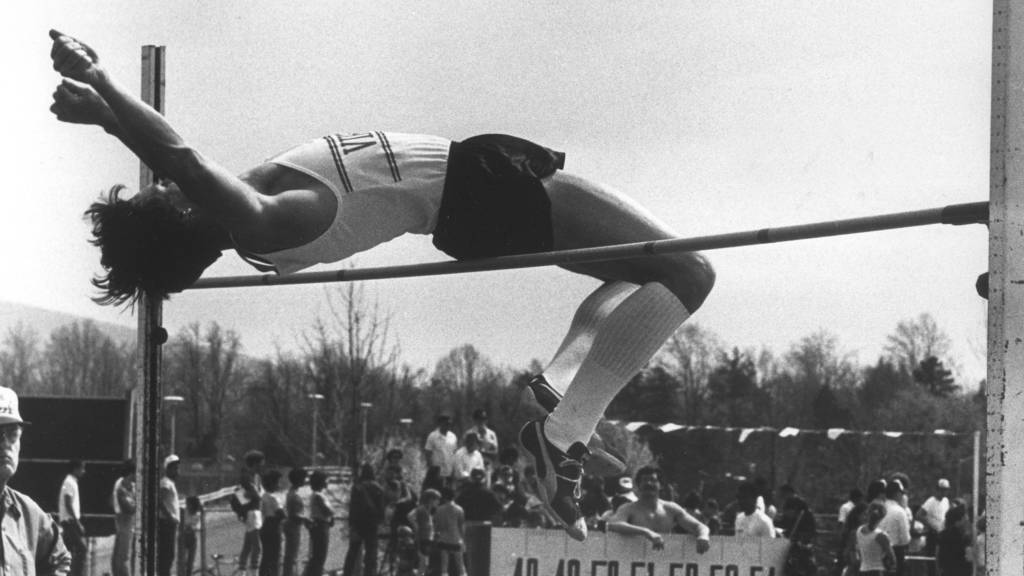 The men’s high jump has not been one of Virginia’s strengths in recent years, but that’s changing, and not only because of Foster. Trey Causey, a freshman from Winchester, already ranks fourth all-time at UVA in the outdoor high jump (6-11.75).

“Trey is super talented, and he’s going to be really, really good down the line,” said Fetzer, who coaches the Cavaliers’ high jumpers. “Brenton’s actually been a great technical role model for him. He’s helped Trey out a lot, but they’re very competitive, and any time you can develop the competitive juices at practice, that’s hard to match.”

At Manhattan, Foster said, “I was pretty much the only jumper. Here, Trey’s pushing me every meet, and if I see Trey clear [the bar], I say, ‘Now I’ve got to clear it. Now I’ve got to jump high.’ It’s definitely good to have him.”

Causey and Foster are among the Cavaliers competing at the NCAA East Preliminary meet, which began Thursday in Jacksonville, Fla. They’re scheduled to jump Saturday afternoon. The top 12 finishers in each individual event and the top 12 relay teams will advance to next month’s NCAA championships, which will be held in Austin, Texas.

Foster’s winning jump at the ACC meet tied for eighth best in the NCAA this season. He placed 11th at the NCAA indoor meet in March.

“In all my years of coaching,” Fetzer said, “Brenton is one of the best competition jumpers I’ve worked with. He can kind of turn things up a notch when the pressure gets put on him, and he understands the event, which is a great thing.”

Foster played a variety of sports as a boy, including soccer, cricket and Australian rules football. He started competing in track & field when he was six years old, and when he was 11 he won the high jump, triple jump and long jump in his age group at the national championships.

“I thought, ‘I can actually do this pretty well,’ ” Foster recalled. “So that’s when I started to seriously focus on it.”

After graduating from William Ross High School, Foster gave up the sport for about six months. Then he heard from his friend Hayden Clarke, a long jumper and triple jumper with whom Foster had trained in Australia.

Clarke was in the United States, attending and competing for Manhattan College. “He said, ‘There’s a scholarship here if you want it,’ ” Foster recalled, “so I picked up track again. I’m glad I did, because obviously I’m doing pretty well now and I love it again.”

Charlottesville, Foster said, is “amazing. It reminds me of home so much. I think just the school in general, being in more of a college town, is really nice.”

At Manhattan, Foster cleared 7-4.25 indoors to set a school record there. Fetzer, who has coached such elite high jumpers as Adam Shunk and Craig Norman, said he’s confident “Brenton has the ability to jump [2.30 meters/7.54 feet], which is kind of the gold standard in the high jump.”

In June, Foster will compete unattached at England’s U23 championships. In July, he’ll jump at the World University Games in Italy.

An economics major, he plans to compete for Virginia during the 2019-20 indoor season and then redshirt next spring. He wants to focus on trying to make Australia’s Olympic team for 2020. Foster then hopes to return to UVA and compete as a graduate student in 2020-21.

Asked how high he believes he can eventually jump, Foster didn’t hesitate. “Before I’m done with this sport, 2.33 [meters] is the mark,” he said. “I have it written on my high jump shoes: 2.33.”

That converts to 7.64 feet, and the 175-pound Foster knows where he must improve if he’s to clear the bat at their height.

“A lot of the guys in high jump in college right now are just powerful athletes,” he said. “Like Herman Moore, he couldn’t practice it too often because of football, and he probably didn’t have the best technique, but he was just freakishly powerful and freakish high jumping, and I feel like in college right now that’s [true for] most of the high jumpers. They’re just so powerful they can get up there, but their technique isn’t that good.

“I think it’s kind of the opposite for me because I’ve been doing it for so long. I can technically do it really well, so I can get up there, but my power can be improved so much by lifting more.”