Marcelli Making Most of Offseason

CHARLOTTESVILLE –– The college wrestling season runs from November to March. For those with serious aspirations in the sport, the pace really picks up after that.

“We work harder in the offseason than we do in the regular season,” University of Virginia head wrestling coach Steve Garland said.

“The offseason, it’s just non-stop. The best guys in the country are getting better. The biggest strides are happening now. During the season it’s really hard, because you’re focused on making weight, you’re focused on competition. Now is the time to grow and get one percent better every day and really lock in.”

Victor Marcelli wants to be an elite wrestler, and he’s willing to put in the work needed to reach his goals. That’s been the case since Marcelli enrolled at UVA last summer, teammate Jack Mueller said.

“He throws his mind, body and soul into each workout he does, and that’s a really hard thing to do, especially in wrestling, because it’s so grueling on the body,” said Mueller, a rising senior who was NCAA runner-up at 125 pounds last season.

Marcelli “loves wrestling,” Garland said, “and all he does is want to get better. He wakes up and says, ‘How can I get better today, Coach?’ “

Mueller laughed when he recalled his first impression of Marcelli, a graduate of Jackson High School in Massillon, Ohio, about 60 miles south of Cleveland.

“When he first got here, he was kind of pudgy, so I didn’t think much of him,” Mueller said, “but he worked his tail off. I remember we were doing an outdoor workout once early in the preseason, and he impressed me, almost jaw-droppingly so, just going hard with every rep. It was a manual labor workout, and I just remember being like, ‘All right, this kid’s here to go.’ It was cool to see.”

In his first year at Virginia, Marcelli redshirted. Wrestling unattached, he posted a 21-6 record at 184 pounds.

“You’re always going to walk away feeling like you could have done more or could have done better, but at the end of the day I’m grateful,” Marcelli said. “My coaches, they put a ton of work in with me. It’s rare for redshirts to be able to get the kind of attention that I got.”

He’s had an outstanding offseason. Competing at 86 kilograms (189.6 pounds), Marcelli shined in April at the U.S. Open in Las Vegas and in May at the United World Wrestling’s Junior Freestyle World Team Trials in Raleigh, N.C. In Charlottesville, he follows the example set by the Cavaliers’ top two returning wrestlers: Mueller and Jay Aiello, the ACC runner-up at 197 pounds as a redshirt sophomore last season.

The NCAA championships were held in Pittsburgh in March, and Marcelli went as Aiello’s training partner. It was an experience Marcelli won’t soon forget.

“Being there was insane,” he said. “It just kind of made me almost flip a switch, honestly, with my diet, and just the way I was training, living. I felt like I was far away from where I wanted to be next year, and it kind of lit a fire under me and refocused me, and I feel like I’ve been building since then.” 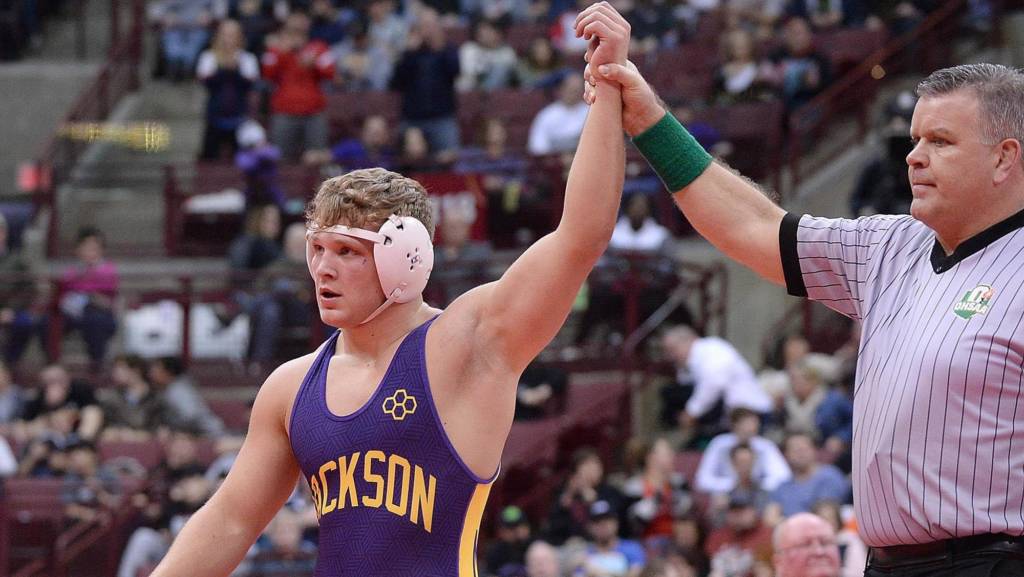 Marcelli was a late addition to Virginia’s recruiting class for 2018-19. In November 2017, he signed with Cleveland State. In March 2018, however, Ben Stehura resigned as the Vikings’ head coach, and Marcelli was released from his letter of intent.

“He fell into our laps,” Garland said. “We got so blessed.”

Marcelli visited Arizona State and UVA. Then he canceled the other trips he had scheduled, “because I loved it here, and I knew this was the place,” Marcelli said.

“I was immediately sold on the coaching staff, loved them, and the team just seemed different from a lot of teams I’d ever met. There was a close bond, with kids that really cared about the way they did things. They weren’t just fixated on winning. They loved being good people, good friends to each other, and you could immediately tell that.”

His relationship with Mueller transcends wrestling. Each has lost an older brother under tragic circumstances. McKenzie Mueller, who was 23, drowned in July 2013. Lucas Marcelli, who was 20, was killed in a plane crash in August 2014.

“I think about him every day, and it’s a big motivator in my life, definitely,” Victor Marcelli said of his brother. “It’s just kind of like a reminder to keep things in perspective and be grateful for everything, because it can all go away at any time.”

Muller said he doesn’t like it when people tell him they know what he’s going through, “just because everyone’s situation is unique.” But he told Marcelli, “I’ve experienced a similar thing, and I just want you to know that I’m here for you, because I know how hard it can be.”

They work out together regularly and spend time with each other outside the wrestling room at Memorial Gym.

“That one incident in our life has really made our relationship grow to a whole different level, just because we both know that we’re there for each other,” Mueller said. “It’s not like a mentor-mentee sort of relationship. I consider him one of my closest friends, and it’s cool. I don’t have to be that role model in his life, because he can be just as much of a role model in mine.”

At Jackson High, home of the Polar Bears, Marcelli wrestled at 152 pounds as a freshman. He competed at 170 pounds as a sophomore and, after recovering from a serious knee injury, at 182 as a junior.

As a 12th-grader, Marcelli finished 57-1 after becoming the first wrestler from Jackson since 2002 to win a state title.

At UVA, he joined a program whose two seniors in 2018-19 included Will Schany, a talented 184-pounder. That gave Virginia the luxury of redshirting Marcelli.

“It was the right call,” Garland said.

Injuries marred Schany’s final college season, but he ended up qualifying for the NCAA championships, and Marcelli “got to keep developing and be a fly on the wall at the end of the year and see how the NCAA tournament goes down,” Garland said. “It motivated him, and he was just a sponge for everything. We’re just really excited that it worked out that way, because he has four years to contribute.”

Marcelli, who plans to major in economics, is eager to help the Wahoos rebound from a disappointing season. At the ACC tournament, UVA had only one champion (Mueller) and finished in last place.

“Everybody’s training hard, everybody’s focused, and I think we’re hungry, because ACCs was a rough day,” Marcelli said. “It almost seemed like everything went wrong that could have gone wrong. It was just one thing after another.”

Mueller seriously considered redshirting in 2019-20, but his loss in the NCAA final put him on an another path.

“Why would I wait 730 days, rather than just 365 [to compete again]?” Mueller said. “It already burns enough. I don’t need a year to keep that pain manifesting in my heart. We can have a really good lineup this year, and I want to be a part of something special.”

He’s not the only one.

“Our guys have been unbelievably dedicated this summer,” Garland said. “It’s been a phenomenal offseason.”