CHARLOTTESVILLE –– When she arrived home last weekend, the 2020 Olympic Games were still on, and University of Virginia junior Paige Madden was preparing to continue training for the U.S. Olympic Trials, even if that meant swimming in the chilly waters of Mobile Bay. Then came the announcement that the Tokyo Games had been postponed to 2021.

For Madden, the news brought a measure of relief, she said, “because there’s a lot of anxiety built up around the uncertainty of not really knowing when the Games were going to take place.”

A kinesiology major in UVA’s Curry School of Education and Human Development, Madden is home in Mobile, Ala., with her parents. She’d planned to cap her competitive career at the NCAA championships in 2021, but now she expects it to continue at least through the Olympic Trials next year.

The postponement “definitely gives me an advantage to get back to work for another year and get stronger, get faster and focus on the little things,” said Madden, who hopes to become a physician assistant. “For me personally, I was dealing with injuries through January and February, so that kind of set me back a little bit. Hopefully I won’t have to deal with that next year.”

She’s been kayaking in Mobile Bay but hasn’t had to swim there. She’s been able to train outdoors at a nearby swim club.

“It’s unheated, but we try to do it late in the afternoon, so it has time to warm up throughout the day,” Madden said. “It’s cold, but it’s not freezing.”

With online classes under way at UVA, her teammates are scattered around the country. “There’s been a lot of phone calls back and forth, a lot of FaceTimes, because I think first of all we’re bored, and we all miss each other, too,” Madden said. “We’re just trying to figure out our own situations and trying to check in on each other and see what we’re up to and how we’re doing, since it’s a hard time for everyone.” 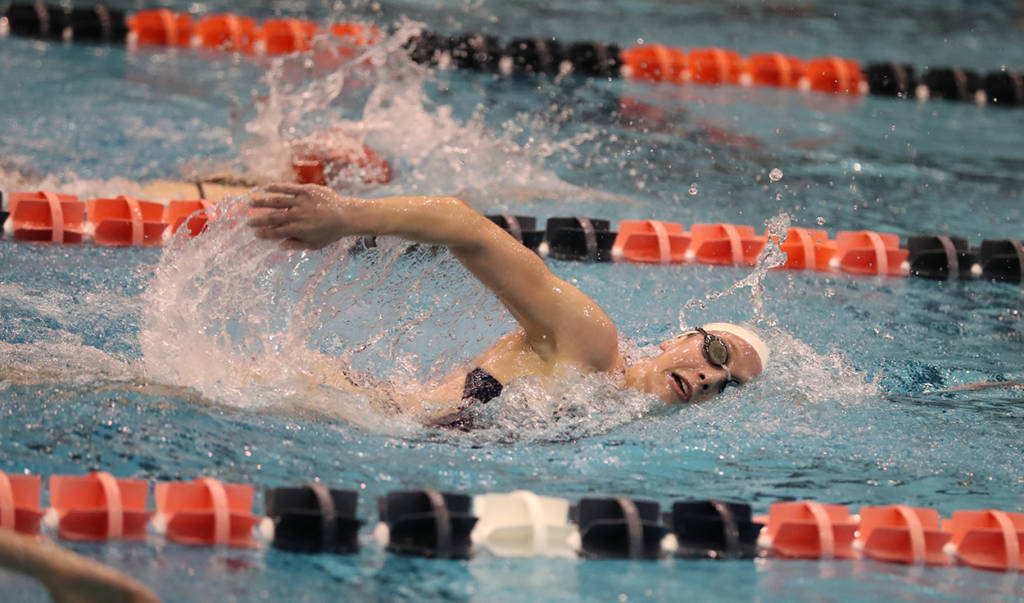 Late last month, the UVA women finished first and the men second at their respective ACC swimming & diving championships. Both teams had started training for their NCAA meets when, because of the COVID-19 pandemic, college sports were shut down this month.

“It was definitely a huge bummer,” Madden said. “We completed 95 percent of the season, but the last part of the season is always where all your hard work shows up, and I think swimming is unique in that aspect, because you really only rest for a meet once or twice in a season. A lot of people hadn’t rested at all and so didn’t really get to see the fruits of their labor, I guess.”

Those swimmers included Madden. Despite not tapering for the meet, she won five titles at the ACC championships, three in individual events (200-yard freestyle, 500 free, 1650 free). She also helped the Wahoos win the 800 free and 400 free relays. All of which earned Madden the distinction of becoming the first Cavalier since Lauren Perdue in 2013 to be named MVP of the ACC women’s meet.

“Unfortunately for her, she didn’t get to peak,” said Todd DeSorbo, head coach of UVA’s swimming & diving teams. “I know she won three [individual] ACC titles, but she was not tapered. And so not only did her season get cut short, but she didn’t have the opportunity to really show everything she had this year. Fortunately, she has another year.”

Madden, who was born in Jackson, Miss., moved with her family to Mobile when she was 3 years old. Alabama is not considered a hotbed for swimming, but Madden excelled in the sport, starring for her school, UMS-Wright, and her club, the City of Mobile Swim Association.

A seven-time high school All-American, she competed at the U.S. Olympics Trials in 2016.

Madden, whose brother swam for Alabama, chose UVA over Georgia in October 2016. As a freshman, she competed in three events at the NCAA meet, placing 17th in the 200 backstroke, 26th in the 200 freestyle, and 51st in the 500 freestyle.

After finishing ninth at the NCAA championships that season, the Hoos raised their national profile in 2018-19, as did Madden. At last year’s NCAA meet, UVA finished sixth, and Madden placed second in the 500 free and fifth in the 200 free.

DeSorbo expected even more from her, and the team, at this year’s meet, which was scheduled to begin March 18 in Athens, Ga.

“Our women were seeded to win,” DeSorbo said. “The seeds don’t really tell the whole story, and they don’t necessarily matter at all. But the story it does tell is that our women were in the best position they’ve ever been going into NCAAs, and a finish better than UVA’s ever had was probably going to happen.

“I think our women could most definitely have challenged for a national championship this year. Obviously, a lot of things have to play out, and they have to make it happen. But I think we were really in a good position to challenge for the title, and most definitely be top three.”

The UVA men placed 10th at the NCAA championships last year, and DeSorbo believes a similar finish was a realistic goal for them this season.

“I think we had lot left in the tank on the men’s side going into NCAAs,” DeSorbo said. “The thing about our men is, we’re really young. Of our 18 guys at the ACC championships, nine of them were freshmen. It’s just a really young team, and fortunately for us those nine freshmen swam really, really well.”

DeSorbo met with the men’s and women’s teams at the Aquatic and Fitness Center after the NCAA championships were canceled.

As disappointed as the Cavaliers’ seniors were, DeSorbo said, “I think they’d begun to prepare themselves for the end of their careers already. For them, it was their last ACC championship, and everything this whole season was the last. It was the last first day of practice. It was their last winter training camp. And so two weeks away from NCAAs, I think a lot of them had begun to prepare themselves for the fact that the end of their career was coming. Granted, it came earlier than they thought it was going to come, but I think maybe that preparedness they had been going through prior to that helped them cope with it.”

The UVA women will lose such standouts as swimmers Morgan Hill and Megan Moroney and diver Sydney Dusel, but they figure to enter the 2020-21 season on the short list of NCAA championship contenders.

“We have some really good incoming first-years, so that’s exciting, ” Madden said, “and I think we’ll definitely be even more hungry for the title, just because [the opportunity to compete for it] was taken away from us this year … I think everyone will be motivated to put in the work.”


EDITOR’S NOTE: During this time of non-competition, UVA athletics will be posting frequently on VirginiaSports.com to keep you up to date with the happenings, experiences and thoughts of our student-athletes, coaches, staff and alumni. We encourage Wahoo fans to share these links on your social media accounts for others to enjoy. We also suggest you follow the University’s website––news.virginia.edu––for more stories and information. #GoHoos

Step Up to the Plate Returns With New Format
Baseball

Step Up to the Plate Returns With New Format