Alum Getting First-Hand Look at Crisis

CHARLOTTESVILLE –– When he arrives home from work, Matt Dziama goes to the garage, strips off his clothes and puts them in a bag. Then he heads to the basement.  His father, wearing gloves and a mask, collects the clothes, throws them in the washing machine, runs a load on the hot cycle, and discards the bag.

For many who work in health care, this is a familiar snapshot of life during the COVID-19 pandemic.

“It’s been crazy,” said Dziama, a standout defensive midfielder on the University of Virginia men’s lacrosse team that won the NCAA title in 2019. “It’s definitely been an interesting experience, and I think I speak for everyone when I say I’m looking forward to things getting back to normal.”

Dziama, who graduated from UVA last spring, is an urgent care medical assistant in his hometown of Wellesley, Massachusetts, a suburb of Boston. He’s working part time at Harvard Vanguard Medical Associates while taking online classes to fulfill the requirements he needs to apply to a physician assistant program.

He interviewed for the job in February, after which he was offered the position and assigned to urgent care. After two weeks of training early last month, Dziama said, “I was basically thrown into the fire almost immediately and began working and treating patients with COVID or suspected COVID. So it has definitely been hectic, but it’s rewarding, for sure.”

About 25 percent of the patients at his clinic have tested positive for COVID-19, Dziama said.

His primary role, Dziama said, is “to bring patients in, take their vital signs, and then get an order from either a doctor, a P.A. or a nurse practitioner on whether they think I should perform a throat swab or a nasopharyngeal swab. And then if they do want the swab, I’ll run that test down to the lab to get the results.” 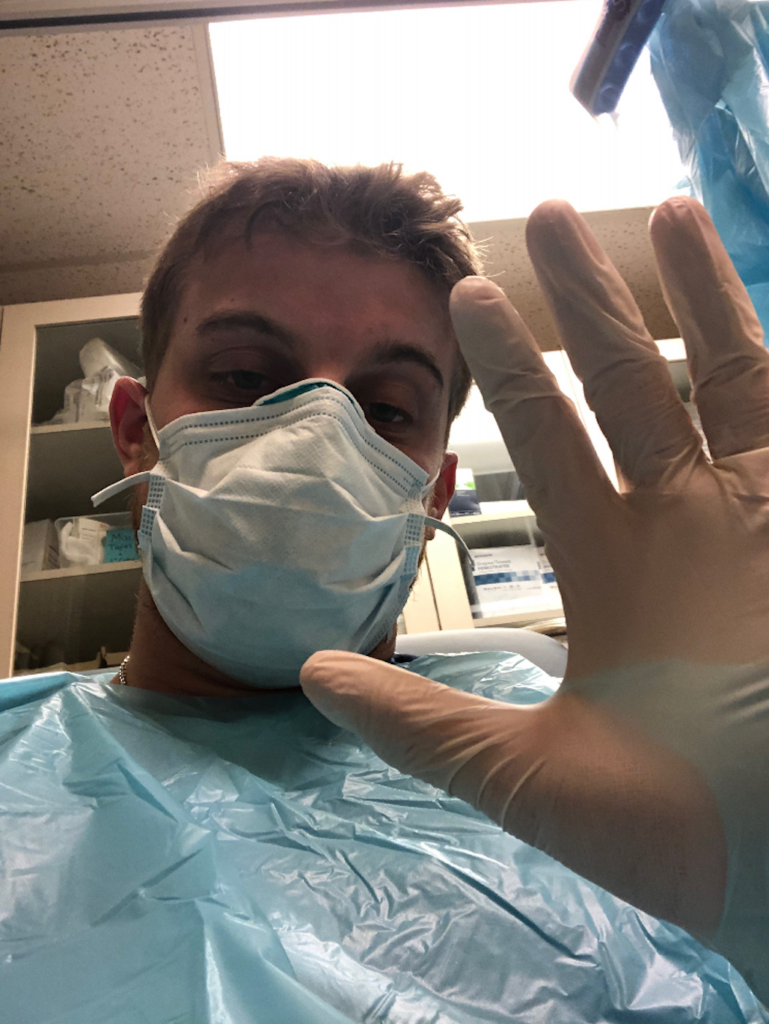 Dziama shares a home with his parents, Jeff and Kim Dziama. The family’s living arrangements reflect the nature of his work.

“I’m quarantined in my basement right now,” Dziama said. “I’ve been sleeping on the couch here in the basement for the past three, four weeks. Luckily, I have a pretty comfortable couch, and I’ve got my books and textbooks from class that are keeping me busy. I’ve got a shower and bathroom down here, so I’m not going too crazy yet.”

He majored in history at UVA, but around the midpoint of his fourth year, Dziama began considering a career in health care. (His mother is a psychologist, and his sister is a nurse practitioner.) He’d taken a couple of science courses at the University but needed more in order to be able to apply to P.A. school. He’s enrolled in a post-baccalaureate program at Regis College in Massachusetts and also plans to take online classes at Northeastern University.

“I love Boston––that’s where I grew up––but I kind of want a change of pace,” Dziama said.

He hopes to finish his post-bac program this summer and then start applying to P.A. schools. He’s planning to begin his P.A. program in 2021-22 and so will continue working for the next year.

“I have my EMT certification,” Dziama said, “so if I wanted to I could work for a private ambulance company or something like that, but I think right now I’m going to stick with the medical assistant job. I’m getting some really good hands-on patient care experience, and I’m learning a ton.”

He’s working three days a week, and the experience has deepened his desire to pursue a career in health care.

“In a strange way, I think that since I was thrown into this scary, sort of intense situation, if I’m able to handle this, I feel like I’ll be able to handle whatever else is thrown at me down the road in health care,” Dziama said. “It was definitely intimidating and scary my first couple of weeks, but now that I’ve been getting the experience with sort of a high-intensity, high-risk situation with this pandemic, I feel more confident.”

At work, Dziama wears scrubs and at least one mask at all times.

“I have an N95 mask and a surgical mask,” he said. “If you’re going to be within six feet of a patient, you always have to have your N95 mask on, and if I’m going to go into the room with a patient or take their vitals or take them down to X-ray or lab or the pharmacy, I have to put on my N95 mask, I’m gloved at all times. I have a face shield as well, and then a gown. So I’m basically covered from head to toe.”

That wasn’t as hands-on as his current job, Dziama said, “but you’re still learning a ton.” When a doctor would meet with a patient, Dziama would take notes on “everything the doctor was saying, and everything that the patient was saying, in order to help with their diagnosis and treatment plan for that patient. And if the doctor wanted an MRI or an X-ray or labs or prescribed medication, I would do all of that for him on the computer.”

Essentially, Dziama said, a medical scribe makes it easier for the doctor to be fully engaged with patients and make them feel comfortable.

That Dziama has chosen health care for a career delights Lars Tiffany, UVA’s head man’s lacrosse coach. Many players in the sport go into finance after college, and it’s “wonderful to have somebody not follow the typical lacrosse player path and do something that’s going to take more time,” Tiffany said.

“It’d be a lot easier to go some different routes, and this route obviously puts him in harm’s way. But he’s always expressed himself clearly. You always knew where his emotion was and how much he cared about others, and that’s why I see him going into the health care field.”

“I just smile when I think of Matt Dziama,” Tiffany said. “He had one of the most unique dichotomies of personality from on the field to off the field I’ve ever coached.”

Off the field, Dziama was an endearing, caring soul, Tiffany said. But when he stepped across the white lines, Dziama was “out there to annihilate the offensive ball-carrier, to a point that it can be harmful for a team, because he’s earning penalties,” Tiffany said.

“I’d call him a loving warrior. He really, really cared about his teammates, and seeing the way he interacted with the team off the field, you’d think someone else must be wearing the number 14 jersey [on the field] today.”

In 2019, when the Hoos won the program’s sixth NCAA title, Dziama was the team’s “best defensive cover man,” Tiffany said. “Playing defense with a short stick is really, really difficult, and we gave Matt some tough responsibilities and put him on an island for many games last year, highlighted by that Duke game [in the NCAA semifinals].

“He was a competitor who wanted that challenge. Some of the unsung heroes of a defense are those short-stick D-middies who are just doing their job, kind of like an offensive lineman going against an All-American D-end and not getting any help from the tight end or the running back. That was Matt Dziama out there. He didn’t get a lot of attention, but he was a very, very critical part of our team defense.”

After graduating from UVA, Dziama played professionally for Major League Lacrosse’s Boston Cannons, but he’s decided “to hang up the cleats and start the next chapter of my life.”

He still loves lacrosse, though, and remains close with many of the members of this year’s UVA team, especially Dox Aitken, Michael Kraus and John Fox. The Cavaliers were only six games into the season when college sports shut down last month because of concerns about COVID-19.

“For their season to be ended abruptly like that was really hard,” Dziama said, “and they’ve expressed to me that it was really hard and obviously unexpected. I definitely feel for those guys.”