CHARLOTTESVILLE –– Ten-month-old Luke O’Leary took his first steps last week, and his mother was there to witness the milestone. For that she’ll be forever grateful.

In a typical spring, Sara O’Leary might well have been elsewhere, but the University of Virginia’s head women’s tennis coach, like so many Americans, is working from home these days. For O’Leary, if there’s a positive to the changes brought about by the COVID-19 pandemic, it’s being able to spend more time at home with her husband, Tom, and their first child.

“Luke is just growing and changing so quickly,” O’Leary said, “and so it’s been really special to be here with him and see those changes and be able to get him up in the morning every day and put him to bed every night and read to him. He’s trying all these different foods right now. It’s definitely a blessing through all of this.” 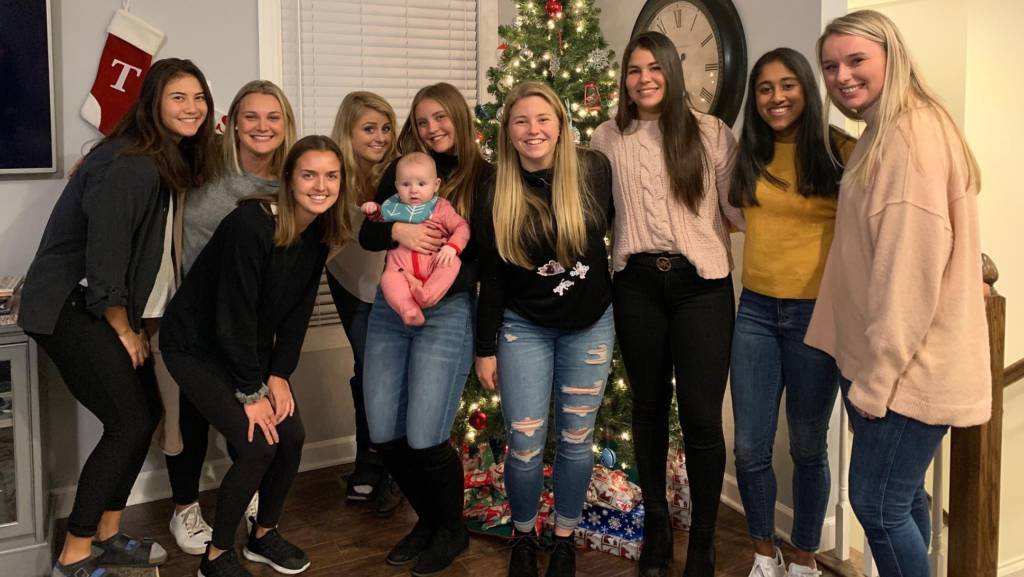 “It’s challenge for sure finding a quiet place to do work,” she said, “but also knowing that he’s here and he’s awake and I want to spend time with him. So it’s been challenging, trying to get into a really good routine, but I’ve still been able to get things done, and then my husband’s obviously super helpful with that and understands there’s things I need to do and gives me the space and time to do it.”

Most days, O’Leary said, she works in the morning, has lunch with Luke, and then works some more in the afternoon. She and Tom try to go out for a walk with Luke each day, but there’s no set routine.

“It’s ever-changing, for sure,” she said.

O’Leary, who’s in her third year at UVA, was able to spend much of last summer with Luke. “I’d be on the court one or two hours a day with some of our girls who were in town,” she said. “But other than that, I was pretty much home with Luke, which was nice.”

Her husband has been a constant in their son’s life.

“Tom’s actually staying home with Luke,” said O’Leary, whose maiden name is Anundsen. “He’s amazing. He’s so good with Luke, and it’s great for me to know that Luke’s in good hands every day. Tom will bring him to all our home matches, and sometimes he’ll stop by practices, so the team has definitely gotten to know Luke well.”

There were eight players on the UVA roster this season, giving Luke eight “big sisters.”

“All the attention goes to Luke when he shows up at a practice,” O’Leary said, laughing. “We had a Christmas party, and the whole team was just playing with him and talking to him and holding him. I’m very thankful for how much they care about him and love being around him. It’s been really special to see that. I can’t wait to see him back out there when he’s walking and on the courts and has a better understanding of what’s going on.”

The Cavaliers’ three seniors this season included Chloe Gullickson. Luke’s presence in the program “created kind of like a family dynamic,” said Gullickson, who’s the youngest of six children. “It was fun having a baby around.”

O’Leary has always been “very nurturing and nice,” Gullickson said, and motherhood has only magnified those qualities in her. Handling the myriad responsibilities of a head coach while raising a baby has undoubtedly been stressful at times for O’Leary, Gullickson said, but “it showed how important we were to her, to balance having a kid and basically being our mom away from home. It was so much fun when Tom could come and she could be a mom while also being a coach.” 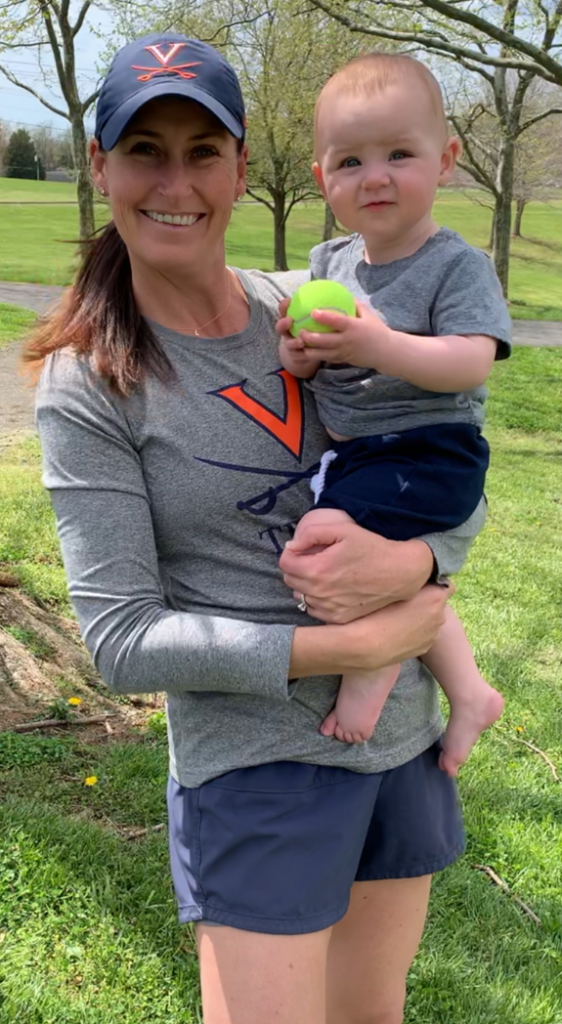 Sara O’Leary and Luke
In October, Tom and Luke joined the team at a tournament in Blacksburg. In January they flew to California for another tournament in which the Wahoos were playing.

“It’s been really great for me,” O’Leary said, “to actually get to spend a decent amount of time with Luke his first year and still be working full time.”

Spring break started at the University on March 7. The Hoos were in Orlando, Fla., the next week, preparing for a March 14 match against Northwestern, when word came that the season had been canceled. Thankfully, O’Leary said, that was a trip Tom and Luke did not make, because “instead of flying back that Saturday, which we were originally supposed to do, we ended up taking a bus and driving 13 hours on Friday to get back. So it was a blessing in disguise that Luke was not on that trip. I think that would have been a little bit of a tough one for him.”

UVA finished the season ranked No. 11 nationally. “It was obviously really difficult to end the season when we did,” O’Leary said. “I think we had a lot of momentum.”

In what turned out to be the Cavaliers’ final match, they lost 4-3 to ACC rival Florida State, which finished the season ranked No. 2 nationally.

The match attracted a large crowd at the Snyder Tennis Center, O’Leary said. “It came down to our last match, and we actually had three match points. It was an unbelievable experience. Our team learned a lot from the loss, and I believe that experience is going to help us tremendously moving forward.”

Virginia loses three seniors––Gullickson, Hunter Bleser and Camille Favero––but is adding one of the nation’s most highly regarded recruiting classes.

“I think the culture of our team is in a really, really good place right now and super motivated,” O’Leary said, “and because of our culture, I think we’re in a good place to have them come in. They’re tremendous players, so we’re super excited about that, and I think they’re just really good-character people who are going to fit in well with our team.”

When the 2020-21 Cavaliers will be able to convene in Charlottesville is unclear. For now, O’Leary is relishing her time with her immediate family. Sunday will be her first Mother’s Day since Luke was born.

Tom is “going to cook brunch for us,” O’Leary said, “but other than that, there’s not a whole lot we can do these days. Hopefully the weather will be nice and we can go on another walk. I’m just thankful that we can all be together for Mother’s Day.”