CHARLOTTESVILLE –– Its long-awaited season opener started inauspiciously for the University of Virginia football team Saturday at Scott Stadium. The Cavaliers fumbled away the opening kickoff and trailed 10-0 after the first quarter. But they never panicked, even after a shaky third quarter, and eventually took control of this ACC game.

“Lots to learn, plenty of things to improve, but they were resilient and they played through their mistakes,” UVA head coach Bronco Mendenhall said after his team’s 38-20 victory over Duke. “I’m encouraged.”

Virginia, which led 17-10 at halftime, trailed 20-17 after three quarters before pulling away in front of a crowd that, because of the ongoing COVID-19 pandemic, was limited to players’ family members and guests. It turned out to be a satisfying first step in a season originally supposed to begin Sept. 7 for the Wahoos.

“What a journey’s it been just to play football,” said Mendenhall, who conducted his postgame press conference via Zoom. “It was a pretty surreal experience. There were many times throughout the game where I couldn’t believe we were playing and that it counted and it was for real.

“It was unlike anything I’ve experienced before. I wanted so desperately for our players to have success on the field and have a tangible result to show for it, because of how diligent they’ve been in all the [COVID-19] protocols …. It could change for us tomorrow, but to this point, they’ve really done a nice job.”

This is Mendenhall’s fifth season at UVA, and he’s 5-0 against Duke. The Blue Devils have turned the ball over 22 times in those five games. The Hoos had seven takeaways Saturday against Duke (0-3, 0-3). Five came on interceptions, which tied the program’s single-game record.

Senior safety Brenton Nelson led Virginia with two picks, and senior cornerback Nick Grant and senior safeties Joey Blount and D’Angelo Amos had one interception apiece. (Blount, who left the game in the fourth quarter with an injury, said afterward that it wasn’t serious.)

“That game was in the balance for a long, long time,” Mendenhall said, “and those turnovers really were the difference, and those are forced and those are plays made, not just miscues by an opponent’s offense.”

UVA’s offense looked out of sync at times, especially in the first and third quarters, but still gained 450 yards. In his first start as a Cavalier, redshirt sophomore Brennan Armstrong completed 24 of 45 passes for 269 yards and two touchdowns, with two interceptions. He also rushed 10 times for 47 yards and one TD.

“Performance-wise, there was a lot to learn,” said Armstrong, who backed up Bryce Perkins in 2018 and ’19. “I needed to be more consistent, but I think that’s going to come as time goes. Overall, I’m just happy to get out there with the guys. We finally get to play. I’m just happy to get a win under my belt and we’re just going to continue to grow.”

On a night when junior running back Wayne Taulapapa rushed for a career-high 95 yards, nobody on the offense created as much buzz as wide receiver Lavel Davis Jr.

A 6-foot-7 true freshman from Dorchester, South Carolina, Davis caught four passes for 101 yards and two touchdowns. His first TD, on an 18-yard pass from Armstrong, put Virginia ahead for good with 12:43 left. His second covered 26 yards—Davis caught Armstrong’s pass at the 9 and then broke tackles on his way to the end zone–and put some distance between UVA and Duke.

Davis has been one “of our best-kept secrets,” Mendenhall said. “It’s hard to hide 6-7 for about 12 weeks in practice. The same plays that he made tonight he’s been making against us almost every day. He wasn’t highly recruited and was kind of viewed as a project, but we’ve loved him from the very beginning and we see a really bright future for him as he learns and grows and develops.”

Of the offense’s uneven performance Saturday, Mendenhall said, “It takes time. So even though we’ve been practicing against each other, this was Brennan’s first start and it’s Lavel’s first college football game. The good news is the future looks bright. The other good news is it just takes time. We’re still finding our formula.”

The Cavaliers’ defense gave up several big plays in the passing game, most notably tight end Jake Marwede’s 55-yard touchdown reception in the first quarter, but sacked Duke quarterbacks five times and excelled against the run.

“We kept doing our thing on defense and getting the ball back to the offense as much as possible,” said senior inside linebacker Zane Zandier, who finished with a career-high 15 tackles, two of them for loss. 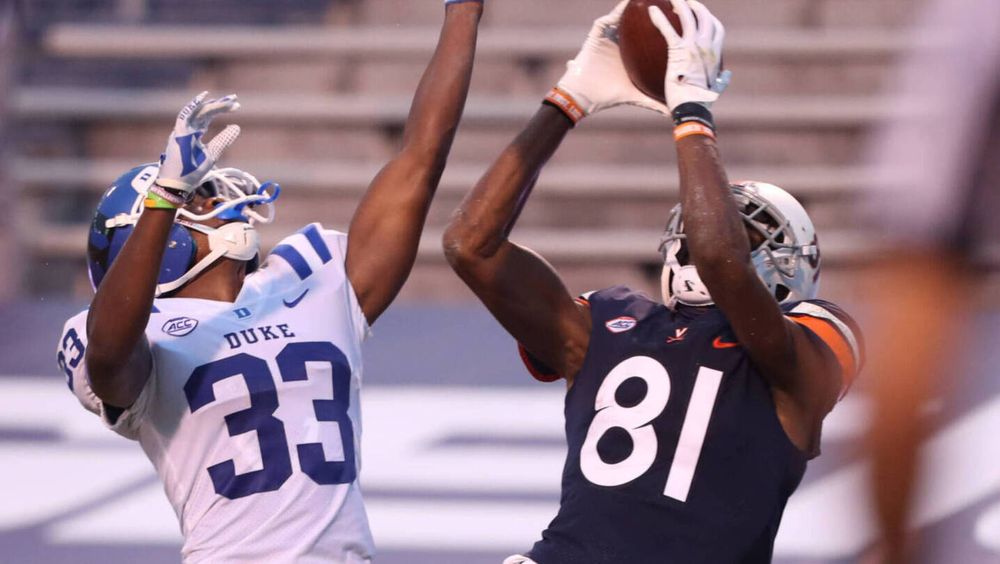 UNSUNG HERO: The honor of breaking the ceremonial rock in the locker room, a Virginia tradition after every victory, went to Kelli Pugh, the team’s head athletic trainer.

Pugh has been instrumental in helping the Cavaliers stay healthy during the pandemic, and they erupted in cheers after she shattered the rock with a sledgehammer.

She helped get us here … first Break the Rock of the regular season is our amazing sports medicine provider, Kelli Pugh‼️#GoHoos | #THEStandard pic.twitter.com/ptxd2bTsWz

NAME TO REMEMBER: With help from his teammates, Davis has steadily improved since arriving on Grounds in July.

“I think we’ve been trying our best to try and instill confidence in him,” said senior Terrell Jana, UVA’s most experienced wideout. “For a true freshman, it’s hard to come out and make plays. My first year I wasn’t doing anything nearly like he’s doing. But he’s been doing it in practice a lot, so our thing was to keep reminding him, ‘Trust your preparation. Trust the process.’

“You could tell early on he struggled a little bit, but as soon as you make one play, you kind of fall into what you know, and what he knows is making plays. So it was amazing seeing him catch those two touchdowns [against Duke] and making big plays for the offense. We’re going to need that. That 6-7 presence, you can’t coach that.”

“That was his first real action there, same with mine,” Armstrong said. “But he’s going to know how to get off different [press coverages] He’s going to start figuring out how [defenses are] going to play him and the ways we can attack. It’s only going to get better from here.”

UVA fans will have to wait until 2021 to hear from Davis. Under Mendenhall, first-year players are not available for interviews until the spring of their first year on Grounds.

TRIUMPHANT RETURN: An injury sidelined Brenton Nelson, the ACC’s defensive rookie of the year in 2017, for the Cavaliers’ final six games last season. Nelson is now a fifth-year senior, and his impact on UVA’s secondary was clear against Duke.

In addition to his two interceptions, the second of which stopped a promising Duke drive, Nelson had a 6-yard tackle for loss.

“You never really know what you have until you lose it,” Nelson said. “It’s a lot of hard work, especially during the offseason, but I’m so glad to be back.” 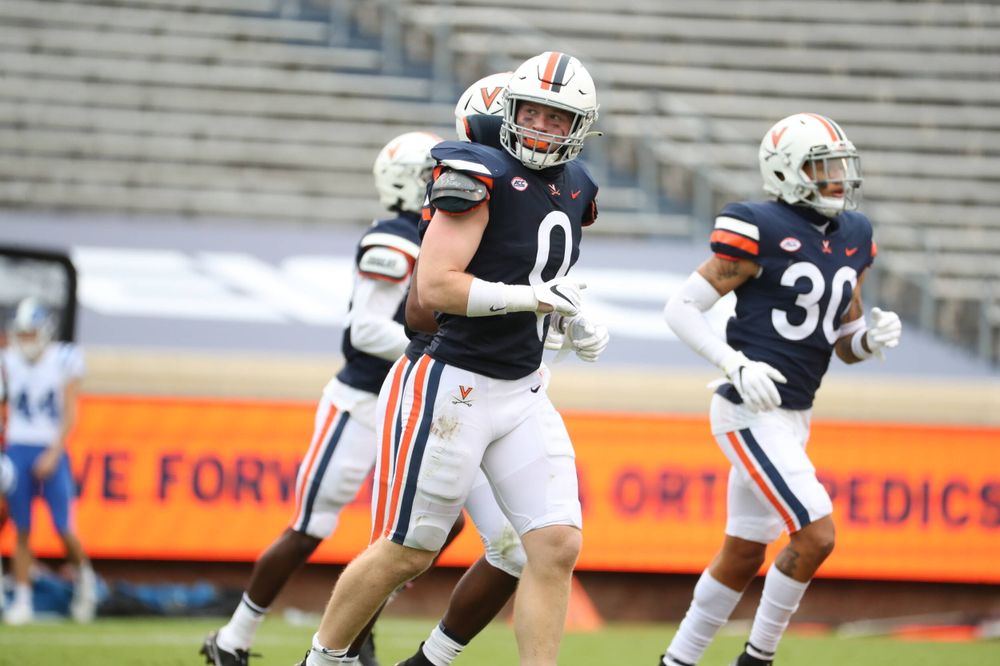 GAME BALLS: Numerous Cavaliers shined in the opener. In addition to Davis and Nelson, the list includes:

“Wayne ran really hard, he ran really physical, he ran really consistent,” Mendenhall said. “I think part of the reason he did that is because he had Shane Simpson coming in and sharing some of the load. You had both of them rolling at a high level.”

“They played a fantastic game,” Jana said. “Their leadership and their experience and their chemistry is really showing now, and the performance they put on here was great.”

Mendenhall said: “Duke is really active and very multiple up front, and very aggressive, and it’s difficult to run the ball on them. I think our offensive line did a really nice job in their preparation for the game, but they’re also seasoned and experienced. And so that was something we haven’t had in our era here at UVA to this level. It was a really nice starting point to see where they took off from.”

• Senior kicker Brian Delaney. He made his only field-goal attempt, a 32-yarder late in the first half, was 5 for 5 on extra points and had five touchbacks on kickoffs.

• Junior wideout Billy Kemp IV. He had a game-high seven receptions for 70 yards.

Jackson, a sophomore, recorded a career-high 12 tackles. Taylor, a junior, had two tackles for loss, including 1.5 sacks. Snowden, a senior who stands 6-foot-7, broke up two passes, and his classmate Gahm had six tackles, one of them a sack, and recovered a fumble that he returned to the Duke 10. Taulapapa scored Virginia’s final TD on the next play.

• Senior safety D’Angelo Amos. The graduate transfer from FCS power James Madison University made a diving interception late in the first half and finished with seven tackles.

“He was laid out vertical, and I actually thought he undercut too soon and the ball was going to go over him for a touchdown,” Mendenhall said of Amos. “That just proved I’m wrong maybe more often than not. But it was an amazing play. He’s experienced and he’s proven all through fall camp that he’s played a lot of football, and he showed that tonight. He’s a very good tackler as well.”

THEY SAID IT: The victory was the Cavaliers’ sixth straight over the Blue Devils.  Among the comments afterward:

• Mendenhall on Armstrong: “Consistency will be built rep by rep. Really good start. You saw great capability, you saw learning moments, and you saw some inconsistency and then resiliency and a positive outcome. It’s going to take a little time, but consistency at that position takes a little time. But he has a chance to be a really, really fine quarterback. What you saw was just a starting point.”

• Jana on the atmosphere at Scott Stadium: “Obviously it’s fun playing in front of all those fans [at a normal game], but when it gets down to it, it’s still football. Our big thing is our culture, so if we can translate that to no fans, to a thousand fans, to a hundred fans, whatever it is, we’ll be good.”

• Zandier on the atmosphere: “Honestly, it wasn’t too bad. It was definitely a little different. It was quieter. You could hear every call being made … I could see my family and to me that’s really all that matters, so I wasn’t too affected by it.”

• Zandier on the Cavaliers’ resilience: “Even when we were down [in] the third quarter, going into fourth quarter, it seemed like everybody was cool, calm, collected. We kind of had a feeling we were going to win. We just needed to make those plays to pull away and ended up doing it.”

• Mendenhall on junior Tavares Kelly, who lost a fumble on the opening kickoff. Simpson took Kelly’s place on that unit for the rest of the game.

“I didn’t tell him anything,” Mendenhall said. “I’ve learned over the years, other than encouragement, I just kind of let it go, because players want to play well, and they’re already hard on themselves. It would be different if I didn’t think he cared. That’s usually when I speak up. But when I know they care and they make a mistake, then I usually just encourage … No one feels worse than Tavares. He’ll come back and he’ll go work well.”

This will be UVA’s first trip to Death Valley since 2009.