Scott Stadium has long been considered one of the most beautiful football stadiums anywhere, with Monticello Mountain as a backdrop and the Blue Ridge Mountains on the horizon.The Carl Smith Center, home of David A. Harrison III Field at Scott Stadium, is a facility befitting Virginia’s stature as one of the nation’s elite Division I-A football programs. It was dedicated at UVa’s 2000 season opener against Brigham Young on September 2.

Following a landmark $25 million challenge grant from UVa alumnus Carl W. Smith in June of 1997, the University of Virginia embarked on an ambitious three-year plan to renovate existing Scott Stadium and increase its capacity to over 60,000. The project was completed at a cost of approximately $86 million, with the balance coming from additional fund-raising and income generated by the stadium.

The expanded stadium includes new seats and new upper decks arranged in a bowl shape to the south of the field. With the addition of 15,000 seats, the stadium’s capacity at the time of the expansion went from ranking in the bottom third to the top third in size among ACC schools.

The final phase of the stadium renovation project was completed during the summer of 2000. It entailed: constructing the south bowl’s upper deck, expanding the President’s Box on the east side to include a donor recognition seating area and lounges, building 44 luxury suites, finishing the upper level of new Bryant Hall, creating a 600-space, three-level parking garage behind new Bryant Hall, expanding the press box area on the west side, adding a pergola plaza above the hill on the north end, and replacing the bleachers on the northwest and northeast sides of the stadium with permanent seating.

A total of 12 additional luxury suites were constructed on the northeast and northwest sides of the stadium for the 2001 season.

Featuring many enhanced amenities and a distinctive architectural appearance all its own, the stadium is designed to create the ultimate gameday experience for the players, coaches, fans and media.

In addition to the stadium’s existing main north entrance, four other major entrances were built in 2000 to improve the flow of pedestrian traffic throughout the facility. New bathrooms and concession areas were added to reduce the amount of time fans spend waiting in lines. More than 220 television monitors were installed in various locations, including two at each concession area, so fans can follow the action on the field even when they aren’t in their seats. Stadium seating for persons with disabilities was also expanded.

Providing exclusive gameday accommodations, the luxury suites wrap around the south end of the stadium. Each one is climate-controlled and carpeted, and contains a private rest room and TV monitor as well as a refrigerator, sink, cabinets and other furnishings. A movable glass partition opens from each suite onto a separate outdoor seating area. Offering an unobstructed view of the entire field, the seating areas are covered and have a TV monitor and overhead heat lamps.

The lower level of the south bowl and new locker room areas were completed before the start of the 1999 season.

A new state-of-the-art video board, dubbed ‘Hoo Vision, was unveiled at UVa’s 1998 season opener against Maryland. It was upgraded prior to the 2009 season, and at 1,824 square feet, is more than three times larger than the old one. The board’s resolution and brightness have improved, and it uses a 16×9 widescreen format. The upgrades, paid for by CBS College Sports Properties as part of its agreement with the university, cost $2.4 million. They also include LED wings that feature out-of-town scores, individual and team statistics from the Virginia game, and messages from sponsors. Moreover, modifications were made to improve the stadium’s sound system. In the fall of 2019, ‘Hoo Vision was upgraded with a new sound system.

As part of the ‘Hoo Vision project, the north end hillside seating area was moved 30-feet closer to the playing field. Terraced levels were added to make the area more safe and accessible.

The principal architectural firm working on the expansion of Scott Stadium was Heery International, Inc., of Atlanta, one of the world’s foremost designers of sports facilities. Also working with Heery on the project was VMDO Architects, PC, of Charlottesville.

The field utilizes the new-generation Prescription Athletic Turf system which is designed to continually monitor and control the amount of available water and air below the surface. UVa became the first university athletic program to install the patented PAT system. In 2017, a new field and updated drainage system was installed at Scott Stadium.

In addition to funding the replacement of artificial turf in Scott Stadium with a new natural grass field, the gift made possible the construction of a new artificial turf practice and competition field near University Hall, and established an endowment for future departmental needs.

The original Bryant Hall complex was completed for the start of the 1985 season at a cost of nearly $3 million. It was named in honor of J.C. Herbert Bryant, a 1932 Virginia graduate and one of the principal benefactors of the structure.

Scott Stadium was the gift of Frederic William Scott and Elisabeth Strother Scott, and was dedicated to the memory of his parents, Frederic Robert Scott and Frances Branch Scott. Responding to recommendations of a Stadium Committee, which had been appointed by then-President Edgar Shannon, the University decided to renovate the stadium in 1974. In a splendid gesture of generosity, the descendants of Frederic W. Scott pledged $360,000 for a comprehensive renovation. The athletic department provided an additional $125,000 to install new aluminum seating, and an anonymous benefactor made an additional gift of $300,000 for the purchase of an artificial playing surface, which was replaced in 1981. The artificial playing surface was replaced again in 1988.

Following a two-year delay due to construction problems, the stadium opened its upper decks on the east and west sides for the first time in the fall of 1980. The additional 12,000 seats in the upper level brought the permanent seating capacity to 40,000. Completion of the lower south bowl seating area increased the stadium’s permanent seating to 44,000 for the 1999 season.

With the addition of the south bowl’s upper deck and expansion of the northeast and northwest sides of the stadium, the seating capacity for 2000 soared to 61,500. That figure includes seating for approximately 5,000 on the north end hillside.

A permanent lighting system was added to Scott Stadium in 1983, bringing the excitement of night football to Charlottesville. Before the 1986 season, Scott Stadium successfully underwent repairs to correct deterioration of the foundation in the stadium’s original seating.

The press box is named for Captain Norton Pritchett, Virginia’s director of athletics from 1935 until his death in 1951. It was originally built in 1980 as the condition of an anonymous donor’s gift. The press box was expanded to virtually twice its original size for the 2000 season. It includes: state-of-the art computer connections, a spacious glassed-in reception and dining area, a large open-air working press area, rest rooms, and numerous booths for radio, television, visiting and home coaches, and stadium personnel.

The stadium attendance record was set on Aug. 30, 2008 when 64,947 fans watched the Cavaliers play Southern California. 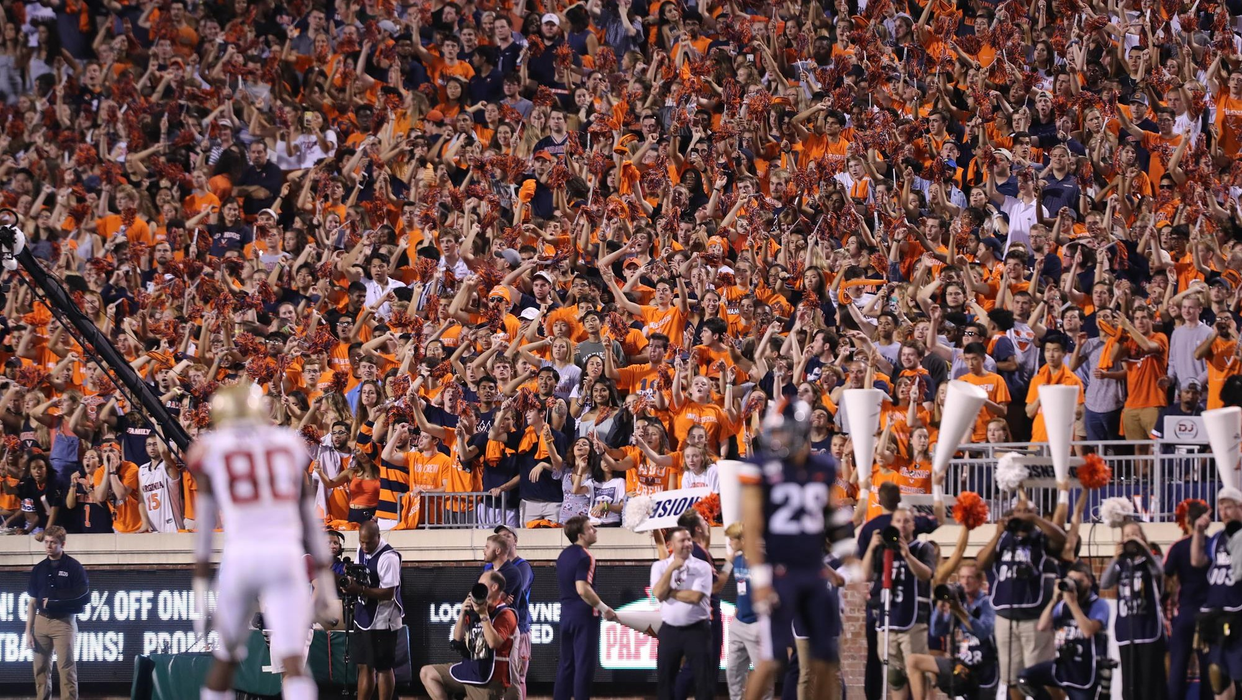 From the East/West: I-64 to exit 118B (Culpeper-Charlottesville). Take second exit (sign will say University of Virginia Information Center and Business 250 East) and bear right onto Ivy Rd. At second stoplight, turn right on to Alderman Rd. Go 8/10ths of a mile and Scott Stadium will be on left side. Parking for football games is at University Hall (see directions for University Hall).

From the North: Take Route 29 south into Charlottesville (Emmet St.). Turn right at Ivy Rd. Go the next stoplight and turn left onto Alderman Rd. Stay on Alderman Rd. for 8/10ths of a mile and Scott Stadium will be on left side. Parking for football games is at University Hall (see directions for University Hall).;/p>

From the South: Take Route 29 to Business Route 250 East (sign will say University of Virginia Information Center) and bear right onto Ivy Rd. At second stoplight, turn right on to Alderman Rd. Go 8/10ths of a mile and Scott Stadium will be on left side. Parking for football games is at University Hall (see directions for University Hall).