Asfaw Sets the Pace for Cavaliers

CHARLOTTESVILLE –– As a sixth-grader at Julius West Middle School in Rockville, Maryland, Rohann Asfaw had to run a mile in his physical education class. It took him 12 minutes to cross the finish line.

“I wasn’t in the best shape,” Asfaw recalled this week. “I was a pretty big video-game guy in middle school. I was never really athletic.”

Nothing changed for him until the calendar flipped to 2013. That’s when Asfaw, now an eighth-grader, made a New Year’s resolution on which he followed through. He started running, “just because I wanted to be more fit and I wanted to be in better shape,” he said. “I would just run 10 minutes a day, every day. And then the following month I would increase my running by five minutes.”

By the end of the eighth grade, he’d broken six minutes for the mile, Asfaw said, “and I remember my sixth-grade P.E. teacher was in shock. He couldn’t believe that I had come so far.”

Asfaw hasn’t slowed down. After a stellar career at Richard Montgomery High School, where he won five individual state titles (one in cross country, one indoors, and three outdoors), he enrolled at the University of Virginia, where he’s in his fourth year.

His current PR in the mile is 4 minutes, 8.66 seconds, and he’s still improving.

“Rohann, I think, is just scratching the surface, and he has a lot of upside developmentally,” said Vin Lananna, UVA’s director of track & field and cross country.

Asfaw, 21, has had an exceptional fall for the Cavaliers’ cross country team. The U.S. Track & Field and Cross Country Coaches Association has twice honored him as its national athlete of the week, and he was honored Wednesday as the ACC’s runner of the week.

Late last month, at the Virginia Invite, Asfaw won the men’s 8k with a time of 24:03.1 on the Wahoos’ home course, Panorama Farms in Earlysville. About two weeks later, at the Wolfpack Invite in Cary, North Carolina, he placed first again, this time with a time of 23:32.5.

Asfaw said he attributes his success to “being able to train without any interruptions. I haven’t been injured since last December, and it’s just been nice getting to put in mileage and stay healthy and have workouts go well. I think it’s just an accumulation of all the work I’ve put in.”

Lananna, who’s in his second year at UVA, agreed.

“I think being healthy and injury-free is first,” Lananna said. “Secondly, he’s been really conscientious about doing all the little things correctly. And the third thing is, he stays pretty even-keeled. Never too high, never too low.”

Also, Lananna said, Asfaw pays attention to the “many small things that may seem insignificant to someone who isn’t familiar with [distance running]. Nutrition, sleep, stretching, icing, all of those things are really important. So is the rotation of your shoes from the wear and tear, and being sure that you are really attuned to how your body is feeling on a particular day. In any endurance event, what you’re trying to do is be as aerobically sound as you can possibly be, while pushing the envelope, walking on the line but trying not to cross over into the injury-producing areas.” 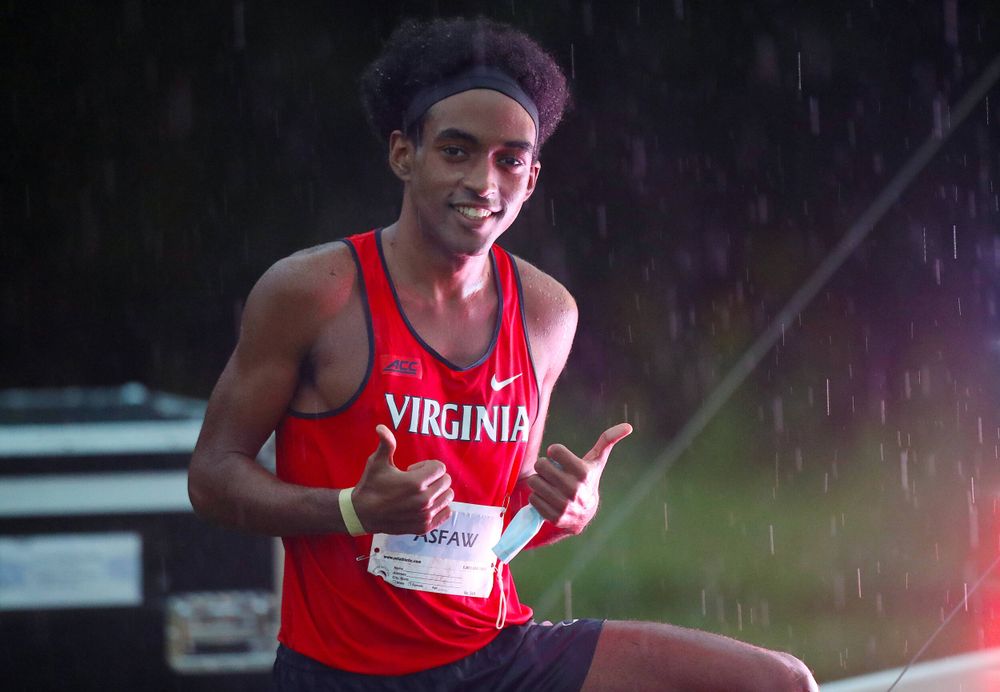 Running is not the only area in which Asfaw flashes impressive footwork. He’s also a talented dancer who’s become a sensation on social media. He has 1.4 million followers on Tik Tok, where he posts videos of his dance moves. It’s probably not surprising, then, that in his major, American studies, Asfaw has a concentration in visual and popular culture.

Rohann Asfaw (@rohann_asfaw) not only excels for @UVATFCC, winning the first two races of the fall, but he's also brought in over 1 million followers on TikTok, tuning into his dance videos: https://t.co/kLPoClsnBn#GoHoos pic.twitter.com/u07MVbWKZH

Asfaw, who was born in Olathe, Kansas, moved to Maryland when he was in elementary school. He dabbled in basketball and soccer as a boy but never took a sport seriously until he began running in middle school.

What he likes most about running, Asfaw said, is that it’s easy to chart progress. “When you improve, you can see it,” he said. “It’s the time. You just ran faster. Having such a measurable means of improvement just makes it really motivating.”

As a UVA freshman in 2017-18, he ended up redshirting in all three sports: cross country, indoor track & field, and outdoor track & field. After arriving in Charlottesville, “I was doing really well, and my coach at the time really wanted me to hang with the top guys,” Asfaw recalled. “I wasn’t really used to the mileage at the time, and I got a stress fracture in my foot. That took me out for a few months, and I spent the rest of the year just playing catch-up with fitness.”

In 2018-19, he competed in all three seasons but didn’t distinguish himself in any event. In 2019-20, however, Asfaw took significant strides forward.

In cross country, he posted a time of 24:19.7 in the 8k, then a PR for him, at the Virginia/Panorama Farms Invitational. During indoor season, he placed fourth in the 3000 meters at the ACC championships, earning all-conference honors, and finished third in the mile (4:08.66) at the Navy Invitational.

The COVID-19 pandemic forced the cancellation of the outdoor season, but Lananna had seen enough to expect big things of Asfaw once competition resumed this fall.

“He improved a ton,” Lananna said. “I really expected his outdoor season to be really good last year. He has good natural speed. He does have the appropriate running form. He has all the mechanics that would lead one to believe that he should be an outstanding runner, and what I hoped was to work with him one-on-one, to be sure that he is being mindful of all those small things. It’s not unusual for distance runners to go out and do all the running, and do the strides, and do the workouts, but all those other things are the distinguishing factors between one being a reasonably successful runner and one being an extraordinary runner.”

"When you improve, you can see it. It’s the time. You just ran faster. Having such a measurable means of improvement just makes it really motivating.” -- Rohann Asfaw on what he loves about running

Lananna said he believes Asfaw’s best event “ultimately will be the 5000 outdoors, but one of my real goals for him, and I think he probably would concur, is that needs to be able to run faster at the middle distance events, because that’s going to assist him as he moves to the longer distances. He’s a good cross country runner. His middle distance running is OK, but that is something we worked on all last winter, and I thought we would see some fruits of that labor during the spring, and then [the pandemic hit].”

After UVA switched to online classes in March, Asfaw stayed in Charlottesville “and kind of did my own thing,” he said. “Took some time off and got back to it and just slowly built my mileage up to a decent amount, and I was able to come [into this school year] feeling good.”

The Cavaliers close the regular season Friday afternoon with the Virginia/Panorama Farms Invitational in Earlysville. The ACC championships are Oct. 30 in Cary, North Carolina., and that’s race in which Asfaw has yet to have “a perfect day, I guess you could say.”

“I fell down and got hit in the head,” Asfaw said, “and I ran the rest of the race with my eyebrow bleeding everywhere, and I had to get stitches after the race.”

At this year’s ACC meet, Asfaw will be among the favorites, but he’ll approach it with the even-keeled demeanor for which he’s known. “I don’t like making super specific goals,” Asfaw said. “Really, I just like to be in the moment. We’ll focus on just doing the best I can in the moment and taking everything one step at a time.”

He’s on track to earn his bachelor’s degree in May. He’ll have eligibility remaining in all three sports, though, and hopes to continue his running career while in graduate school at UVA.

“Absolutely,” Asfaw said. “As of right now, that’s my plan.”

Owens Highlights Cavaliers on Day One at Virginia Tech Invitational