CHARLOTTESVILLE –– Like his team, Nate Savino has been up and down this season. But on a night when the Virginia Cavaliers desperately needed a strong performance from him, Savino delivered on the road in a hostile environment.

“That’s what you play for,” UVA pitching coach Drew Dickinson said. “You play to have those moments and those experiences.”

After UVA and Virginia Tech split the first two games on their ACC series in Blacksburg, Savino took the mound for the finale Sunday night. Dickinson said Monday morning that he would have been thrilled if Savino had worked five good innings, “because our bullpen was stacked and ready to go.”

Savino did better than that. He pitched into the eighth inning before giving way to Blake Bales. The Wahoos led 6-1 when Savino departed, and that was the final score as they won their fifth consecutive series against Hokies.

“Obviously, when you have an opportunity to win the series against your rival, you want to do that,” head coach Brian O’Connor said Monday morning, “and that was just a good, uplifting weekend in a great environment. Virginia Tech had a lot of fans there, and they were very, very vocal, and I thought it was a lot of fun. Our kids really enjoyed it. And in a way, it was great to be kind of back to baseball: with people in the stands and a lot of emotion. I know our guys really thrived on it, and it was good.”

In their bid to return to the NCAA tournament, which they won in 2015, the Cavaliers (22-20 overall, 13-17 ACC) have little margin for error, but the pressure didn’t faze Savino. The 6-foot-3 left-hander walked none, struck out two and scattered six hits Sunday night. The seven innings were by far the most he’s pitched this year.

“Just a great step forward from him for his personal development and confidence as well,” Dickinson said. “Confidence in this game goes a really, really long way.”

The Cavaliers’ confidence is growing too. In late March, after dropping two of three games in its series with Miami, Virginia was 10-13 overall and 4-11 in ACC play. Since then, the Hoos have won four of five ACC series.

“We’re been in playoff baseball the last four or five weeks to give ourselves a chance to get to the NCAA tournament,” Dickinson said.

O’Connor said: “We certainly dug ourselves a pretty deep hole in the first half of the year, but we’re climbing out of it and playing some good baseball.” 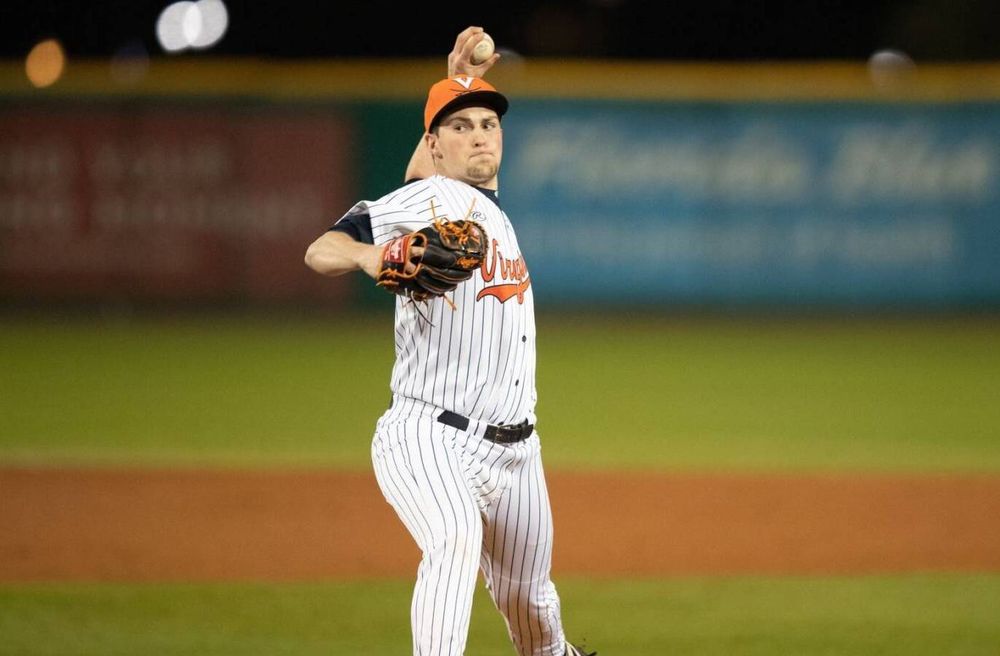 Virginia Tech students turned out in force for this series at English Field. But they had little to cheer for most of the weekend––UVA won series opener 18-1 on Friday night––and Savino’s satisfaction was evident as he shot a withering look at the Hokies’ fans on his way to the dugout in the eighth Sunday night.

O’Connor liked the emotion Savino (2-2, 3.51 ERA) showed and said it “was great to see him pitch such a great, dominant game, and then for him to do it against your rival is a big step forward for him.”

The atmosphere at English Field “brought the best out in our guys, and also, too, we were in a situation where we needed to win,” O’Connor said. “When we dropped Saturday’s game we needed to win last night’s game, and to see them emerge on top and find a way, it was like a playoff environment, so it was great to see.”

The Cavaliers’ many standouts in Blacksburg included freshman Kyle Teel, whose heroics are nothing new. Teel capped a stellar weekend by going 2 for 4 on Sunday, with his second home run of the series. In the three games against Tech (23-17, 16-14), Teel went 5 for 14 and drove in six runs.

“He’s not afraid of anything,” O’Connor said. “He doesn’t back down from anything. You can see that that’s the way he plays. He plays the game with his heart on the outside of his jersey. Just a very, very emotional, tough, competitive player, and that showed out this weekend for sure.”

Like Teel, Savino arrived on Grounds as a heralded recruit. A graduate of Potomac Falls High School in Northern Virginia, Savino was the state’s Gatorade Player of the Year in 2019 and was ranked No. 4 in the nation’s Class of 2020 by Baseball America.

Savino enrolled at UVA in January 2020, and by the time the COVID-19 pandemic shut down college sports that March, he had become the team’s Sunday starter. In his final appearance in that abbreviated season, Savino earned the victory as Virginia clinched a series win over then-No. 7 NC State at Disharoon Park.

He returned to Charlottesville last summer in terrific shape, but consistency eluded him early this season. Savino didn’t move into the weekend rotation until mid-April, and he was far from dominant in starts against Clemson, Louisville and Duke.

“If you look at the games where he’s quote-unquote struggled, where he’s put himself in trouble,” Dickinson said, “it would be like he’d walk a left-handed batter with two outs and nobody on, and then give up a double.”

For a pitcher, Dickinson said, learning to “manage the game” is essential. “If I put somebody on base, via walk or via hit by pitch, I have to as a pitcher step up and make the pitch and get the desired result. That’s what good players do, and he did that yesterday, and it was great to see.”

In the first inning, Savino retired the Hokies’ first two batters, then gave up three straight singles. Virginia trailed 1-0, and Tech fans were in full voice.

“A double there and it’s 3-0, and everything changes,” Dickinson said “We’re scrambling to get somebody in the game from the bullpen, and it changes everything.”

Savino escaped with minimal damage. With runners on first and third, he induced a ground-out to end the inning.

There are moments when players “kind of emerge and step forward,” O’Connor said, “and I thought last night was one of those nights for Nate Savino.”

An exam break is coming up for the Cavaliers, but first they’ll take on VCU. The teams will meet at 6 p.m. Tuesday at Disharoon Park. The Rams (27-14) have won 11 games in a row and defeated the Hoos 5-3 on April 20 at The Diamond in Richmond.

Virginia will close the regular season with series against Wake Forest (May 14-16 in Charlottesville) and Boston College (May 20-22 in Chestnut Hill, Mass.).

O’Connor said he’s not sure how many victories the Cavaliers need to be assured of an at-large bid to the NCAA tournament, but he believes they must win their series against Wake and BC. A victory over VCU would help, too.

“I’m not on the selection committee, but I’d like to not leave it in somebody else’s hands,” O’Connor said, “and I think if we do that, what we will have done down the back half of the stretch in the league will be pretty impressive.”