The Virginia Cavaliers spent much of Sunday at the University of South Carolina’s Founders Park, where in hot, humid conditions they played two baseball games that between them lasted more than seven hours. Midnight had come and gone by the time the team returned to its hotel in Columbia.

UVA head coach Brian O’Connor, who’s not given to hyperbole, called it “one of the great days in our baseball program’s history.”

A loss in either game at this NCAA regional would have ended Virginia’s season. But the third-seeded Wahoos won both, eliminating second-seeded South Carolina 3-2 in the afternoon and defeating top-seeded Old Dominion 8-3 at night.

In each game, UVA received sterling pitching stints from unlikely players: Matt Wyatt against South Carolina, Griff McGarry and Brandon Neeck against ODU. And now, after battling back through the losers’ bracket in this four-team regional, the Cavaliers are in position to make more history.

In O’Connor’s 18 seasons as their head coach, the Hoos have advanced to the College World Series four times and won the NCAA title in 2015. They’ve won six NCAA regionals under O’Connor. Never, however, have they opened an NCAA tournament with a loss and then responded with four straight victories to capture a regional.

With another win over ODU (44-15), the Cavaliers (32-24) would pull off that feat. In a game ESPNU will televise, the in-state rivals will meet at 5 p.m. Monday, with the winner advancing to a best-of-three NCAA super regional against Dallas Baptist or Oregon State at a site to be determined.

The Hoos fell 4-3 to South Carolina on Friday afternoon, their 11th straight loss in the series. But they bounced back to oust fourth-seeded Jacksonville on Saturday and then won two NCAA tournament games in the same day for the first time under O’Connor.

“It’s been an exciting journey so far,” UVA designated hitter Devin Ortiz said late Sunday night. “After losing that first game, we knew our backs were against the wall, and I think that’s something that’s been driving us this weekend. I’m just happy we have another opportunity [Monday night], and hopefully we take advantage of it.”

As his team prepared for its first NCAA tournament appearance since 2017, O’Connor showed his players videos from regionals UVA had won.

“None of them looked like this,” O’Connor said. “With every [regional], it’s a different journey. Sometimes you go 3-0 and you play a great baseball in every facet. Sometimes it’s a struggle, and you gotta come from behind. Sometimes you go 2-0 and lose a game and you gotta win the next one … This is the most challenging path, but this team has been hardened the last two months, and I think the strength that they have gained from what they went through the last two months has proven to be really, really important for them the last few days.”

In the elimination game against South Carolina, Alex Tappen had a solo home run, and Ortiz smacked a two-run homer Sunday night to give UVA a 4-0 lead over the Monarchs, who have never reached an NCAA super regional. The story of the day for Virginia, though, was its sensational pitching.

“Amazing performances all the way around,” O’Connor said.

Against the Gamecocks (34-23), sophomore right-hander Matt Wyatt, in only his second start of the season, struck out eight and allowed only two hits in five scoreless innings.

“This game was won by him rising up and giving us five innings,” O’Connor said. “He was terrific, in complete command.” 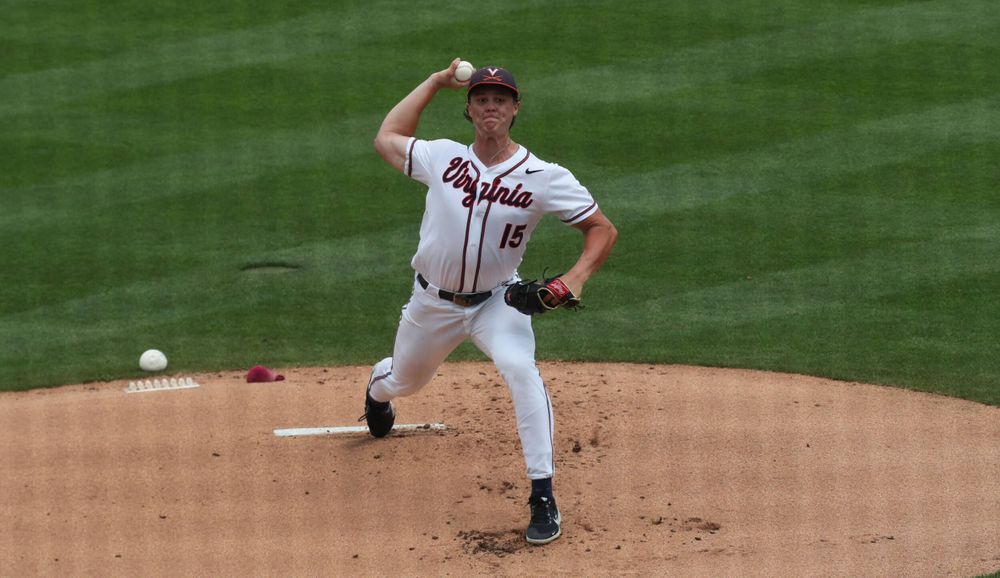 In his other start, March 24 against Liberty in Lynchburg, Wyatt didn’t make it out of the first inning. On Sunday, the 6-4, 210-pound right-hander showed why the Cavaliers remain so high on him.

“Matt has elite stuff,” O’Connor said, “and I think in everybody’s career, guys that end up being great, there’s a game, a day, that they step forward and emerge, whether that be a pitcher or a position player. That was Matt Wyatt’s opportunity today, and he seized the moment and stepped up for his team, and I know he’s going to be able to use this as positive momentum in the rest of his career.”

Senior right-hander Blake Bales, who’s pitched brilliantly in relief all season, took over for Wyatt to start the sixth but lasted only two batters before leaving with an arm injury. Junior right-hander Zach Messinger worked the next 1.1 innings, the highlight of which was a pivotal double play he helped turn.

Then closer Stephen Schoch took over. A graduate student who’s playing his sixth season of college baseball, Schoch pitched the final 2.1 innings against USC, striking out five and allowing no hits and no runs. He ended the game by striking out Joe Satterfield, after which Schoch heaved his glove toward the outfield, as he’s wont to do after big saves.

That set the stage for what followed in the Cavaliers’ second elimination game of the day. McGarry and Neeck combined on 24 strikeouts, a single-game record for UVA.

There’s a saying in baseball, O’Connor noted late Sunday night, that if “you stay around this game long enough, you’ll see something maybe you haven’t seen before, and to think that we had 24 strikeouts tonight from a pitching standpoint, it’s amazing.”

That was the fourth game in three days for the Hoos, and their options on the mound were limited. O’Connor and pitching coach Drew Dickinson opted to start McGarry, a senior whose control problems have marred his UVA career.

In his most recent start, against VCU on April 20, McGarry had issued three walks, hit a batter, and recorded no outs before being lifted in the first inning. Against ODU, the 6-2, 190-pound right-hander had the Monarchs on their heels.

McGarry, throwing nearly 100 mph at times, fanned the first six ODU batters he faced. He totaled eight strikeouts before leaving in the fourth inning with a cut on his right thumb. 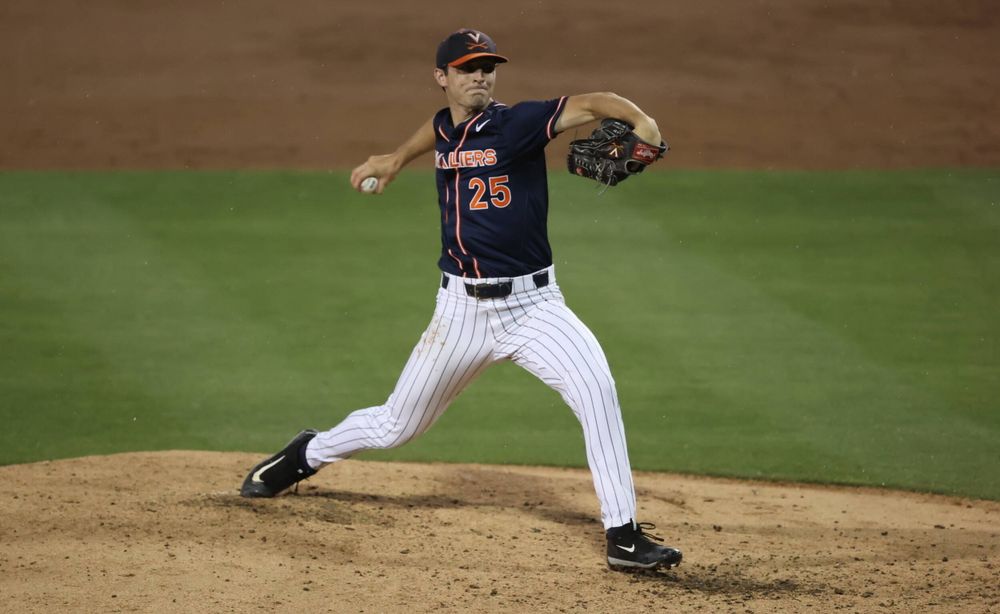 Neeck was all that and more in a mind-boggling relief appearance. Before Sunday night, the junior left-hander had never worked more than 2.1 innings or thrown more than 50 pitches as a Cavalier. Against ODU, he threw 102 pitches in 5.2 scoreless innings, striking out 16, walking two and allowing three hits.

His 16 strikeouts set a program record for an NCAA tournament game.

“What an amazing performance,” O’Connor said. “I talked about it after the first game [Sunday], that there’s certain games in players’ careers where they emerge. Earlier today, it was Matt Wyatt and tonight it was Brandon Neeck. The amount of confidence a player can get from a performance like that is phenomenal, and I’m just so proud of Brandon. He’s had a tough go of it.”

Neeck, who’s from Chappaqua, N.Y., missed the 2019 season with an injury, but he’s rehabbed diligently under the supervision of Brian McGuire, the team’s athletic trainer.

“It’s been a long, long journey, and a lot of ups and downs,” Neeck said. “Every time I go out there for us, I owe a lot of it to Brian McGuire, everything he’s done for me. Obviously, this is one of the highs. I’m just happy about it.”

This has been a season unlike any other for O’Connor, and not only because of the protocols the Cavaliers have had to following during the COVID-19 pandemic. Virginia was 11-14 overall and 4-12 in the ACC after losing at Georgia Tech on April 1. Since that defeat, however, the Hoos have been one of the nation’s hottest teams.

“We’ve kind of had this mantra since the beginning of April that we have to step up and guys need to deliver,” O’Connor said, “otherwise we’re not going to be playing in [June], and they have done everything to respond to it.”

None of the Cavaliers’ players had appeared in an NCAA tournament before this year. To see their resilience and grit “makes me proud, makes me happy,” O’Connor said.

“This is their opportunity. Myself and the other coaches, we’ve had many of these opportunities and many of these moments. It’s about [the players] …  It just makes me happy and smile to see them out there competing and having success. There are the memories that we talk about that these guys haven’t had a chance to experience in this uniform. This is their first NCAA tournament, and they’re getting a taste of it, and I can assure you it’ll be something that they’ll want to do again in the future.”

In the championship game, O’Connor said late Sunday night, the Cavaliers will “need guys to step up on the mound like we did today.”

About 10 hours later, UVA announced that Ortiz, who’s made only two pitching appearances this season, would get the ball first Monday night. In 2019, as a two-way player, Ortiz pitched in 18 games, all in relief, and posted a 4-0 record and 1.78 earned-run average.

Pitching alone won’t do it for his team Monday night, O’Connor knows. The Cavaliers are hitting .324 in this regional, with six home runs, and their defense has been excellent, too.

“I told the team after the [ODU] game,” O’Connor said, “it’s gonna take every guy on this team [Monday night] to give us a chance to win.” 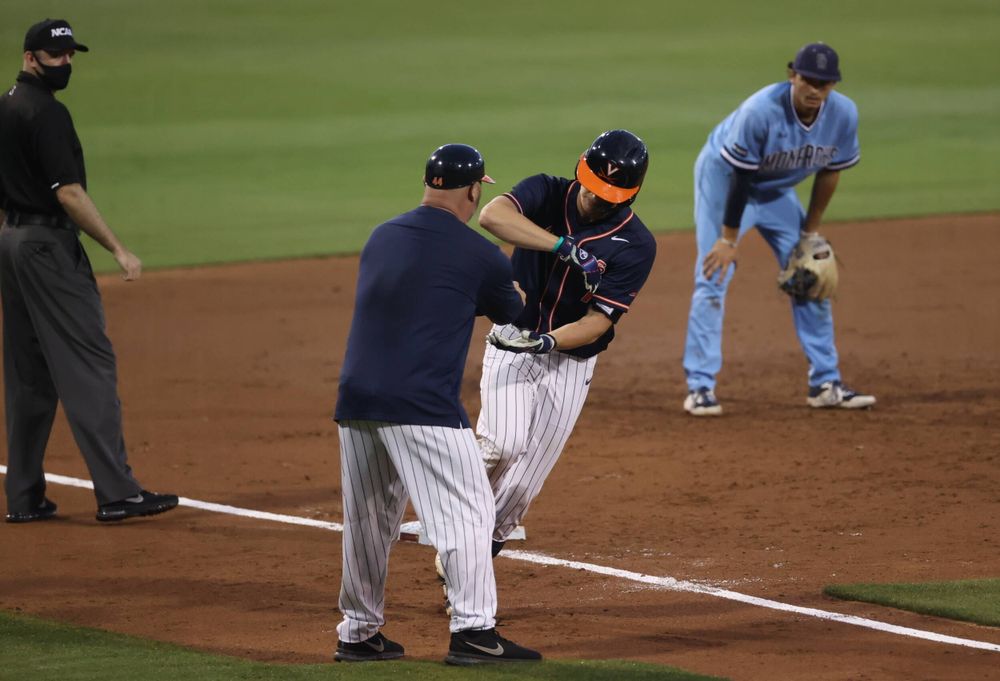