Never-Say-Die Hoos One Win from Omaha

Five times in the past nine days, the University of Virginia baseball team has played a game that could have ended its season. The Wahoos are 5-0 in those elimination games, with all of them coming at Founders Park in Columbia, S.C.

This a team that, after starting 4-12 in ACC play, earned an at-large invitation to the NCAA tournament by winning 16 of its next 23 games against conference opponents. In a remarkable season for the Cavaliers, their never-say-die mentality has become the dominant storyline, and so nothing that happened Sunday afternoon at Founders Park was especially surprising.

After losing 6-5 to Dallas Baptist on Saturday in the first game of this best-of-three NCAA super regional, UVA evened the series with a 4-0 win.

“The Hoos have heart,” senior pitcher Griff McGarry said. “I’m so proud and excited to be a part of this team. It’s definitely a special group of guys that want to go through the finish line. Everybody is willing to step up and do whatever they can to propel this team forward.”

The series finale is set for Monday at 1 p.m. at Founders Park. ESPNU is carrying the game, whose winner will advance to the College World Series in Omaha, Neb.

Who can say what the ceiling is for head coach Brian O’Connor’s latest team? After losing to host South Carolina on June 4 in the first game of the double-elimination regional in Columbia, UVA responded with four straight wins to advance to the NCAA tournament’s round of 16.

Then came the Saturday loss to Dallas Baptist, after which the pressure was again back on the Cavaliers. As usual, they handled it with aplomb.

“Nobody’s really thinking about, ‘Oh this could be our last game,’ ” McGarry said. “It’s more, ‘We’re playing to win today.’ ”

Asked why the Hoos have played so well in these do-or-die situations, junior third baseman Zack Gelof had no explanation Sunday. “I don’t really know what to say. No one really talks about it. But we just got to keep going and get ready for tomorrow, because it’s another elimination game.” 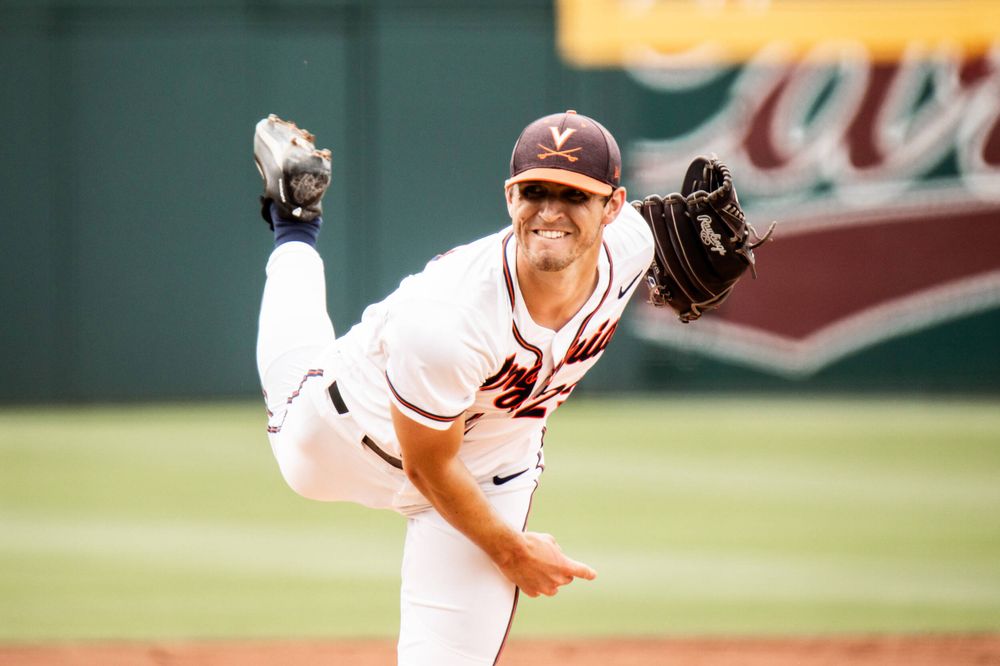 McGarry led the way Sunday, turning in a performance that will live in UVA lore. Before leaving the game in the top of the eighth inning with blood flowing from a blister on his right ring finger, the 6-2, 190-pound right-hander struck out 10 and allowed only two hits.

The 10 strikeouts are the most ever by a Cavalier in an NCAA super regional game.

Control problems have hindered McGarry for much of his four seasons at UVA, but he walked only three batters Sunday and all but silenced the Patriots’ powerful offense.

“He put us on his back today,” O’Connor said. “The kid’s had some good outings in his career, but none of them quite like that, when his team needed him the most. No matter what happens, he’ll have that for the rest of his life. I think he’ll pitch in this game for a long, long time, but [the] experience that he went through this year is just remarkable, and I’m just incredibly proud of him.”

In his final regular-season start, against VCU on April 20, McGarry walked three batters, hit another batter, and recorded no outs before being lifted in the first inning. But he bounced back from that disastrous outing and pitched well out of the bullpen late in the regular season.

When McGarry got an opportunity to start again, last Sunday against top-seeded Old Dominion in the NCAA regional, he struck out eight to help the Hoos extend their season again.

“He was our No. 2 starter for the first half of the year,” O’Connor said, “and things got away from him a little bit, and he hardly pitched for us for a month. And he kept working and working and made some adjustments. His spirit never changed. He was excited for his teammates that got the opportunity in front of him, and that’s really hard to do. It’s a really unselfish thing to do when you’re an elite-level prospect like he is.”

For the season, McGarry is 0-5 with a 7.53 earned-run average. But on the biggest stage of his college career, he’s becoming the pitcher everyone in the Cavaliers’ program believed he could be.

“It’s just amazing what you can do as a person if you just hang in there and you keep believing in yourself and you’re willing to make some adjustments,” O’Connor said. “It’s amazing what he’s done. I can tell you I haven’t seen it in my 18 years in this uniform, a kid do what he did this year, and hopefully he gets another opportunity [at the College World Series].”

Late in the season, O’Connor said, McGarry became noticeably sharper in intrasquad scrimmages, and pitching coach Drew Dickinson continued to advocate for him.

“I don’t know how many times in a week [Dickinson] would say to me, ‘Coach, I’m telling you, Griff McGarry is going to be huge for us. He’s better. He’s figuring it out,’ ” O’Connor recalled Sunday. “Fortunately, Griff put in the work and hung in there.”

McGarry said he benefited from the support of “my teammates and my coaches, having that behind me, giving me confidence when I needed it most.”

Dallas Baptist’s starter, Rhett Kouba, was as dominant as McGarry for most of the game. The sophomore right-hander retired the first eight Cavaliers he faced and didn’t allow a run through seven innings.

“He had us tied in knots,” O’Connor said. “Fortunately, McGarry was really, really tough and could match him, and then we were able to figure it out enough.”

In the seventh inning, each team led off with a double but couldn’t push a run across. In the eighth, the Hoos finally broke through. Gelof led off with a line-drive home run over the left-field fence.

“Just absolutely electric,” McGarry said of the response to Gelof’s homer. “I think we all knew right off the bat that that ball was going to get out of there.”

Zack Gelof goes yard, his 9th of the season!

Heading into Virginia’s series against ACC rival Georgia Tech, which started April 1 in Atlanta, Tappen was hitting .113, with no home runs. A month later, heading into UVA’s series at Virginia Tech, Tappen has raised his batting averaging to .173, but he still hadn’t hit a home run.

That’s hard to believe now. He has six home runs on the season, and all have come in UVA’s past 11 games. Tappen has hit safely in 15 games in a row, the longest such streak for a Cavalier this season, and his batting average is up to .250.

Early in Tappen’s career, he “was one of our dominant hitters,” O’Connor said, and he impressed in the fall of 2020. Once the season started, though, Tappen struggled.

“But there’s another example [of perseverance],” O’Connor said. “It speaks to the character of the young men in this uniform. He could have packed it up and said, ‘Listen, it’s not worth it,’ but he kept working, kept believing in himself. A window was created, and he jumped on it and seized the moment and rose up for his team, and he’s playing some of his best baseball he’s played in our uniform … I’m just proud of him and proud that he hung in there and kept fighting for his team.”

O’Connor did not disclose who would start Game 3 on the mound for the Cavaliers, but he said he expects to use multiple pitchers.

There was no panic on the Hoos’ part after their Saturday loss to the Patriots. O’Connor reminded his players that they’d been in that position many times already.

“It doesn’t matter who wins the first game,” O’Connor said. “It’s a series. It’s a matter of who wins the series.”

That will be decided Monday at Founders Park.

“It’s just exciting to be alive for another day,” Gelof said. 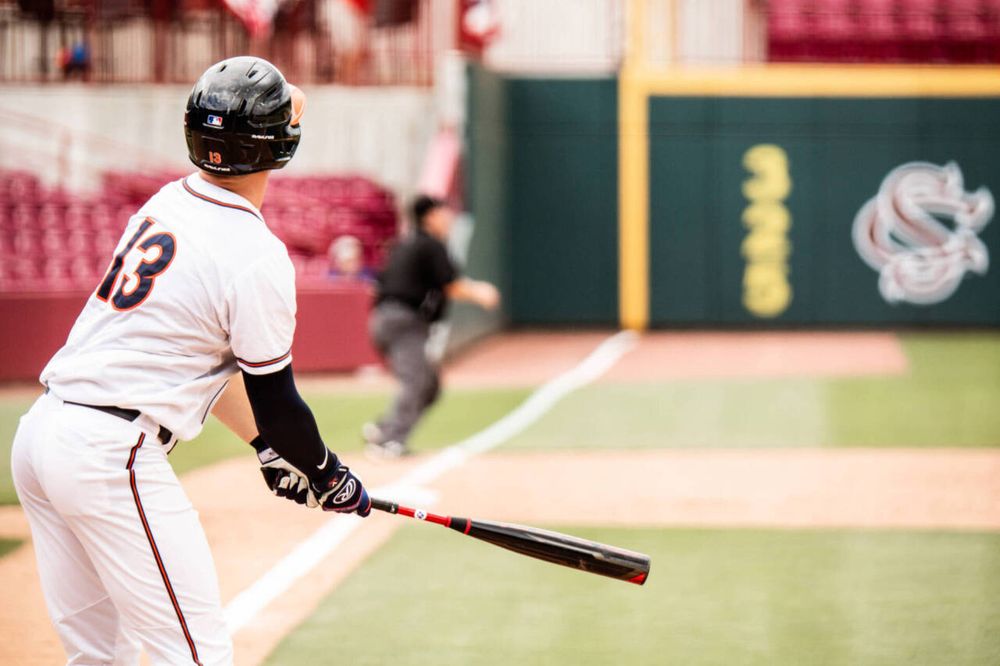