CHARLOTTESVILLE –– In late May, Jarod Verkleeren and Madelynn Holderman were married at Lake Raystown Resort in Pennsylvania, after which they honeymooned in Cancun, Mexico. Then came their move to this college town.

He and his wife are recent Penn State graduates. Holderman started work as a behavorial technican at a Charlottesville therapy center this week. Verkleeren is still a student, and he’ll start a master’s program in the University of Virginia’s School of Education and Human Development this month.

He’ll also be a regular at Memorial Gymnasium, home of UVA’s wrestling program. A 149-pounder who posted at 28-16 record at Penn State, Verkleeren has two seasons of eligibility left. He’s been working out this summer with the Cavalier Wrestling Club, a USA Wrestling Regional Training Center (RTC), and he’s excited about joining UVA head coach Steve Garland’s program.

“At Penn State, I definitely didn’t accomplish what I went there to accomplish,” said Verkleeren, who’s from the Pittsburgh suburb of Greensburg, Pa. 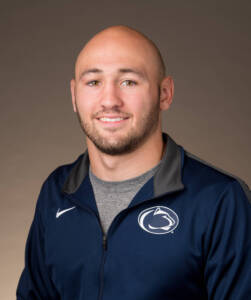 The Nittany Lions won two NCAA titles during Verkleeren’s four years in State College, and they might well have captured another in 2020 had the COVID-19 pandemic not shut down college sports that March. But Verkleeren also wanted to win an NCAA individual championship, and he didn’t achieve that objective.

“So I definitely have a lot more to prove,” he said. “But I have a lot of learning experience from Penn State. I really enjoyed learning from some of the best coaches and wrestlers in the country, and I plan to bring that here: not only to push myself and do the right things for myself––eat clean, work hard, get good grades––but also try to be a leader for the team.”

Once he decided to join another program as a graduate transfer, Virginia was a logical destination for Verkleeren. He’s known the Wahoos’ full-time assistant coaches, twins Travis and Trent Paulson, for years. Moreover, as a senior at Hempfield Area High School in 2016-17, Verkleeren visited UVA, where he met Jack Mueller, then a freshman in Garland’s program.

Mueller, who was NCAA runner-up at 125 pounds in 2019, is now a volunteer assistant coach at UVA. It’s taken a while, but he and Verkleeren are finally on the same team.

“Jarod’s an awesome kid,” Mueller said. “Whenever he’s in the rooms he lightens it up, makes everyone laugh. Nothing’s really changed there. He’s a big culture guy and fits in well right away, and I could see that back then too. I can see how he’s going to make an impact on our team and how he already has.”

At Penn State, Verkleeren redshirted his first year and then posted a 15-6 record in 2018-19. As a redshirt sophomore, he was 17-8 and had qualified for the NCAA tournament when the pandemic abruptly ended the wrestling season.

Knee and rib injuries limited him to two matches in 2020-21, but Verkleeren is healthier now. “I’m just getting my weight down and getting ready for the season at 149,” he said.

He has Type 1 diabetes, and that’s “not super easy to manage, especially wrestling at the collegiate level,” said Verkleeren, who earned his bachelor’s degree in health policy and administration. “But I’ve gotten good with it over the years. You have to be tough and disciplined and stay consistent, but it’s definitely doable and manageable, and I don’t think it’s going to hinder me from getting on the podium this year.”

Verkleeren’s familiarity with the UVA staff has eased his transition. The Paulson twins were assistants at their alma mater, Iowa State, when Verkleeren signed with the Cyclones in November 2016.

At the end of the 2016-17 season, however, Kevin Jackson stepped down as Iowa State’s head coach, and a new staff was hired. Verkleeren asked to be released from his letter of intent. When his request was granted, Verkleeren re-opened his recruitment and, after considering Virginia, ended up at Penn State.

To reconnect with the Paulsons has “been great,” Verkleeren said. “I wrestled with Trent the other day, and he’s super good. He’s still super strong and he’s in good shape, and he has a lot of good technique too, that I’ve been learning, tweaking the small things that I’m going to need to get on the stage and be an All-American. So I think they’re going to be great for me.”

Garland believes the addition of Verkleeren will help the Cavaliers’ program in multiple ways.

“No. 1, he brings experience,” Garland said. “He’s been on a national championship-winning team, with the national coach of the year. He brings that side of the dynamic, but he also brings [a strong résumé] individually.” 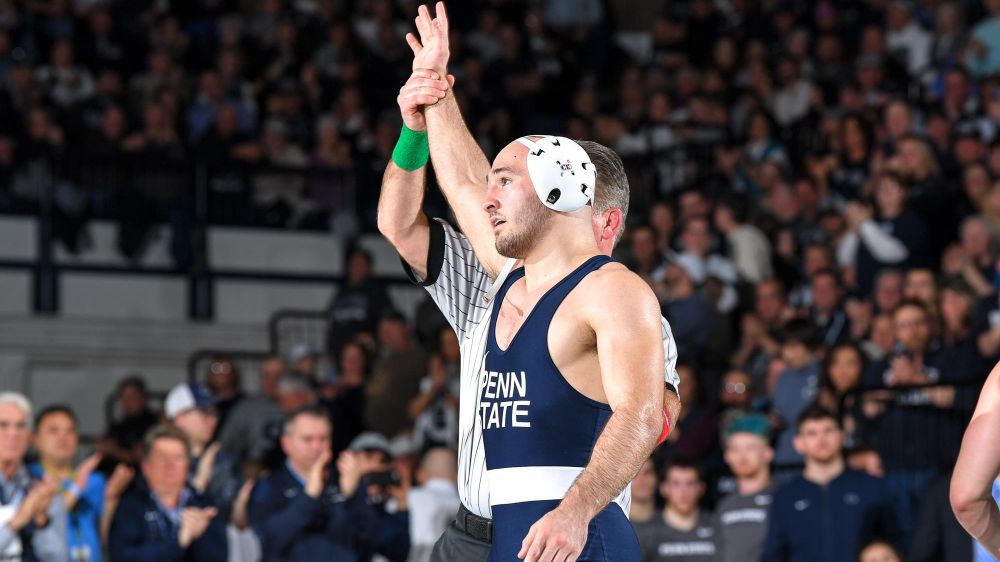 In the summer of 2015, Verkleeren wrestled for Team USA at the Cadet World Championships in Bosnia and Herzegovina and won the title at 63 kilograms (139 pounds).

“He’s literally been around the world wrestling the best guys in the world,” Garland said, “and so he brings experience on that level. Then the last thing he brings is a very light-hearted spirit. He loves to play wrestle and have fun, and he’s in the room nice and relaxed. Nothing ever rattles him. I’m a pretty intense dude, as you know, and Mueller is wired just like me. [UVA 197-pounder] Jay Aiello is as intense as it comes, too.”

“Jarod walks in the room with a big smile on his face and says, ‘Hey, guys, let’s play some spike ball and warm up and have some fun,’ ” Garland said, laughing. “But then when it comes time to wrestle, he’ll wrestle for two hours straight-–with a big smile on his face, too. He’s almost like childlike in the way he approaches it, which I think is a very welcome thing for our program.”

Grateful for the last 4 years at PSU and thankful for everyone who reached out to me during this process. After lots of prayers, I am very excited for the opportunity to wrestle and pursue a Masters Degree at The University of Virginia. 🤼‍♂️🎊#GoHoos #Believe pic.twitter.com/E1CJHwZPxQ

“I think it’s awesome,” Garland said. “Look, I’ve got two daughters, and I love the fact that our guys take relationships that seriously … Real-life relationships are layered with conflict, adversity, disagreements, resolution, grace. Nothing’s perfect, and for our guys to be so mature and so focused on those type of relationships, it’s just incredible to me. They’re a lot more mature than I was at that age, that’s for sure.”

Mueller’s maturity is apparent on the mat, too, Mueller said.

“I’ve rarely wrestled guys that have the wrestling IQ that he does,” Mueller said, “and I think that he has the ability to shock the national stage. He’s shown that in high school, and he’s beaten some really good guys in college, so getting him primed up and ready for competition is the next big step. I’m really excited to see what he does next season.”

If there’s a common denominator with wrestlers who come up through legendary head coach Cael Sanderson’s program at Penn State, Mueller said, it’s their passion for the sport.

“They’re very vocal about their love for wrestling, quote-unquote,” Mueller said. “What does that mean? Some people say they love it, but they go bangs their heads against the wall and don’t get anything done. They just go 120 percent each day, and they don’t grow as wrestlers, because they never take a step back, they never try to learn technique, they never try to grow in a sparring situation.

“When you wrestle Jarod, it’s different. He’s very meticulous. He’ll stop you and ask you what you did there. Even if I’m doing something wrong, he’ll be like, ‘Here, try this.’ And most people, especially in wrestling, which is a one-on-one combat sport, they have too much pride to stop and help their partner. So what he brings is a very mental side of the game.

“He can help our younger guys learn, and even our older guys, help us just take a step back and re-evaluate what we’re doing, in terms of our technique, or even little things. I think [PSU wrestlers] have some kind of mental game figured out, and I think Jarod will help spread that with the UVA wrestling culture.”