CHARLOTTESVILLE –– It’s not every day––or even every decade­­––that an Olympic medalist with four years of eligibility joins a college program. But that’ll be the case at the University of Virginia when Emma Weyant arrives on Grounds later this month.

At the Olympic Games in Tokyo, Weyant won the silver medal last month in the 400-meter individual medley. She was one of four future, current or former Cavaliers to swim for Team USA, whose assistant coaches included DeSorbo.

In the days that followed Weyant’s race, rising sophomore Alex Walsh won silver in the 200 IM, and Kate Douglass, a rising junior, took bronze in that event. Paige Madden, who capped her illustrious college career in March by leading Virginia to its first NCAA title, swam the second leg on the 4×200 freestyle relay team that won silver for the United States.

“Which was amazing,” Weyant said.

“It was awesome,” DeSorbo said.

Weyant, who’s from Sarasota, Fla., signed a letter of intent with UVA with November 2019, with the intention of joining DeSorbo’s program last year. Then the COVID-19 pandemic hit, and she re-assessed her plans.

After a short stay in Charlottesville last summer, Weyant returned home to Florida. She stayed in school and took classes online in the fall, but she chose to redshirt for the Hoos in 2020-21, training instead with Brent Arckey, her coach in the Sarasota Sharks club.

“It was a really difficult decision,” Weyant said, “but I talked to Todd and my home coaches, and we decided that was kind of the best thing for me at the time. I had a really good training situation in Sarasota, so there weren’t as many risks, and it was more consistent, for sure. Being at home in a COVID year was probably more beneficial for me. Sitting at home was really hard, I will say, but I’m just so excited to get back up there.”

She didn’t take classes in the spring, opting to focus on her training as the U.S. Olympic Trials approached. “I wanted to do everything I could to stay focused on that, so that when I come back in the fall I can go all in with everything UVA,” Weyant said.

In March, at the NCAA Championships in Greensboro, N.C., Virginia totaled 491 points to win going away. (NC State was second with 354, and Texas placed third with 344.5.) Weyant followed the Cavaliers from Sarasota.

“They all did amazingly well,” she said, “and I was a little sad that I couldn’t be there, but I was so proud watching them, and I’m just so excited to get to be there and hopefully contribute to the team, because I know they’re going to keep going. Todd has big goals for the team, and I’m super excited to be a part of it.”

Weyant, one of the most sought-after recruits in the Class of ’20, committed to Virginia as a junior at Riverview High School.

“One of the big things Todd always talked to us about in recruiting was what the goals were for the team and how they were going to progress through the years, and I thought that was super cool, to be a part of that. They won their first national championship this year, and they put a large amount of people on the Olympic team, so everything that Todd has put as a goal, they’ve achieved, which is super cool. And another thing was the team [culture]. I really didn’t find another team that was similar. This group of people is just so driven, and they have fun while they’re doing it.” 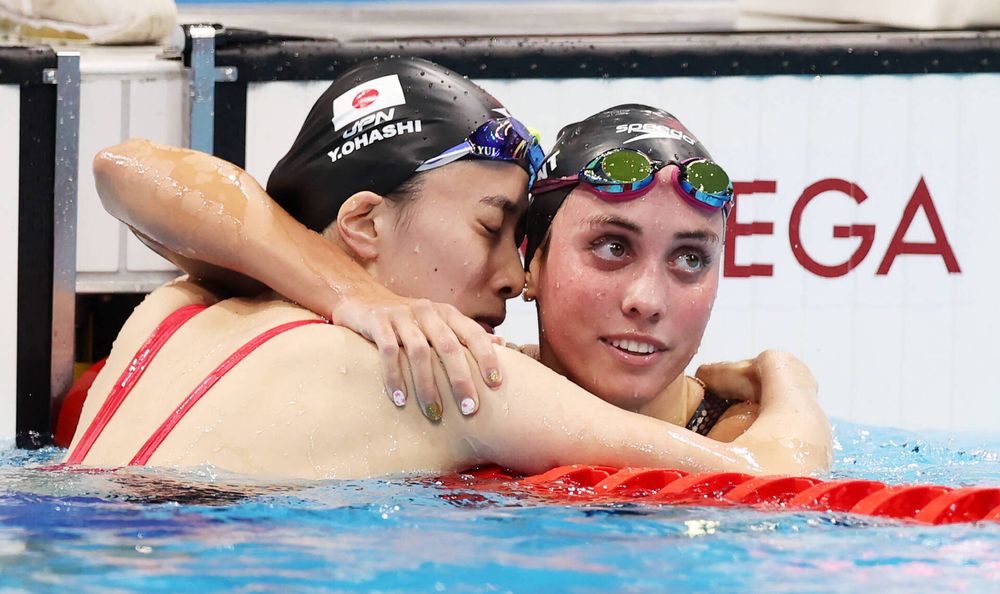 At UVA, the men’s and women’s teams train together, and that dynamic also appealed to Weyant. The Virginia men placed ninth at the NCAA championships in March, and they figure to take another step forward in 2021-22.

The UVA women must replace several outstanding swimmers, including Madden, who won three individual titles at the NCAA championships, but to a strong nucleus will be added talented newcomers like Alex Walsh’s sister, Gretchen, and Weyant.

“My goal going into this was to contribute to the medal count,” Weyant said. “Especially in this event, [Team USA has] a lot of history of medaling, so I really wanted to keep that streak alive. Obviously, gold would have been amazing, but I’m super happy. I’m proud of it, and I had a best time, which was cool.”

Sooooo this is the coolest thing ever… Thank you @DickieV !! Grateful to represent the USA and honored to bring a medal back to Sarasota! 🇺🇸 https://t.co/VxolTzV05U

With the pandemic still hitting Japan hard, these Olympics differed in many ways from the ones Weyant had grown up watching. Still, she said, she loved her experience at the Tokyo Aquatics Centre.

“Even though there were COVID protocols and there weren’t fans, being part of a team like Team USA, you could look up in the stands for every swim and hear everyone cheering,” Weyant said. “So it didn’t feel that empty when we were actually in the arena, and having all our teammates there and racing alongside everyone and getting to actually compete, that was amazing, because we didn’t know if that was going to be a possibility for a really long time.”

She roomed with Walsh in Tokyo and interacted often with Team USA’s other Hoos as well.

“Getting to be there with so many of my future UVA teammates was really cool,” Weyant said. “I think we made up a large sum of the team in itself, so getting to kind of get an inside look at like what UVA training will be like, and having Todd there, was really cool.”

Nine hundred miles away in Sarasota, Weyant was unable to train with the Cavaliers during the 2020-21 school year, but they made sure she knew she was still part of the program.

“Our team and Emma, in conjunction with each other, did a really good job over the course of the year of just staying in touch and staying connected,” DeSorbo said.

Weyant said: “We had group chats going on the whole year, and we Zoomed a couple times, and all my roommates for next year, we’re really close. We’ve known each other for a really long time, and I’ve been on trips with Alex a bunch of times, and we’ve been roommates on all the trips as well.” 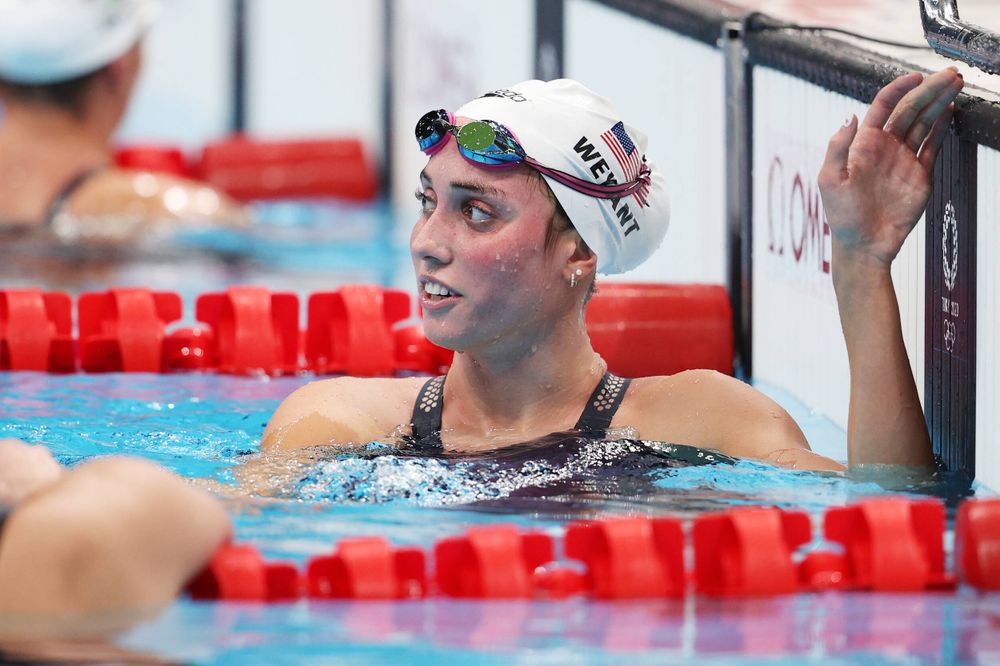 In the coming school year, Weyant will share an apartment with three teammates: Alex Walsh, Anna Keating and Abby Harter.

“She’s going to be a little bit of a non-traditional first-year,” DeSorbo said, “and she’ll hit the ground running, which will be good for her and the team.”

Weyant is proficient in all four strokes, and her versatility will give the Cavaliers’ coaches multiple options as her college career unfolds.

“We will continue to put a major emphasis on long-course training and international success, and one of our biggest goals for her, along with the rest of our team, will be [the 2024 Olympics],” DeSorbo said. “But there’s a lot that’s going to go on between now and then.”

Long-course pools, which are used at most international meets, including the Olympics, are 50 meters long. NCAA meets are held at short-course (25-yard) pools.

“Emmy has not focused on short course very much over the last two years,” DeSorbo said. “I think if you look, her long-course times are significantly better than her short-course times. Not that we’re going to put more of an emphasis on it, but when you have the excitement and motivation of NCAAs and trying to win an NCAA title as a team, I think we’re going to see some pretty significant improvements in her short-course swimming this year, too.

“I think that’s something that’s going to be exciting and something she hasn’t focused on, so I think that’ll keep her motivated and really excited going forward.”

For the 400 IM final, Weyant’s parents and her siblings (she has three sisters) gathered July 24 at a watch party at a restaurant in Sarasota. “Some of my other family was there and my whole Sarasota [club] team was there as well,” Weyant said, “so there were probably like 200 people there, which is crazy.”

During its telecast that night, NBC showed the watch party, Weyant learned later. “It’s so amazing to have that kind of support here,” she said, “and watching that video back is just super cool to me. I’m so thankful for them.”

The 2024 Olympics are a long way away, but “that’s definitely the goal,” Weyant said. “I would love the opportunity to get to represent Team USA again. Getting to go on trips like this and experience it, I think it only makes you want to get back to work sooner and start working towards the next one.”

For now, though, she’s staying out of the pool.

“It’s been a long time since I’ve kind of taken a break and taken a pause,” Weyant said, “and I think that’s probably important for me here, to kind of reset before I go off to school. So I’m gonna take a couple of weeks and then get back into the college season.”