CHARLOTTESVILLE – With hours to go until the 165-pound final, University of Virginia wrestler Justin McCoy sat back and watched his teammates try to salvage something positive from what had been a disappointing day for them at John Paul Jones Arena. What he saw inspired him.

At the ACC Championships, Virginia sent five wrestlers to the semifinals. Only one of them, McCoy, advanced to the finals. But on a day when NC State captured its fourth straight ACC title, the Cavaliers pulled themselves off the mat and stormed through the wrestlebacks.

All seven of them earned automatic berths in the NCAA championships, which starts March 17 in Detroit, as did McCoy, a redshirt junior who fell in the 165-pound final Sunday night. Moreover, UVA head coach Steve Garland hopes 149-pounder Jarod Verklereen will receive an at-large invitation to the NCAA meet.

Only once in program history have the Wahoos sent more than eight wrestlers to NCAAs.

“That’s what it’s about,” Garland said. “It’s about getting as many guys to the show as you can.”

The semifinal round started poorly for UVA, when McCormick lost by major decision at 125 pounds. Then Keating, the No. 2 seed at 157 pounds, was pinned in the first period. After the third-seeded McCoy prevailed at 165 pounds, where he avenged his regular-season loss to NC State’s Thomas Bullard, Aiello lost a close match to Pittsburgh’s Nino Bonaccorsi at 197. Finally, at heavyweight, the fourth-seeded Miller fell in overtime to top-seeded Nathan Traxler of Virginia Tech.

That was a serious momentum swing in the wrong direction for the Hoos.

“You could definitely feel it,” said Aiello, a graduate student who won the ACC title at 197 pounds in 2019-20. “You see Jake lose like that, in a funky position where he ends up getting pinned, and obviously I’m a guy that people look to as well, and I dropped the match, and Quinn also drops a match. It’s hard to come back from that, for sure.”

After the semifinal round, Aiello said, Garland met with the team “in the locker room and kind of challenged us. He said, ‘When your back’s up against the wall, you show who you really are.’ One of the themes we talked about [heading into the tournament] was adversity, how we’ve dealt with it this year, and how in the face of adversity we have continued to grow and continued to push through it. It just a great theme for this tournament because if you watched it, we faced a lot of adversity in that early round and pushed through it. Our back was up against the wall, and we showed what we were really made up.”

The team met again after the consolation finals, Garland said, and “I told them, ‘Guys, we went from having one of the worst rounds that I can remember to coming back and having just about as amazing a couple rounds as you can get.’ ”

At 141, the fifth-seeded Cedeno clinched a berth in the NCAAs by upsetting No. 2 seed Kizhan Clarke of North Carolina 5-0 in the consolation semifinals. In the third-place match, Cedeno knocked off Virginia Tech’s Collin Gerardi 7-5. Gerardi had edged Cedeno 1-0 in the first round Sunday.

“Wrestling is so mental,” Garland said. “Dylan gets this huge win over [Clarke], one of the best guys in the whole country. So all of the sudden he’s got confidence again. He’s lost to [Gerardi] twice, and he goes out and beats him. It’s amazing.” 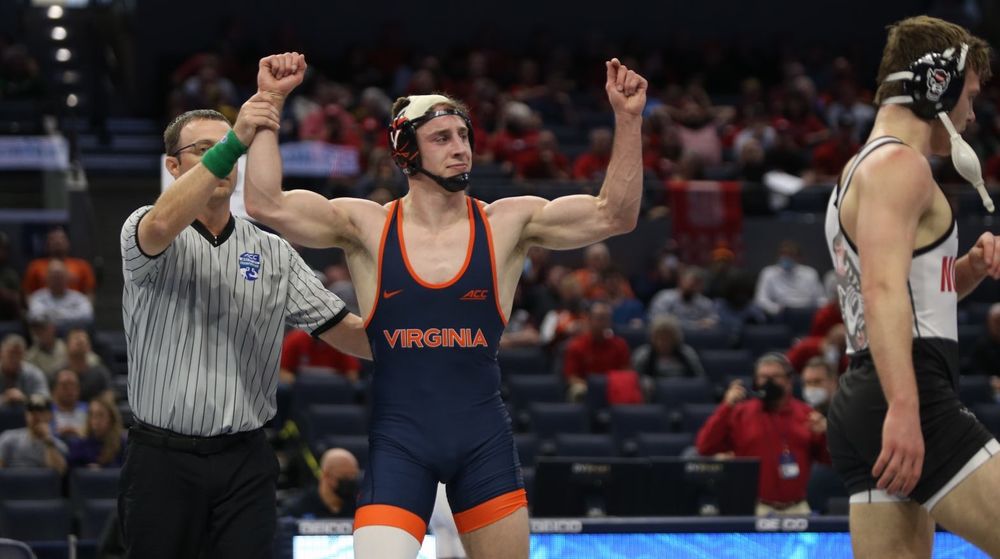 At last year’s ACC tournament, Aiello fell to Bonaccorsi in the 197-pound final. When they met Jan. 21 in a regular-season match, Bonaccorsi won again, and Aiello’s nemesis prevailed Sunday too.

“But Jay wrestled that kid a lot better than he did in the dual meet,” Garland said. “So that shows his growth. Every time you’re out there, you want to grow, and he got a little bit better.”

Aiello dominated his two consolation matches to assure himself a trip to Detroit.

“I think the biggest thing is just making it there,” Aiello said. “Yeah, it would be great to win an ACC championship, but I still believe that I can be an NCAA champion.”

In the 165-pound final, McCoy met the No. 1 seed, Pitt’s Jake Wenzel, who was the NCAA runner-up in that weight class last season. Wenzel recorded a first-period takedown and pulled away for a 7-0 victory.

“He’s a very technical wrestler,” said McCoy, who hadn’t taken on Wenzel before Sunday. “I feel like if I wrestle him again, I’m going to have a better game plan. You can watch and see what to do, but it’s better to feel that in a match, and I don’t think I executed it as well as I could have against a guy like that.”

He was happier with his performance in the semifinals, where he rode Bullard for the entire second period. That was the difference in McCoy’s 1-0 victory.

“I wrestled really well on that top in that match, which I haven’t done this year, so that’s a big improvement,” McCoy said.

“I didn’t turn [Bullard], but a lot of times this year I’ve let [opponents] get to their feet and I’m just like, ‘I’ll let them go. I can wrestle on my feet.’ I’ve been trying to really quit that mindset and just make the decision to say, ‘No. I’m keeping you down.’ ”

This was McCoy’s second appearance in an ACC final. He was runner-up at 157 pounds last season, after which he went 0-2 at the NCAA tournament. McCoy believes he’s better prepared to compete on that stage this year.

“I can’t wait for that opportunity,” he said. “I had an opportunity last year and felt like I held back a little bit, so I’m looking forward to letting it all out there.”

McCoy is from Fishertown, Pa., a small town about 35 miles south of Altoona. The Cavaliers’ cheering section at JPJ included his family.

“Winning that last match, I could hear the crowd,” McCoy said after his semifinal win. “It was awesome to hear that. I’m not a person who likes to really celebrate a bunch, but in the moment there I did a little flex. I got pumped up there, just because the crowd was loud.”

The Cavaliers’ performance in the semifinal round cost them in the team standings, and they finished fifth. Still, Garland said, many positives came out of a long day at JPJ.

“I just told my guys I’m so proud of them,” he said. “That was an impressive couple of rounds. There was a lot of good things happening there. And the crowd was great.” 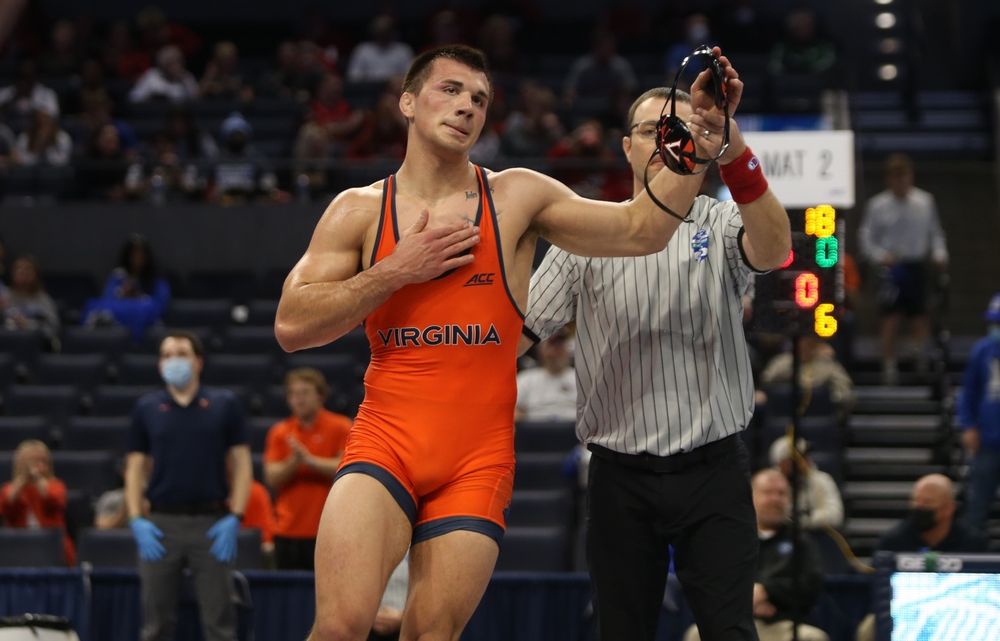