CHARLOTTESVILLE — The Canadian province of Nova Scotia is known for its lobsters, fishing industry and quaint seaside towns, among other things. It’s not known as a hotbed for Division I football talent, but that hasn’t deterred one of its exports.

Logan Taylor, a 6-foot-6, 295-pound sophomore, starts at left offensive tackle for Virginia, which opens ACC play Friday night at the JMA Wireless Dome in Syracuse, N.Y. Taylor was born in Lunenburg, Nova Scotia, a town of about 2,300 residents.

“Everyone kind of knows each other,” said Taylor, who lived in Nova Scotia until 2019, when he transferred to Episcopal High, a prestigious boarding school in Alexandria.

His coach at Episcopal was Mark Moroz, a fellow Canadian who’d been a standout offensive lineman at Wake Forest. Moroz marveled at the ease with which Taylor adjusted to his new surroundings.

“I was shocked, because when I left Canada to go to Wake Forest I had significant culture shock, and he handled that transition with such maturity,” Moroz, who now works in North Carolina, said this week. “To leave his hometown in Nova Scotia, which is a pretty small town, and then go to Episcopal and [fit into] the culture there, he handled it maturely. If he struggled, he didn’t let anyone know.”

On the football field, Taylor was “one of the most athletic kids I’ve ever coached and extremely coachable,” Moroz said. “I would show him something, and he would immediately get it. So that was the most impressive thing. Sometimes you get one or the other. You get coachable kids who don’t have athletic tools, or the opposite.”

Episcopal does not allow its students to graduate midyear, and Taylor wanted to enroll at UVA early. So he returned home to Nova Scotia after the 2019-20 academic year. Taylor committed to the Cavaliers in July 2020, then spent the fall at Park View Education Centre in Bridgewater, Nova Scotia. The COVID-19 pandemic wiped out his senior football season, but Taylor arrived at UVA as scheduled in January 2021.

Taylor was a well-regarded recruit, but the Cavaliers had a veteran offensive line last year, and he played in only two games as a true freshman. Then came a period of massive turnover. Bronco Mendenhall stepped down as head coach, and Virginia lost its top six offensive linemen, including tackles Bobby Haskins and Ryan Swoboda, who transferred to Southern California and Central Florida, respectively.

Offseason setbacks slowed Taylor’s progress. In December, he had surgery to repair a torn labrum in his hip, and that limited his participation in the Cavaliers’ first spring practice under Tony Elliott, Mendenhall’s successor as head coach. Then, on the eve of training camp this season, Taylor came down with an illness and “lost a bunch of weight,” he said.

“We wanted him to come in close to 300 pounds,” Elliott said, “and he came in closer to 280. So now he’s starting to build himself back up.”

That Taylor attained such stature was not surprising. His mother stands 5-foot-11, his father is 6-foot-9, and they played basketball. Taylor grew up playing soccer. “Football was not big,” he said.

A family friend, however, started a football program and encouraged Taylor to try the sport. He progressed in the sport and was playing for Sir John A. Macdonald High in Halifax when his family heard about Episcopal from a man whose son was a student at boarding school.

“He was like, ‘It’s a very good academic school and a good sport school, so you should look into it,’ ” Taylor said.

For a budding football standout who was also serious about his schoolwork, the move made sense. “His family made the sacrifice to send him down to the States so he could learn and develop more as a football player,” said Garett Tujague, UVA’s offensive line coach.

His teammates at Episcopal include Elijah Gaines, who’s now a reserve cornerback and special teams standout at Virginia. (UVA tailback Perris Jones also graduated from Episcopal, but he and Taylor did not overlap there.)

After the pandemic hit in March 2020, Tujague and Taylor communicated primarily online.

“Every time we could we were getting on Zoom with Mom and Dad,” said Tujague, who’s in his seventh season at Virginia. “I think that was a huge part of them trusting me with their son. But when you’re from Nova Scotia and you have an opportunity to go and get a degree from the University of Virginia, that’s pretty powerful. And then also the chance to play in the ACC, that was a huge draw for him as well.” 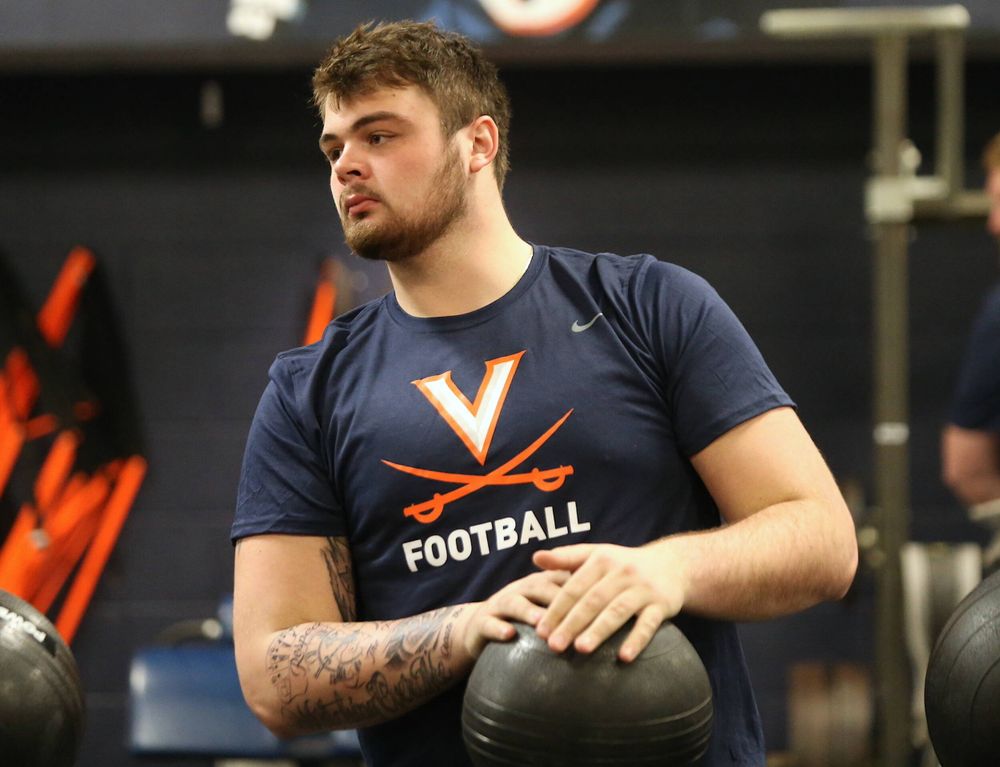 Virginia takes a 2-1 record into its game with Syracuse (3-0, 1-0). The Wahoos’ biggest question mark coming into the season was their rebuilt offensive line, and the group has struggled at times, most notably at Illinois on Sept. 10. The Fighting Illlini dominated up front in a 24-3 win over UVA, which gained only 222 yards in Champaign.

Such growing pains were probably inevitable. Taylor, who wears jersey No. 68, is a guy “that hasn’t played that much,” Elliott said. “So he’s thrown into the fire, and now he’s playing left tackle and right tackle, and he could possibly be [switching positions] in the middle of a series.”

As much as that defeat stung, Taylor said, it “was a good thing for us to realize we’ve always got to be together, we’ve got to become a group and we’ve got to just lead the way. So it was it was a good shock for us that we are able to learn from.”

“I thought he bounced back really well,” Tujague said. “I thought ODU had very good edge players, so he was able to build his confidence. But this will be another great test against a great team up in New York, with good players and multiple fronts and schemes defensively, and I think it’ll be a good test for him to see where he’s at. The biggest thing he has to do is play within his ability and not try to over-do or over-reach.

Had Haskins or Swoboda—or both–decided to return to UVA for another season, Tujague might have had the luxury of bringing Taylor along more slowly. But Tujague doesn’t waste time pondering such scenarios. He knows how quickly a depth chart can be upended, and he’s confident Taylor will be equal to the challenge.

“Everybody has a plan until they get punched in the mouth,” Tujague said, smiling. “That’s the thing: Any of these kids is one ankle twist away from having to be that guy. So Logan’s ankle twist may have happened sooner than later, but I also think he’s got the potential to be an extremely elite offensive lineman, and what we do in our system, I think that plays to his strengths a lot more.”

Taylor, who plans to major in sociology and minor in entrepreneurship, said UVA’s offensive linemen are “all working together to try to do the best we can and try to build a good culture here.”

Their next test comes Friday night in a game ESPN will televise. Syracuse has allowed only 16.7 points per game, so “having the opportunity to step in that arena, away from home, that’s going to be huge,” Tujague said.