Resilient Hoos Ready for Next Challenge

CHARLOTTESVILLE — The University of Virginia women’s soccer team has played 22 games this season, compiling a record of 16 wins, three losses and three ties. Two of those draws felt more like losses to the Cavaliers.

On Oct. 9, at Klöckner Stadium, Virginia gave up a goal to Syracuse in the 89th minute and had to settle for a 2-2 tie.

Four nights later, at Thompson Field in Blacksburg, UVA built a 3-1 lead, only to see Virginia Tech score two goals in the final 10 minutes, the second one with 41 seconds left in the match.

“Obviously at that point we were disappointed in letting games slip away,” Virginia head coach Steve Swanson said Monday. “Maybe we were in a position to win the game and we drew. But sometimes you need to go through those kinds of things to learn, and those were tough experiences for the team, but maybe necessary.”

In the NCAA tournament’s round of 16, UVA was the team playing from behind. Against host Penn State, one of the tournament’s No. 2 seeds, third-seeded Virginia trailed 1-0 at halftime and 2-1 with less than four minutes left in the second half. But the Wahoos pressed on. They had dominated the run of play in the second half, and they pulled even in the 88th minute when freshman Maya Carter headed classmate Maggie Cagle’s cross into the goal.

“We played to the end,” UVA forward Haley Hopkins said, “and during ACC play, that wasn’t [always] the case.”

Then came overtime, whose format the NCAA altered this year. Gone is the golden goal. Teams now play two 10-minute OT periods, after which, if the game remains tied, a penalty-kick shootout is held.

That wasn’t necessary on an arctic Sunday night at Jeffrey Field in State College, Pa. In the fourth minute of the first overtime, another Cagle assist, this one a pass to Hopkins, produced the goal that put the Hoos ahead 3-2, and that’s how the match ended after 110 minutes of fiercely contested soccer.

“We played and left absolutely everything we had out on the field tonight for 20 minutes [of overtime],” said Hopkins, a graduate student who leads Virginia with 13 goals this season. “We didn’t have anything left after the full 90, but everyone kicked it into another level. That was the first overtime that we’ve had to play, so it really was a good trial for us. We played to the absolute best of our ability.”

Swanson said: “I’m really proud of our team and the way they fought. They were relentless, and I think in many ways they were unwilling to accept anything but a result. I think, as a coaching staff, that was the thing that really stood out to us: the sheer determination from the team, when things didn’t look good, to come back and to fight their way back in it and then to pull it out. It says a lot about their resolve and what’s inside them as competitors.”

HIGHLIGHTS | If you couldn't catch all the quarterfinal action in our match at No. 2 seed Penn State, we've got you covered!#GoHoos🔶⚔️🔷 | #ALLIN⚽️🔥 pic.twitter.com/AL9BuExsnx

On the long bus ride back to Charlottesville, the Cavaliers watched the UCLA-Northwestern game. Had Northwestern won, Virginia would have hosted its NCAA quarterfinal at Klöckner Stadium. Alas, UCLA prevailed 2-0, and so UVA is headed to the West Coast this week.

The Bruins (20-2), one of the tournament’s No. 1 seeds, will host the Hoos on Saturday at 9 p.m. Eastern, with the winner advancing to the College Cup in Cary, N.C.

Pleasant weather awaits the Cavaliers. Highs in the 70s are predicted for Los Angeles this weekend.

“We won’t have the situation we had [at Penn State], that’s for sure,” Swanson said.

Snow fell during Virginia’s second-round win over Xavier on Friday afternoon, and temperatures plunged on Sunday. That game started at 5 p.m.

“We are so excited to get back to little Charlottesville,” Hopkins said with a laugh before boarding the team bus Sunday night. “It’s 20 degrees and feels like 8. We can’t feel our toes, can’t feel our fingers, everything is so miserably cold. I never want to live in the snow the rest of my life.” 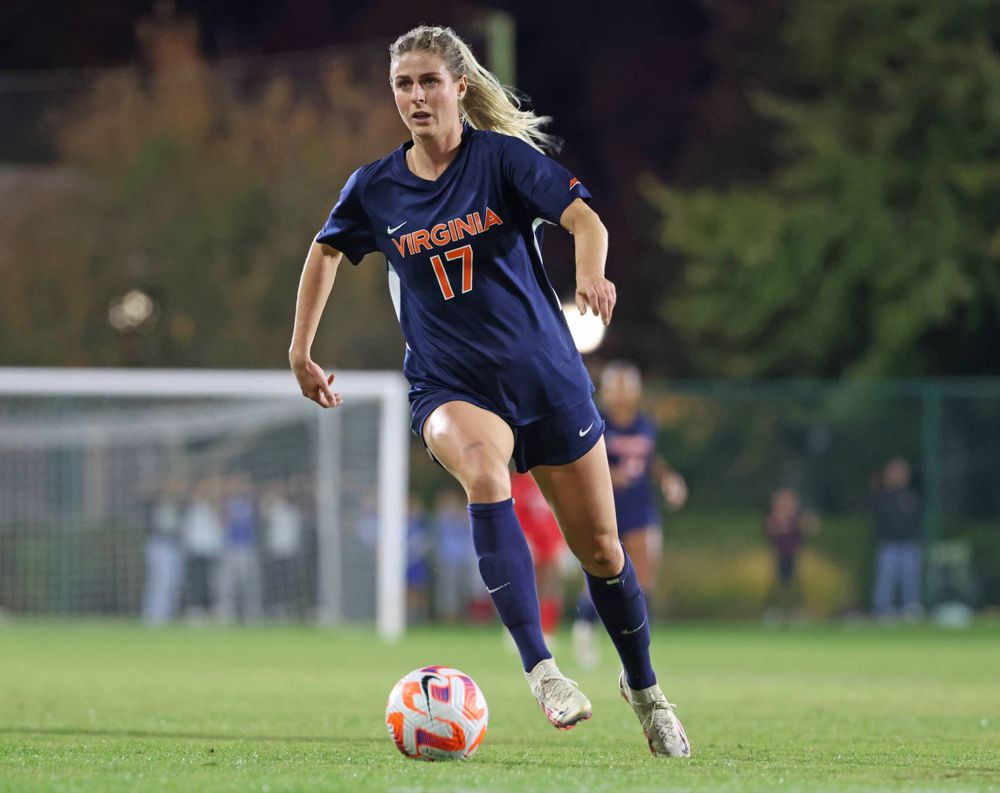 Hopkins, a former Vanderbilt star who’s in her second season with the Cavaliers, is from Southern California, so the quarterfinal will be a homecoming of sorts for her. UVA’s roster includes two other Californians: Ally Reynolds (Los Angeles) and Chloe Japic (Palo Alto).

Playing one more game at Klöckner would have been ideal, Swanson said, but the team’s upcoming road trip “is another challenge, and I think our players accept that. The regular season kind of puts you in a position to either be at home or not, and I think that we didn’t do enough to get ourselves more games at home. We feel bad about that from our fans’ perspective, because our fans have been so good. But we’ve been in this position before, and we’re excited about the challenge that the game presents and the team that we’re playing presents.”

This will be the Cavaliers’ seventh clash with the Bruins in the NCAA tournament. In their most recent meeting, UCLA edged UVA 2-1 in a Sweet Sixteen game in Los Angeles in 2017.

The Bruins are formidable again, but the Hoos showed against Penn State that they have the resolve and grit to overcome significant obstacles. The Cavaliers gave up the game’s first goal in the 30thminute but never stopped believing in themselves.

Freshman Jill Flammia’s unassisted goal in the 74th minute made it 1-1. Less than 10 minutes later, UVA found itself trailing again, but there was no panic.

“It’s one of those things where you have all the confidence in the world in your teammates and in yourself to be able to pull through to the end,” Hopkins said. “We have such a different love and motivation to play for each other and everyone around us, and we want to be good for our teammates. It was just an absolutely incredible game.”

In the first half, Virginia’s defense was solid overall, Swanson said, but “we didn’t attack as well as I would have liked or penetrate as much as we wanted. We talked about that at halftime, and I think there was a real sense of urgency from our team about really going out and trying to penetrate more and trying to get into their box more and get more chance. I think we were able to do that in the second half, and we obviously turned up our pressure as well. I thought that was a difference in the game.” 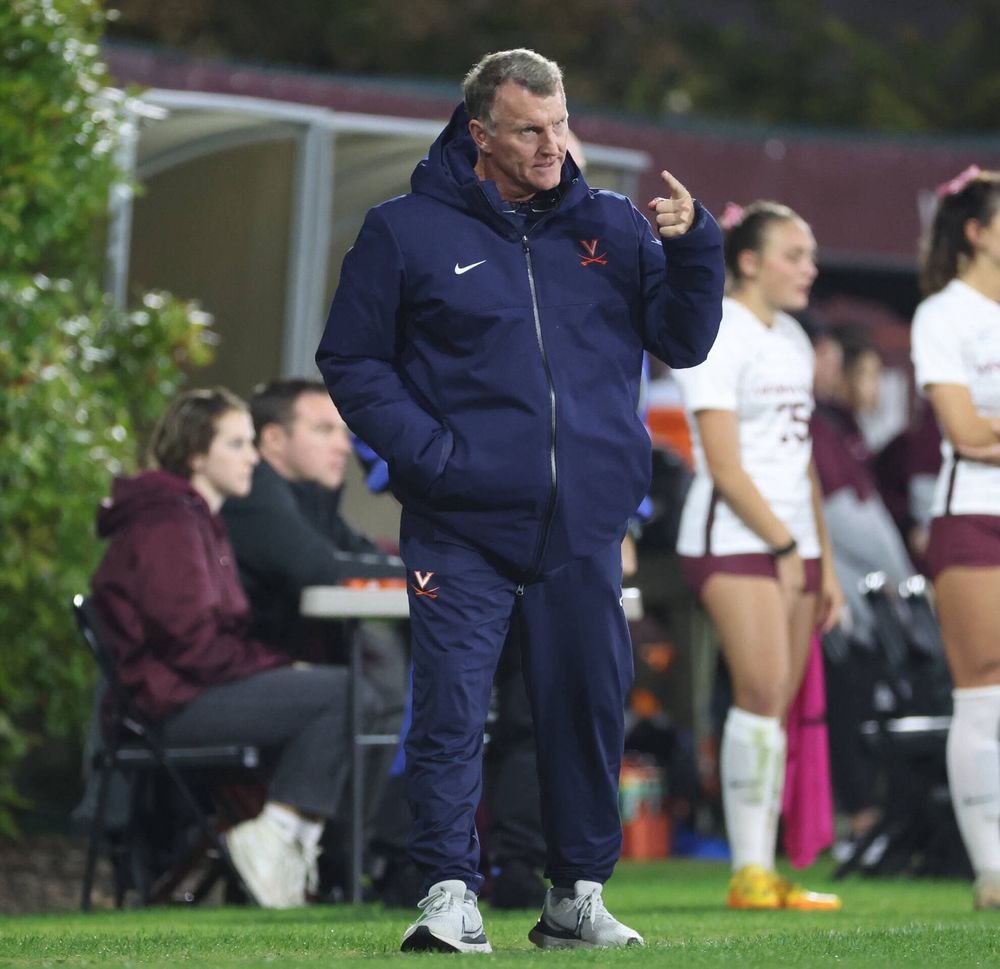 This is Swanson’s 23rd season with the Cavaliers, who have been fixtures in the NCAA tournament during his tenure. This postseason, though, is different. His team is carrying with it the memories of UVA football players Devin Chandler, Lavel Davis Jr. and D’Sean Perry, who were shot and killed Nov. 13 after returning to Grounds from a class field trip to Washington, D.C.

“As a coach, there’s no playbook for something like this,” Swanson said. “There’s no, ‘Hey, this is how you handle it.’ And unfortunately for young women and men on all the teams here, it’s hard to process for everybody. Everybody’s a little different, and I think that was the case on our team. I think like most sports teams at Virginia, they’re close. It’s a close-knit community, and it’s one that supports one another. So it’s been difficult to see one program, like football, suffer and be in pain. I think everybody’s in pain. You never want to forget these young men, and we won’t, but I think sports can be a healer as well, and I think you try to honor their legacy by doing it the way they would do it if they were here.”

The games UVA has played since the shooting have allowed his players to put aside their grief for a few hours to “do what they enjoy and they love doing,” Swanson said. “They could kind of get lost in the time together out on the field, and I think that was therapeutic for them in many times.”

The Cavaliers “have so much to play for,” Hopkins said, “everything that’s bigger than ourselves. I think that we’re really taking everything that’s happened within the Charlottesville/UVA community to heart.”

Virginia’s Season Ends With 2-1 Overtime Loss At No. 1 Seed UCLA

Hoos Set For NCAA Quarterfinal At No. 1 Seed UCLA