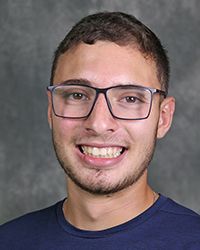 2021-22
• Second-team All-MASC selection
• Made his delayed collegiate debut playing at the No. 3 position at Navy (11/10), winning in four games
• Picked up a four-game victory at No. 3 Princeton against Karim Elbarbary (11/20)
• Compiled an overall record of 12-6 for the Cavaliers
• Tallied 10 wins over ranked opponents
• Secured the winning point for the Cavaliers at the MASC Championships with a five-game victory over Drexel’s Fritof Jacobsson
• Recorded two three-game victories at the CSA Team Championships against No. 3 Trinity and No. 8 Drexel
• Advanced to the semifinal of the Molloy Cup (CSA B-Draw)
• Recorded victories over Will Curtis (Trinity) and James Bell (Dartmouth) in the Molloy Cup