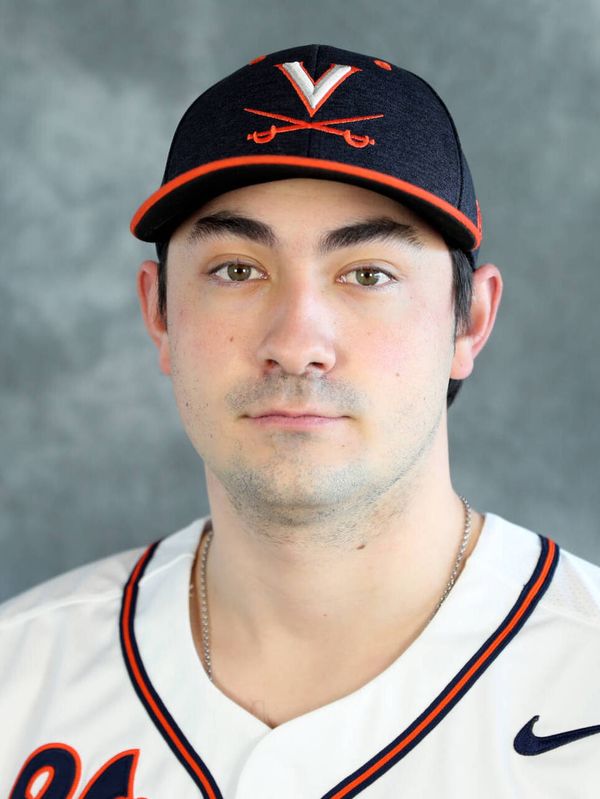 2021
• One of 10 finalists for the NCBWA Stopper of the Year Award, only the third UVA pitcher ever to be a finalist (Kevin Arico – 2009 & Brandon Kline 2011)
• Named a Second Team All-American by the National Collegiate Baseball Writers Association (NCBWA)
• Earned First Team All-Atlantic Region honors as a relief pitcher
• Went 3-0 with a 0.71 ERA and 54 strikeouts in 38.0 innings pitched
• Did not surrender a run in his first 18 appearances of the season, a span of 29.1 innings
• Led the Cavalier bullpen with six holds and finished seven games for UVA in 2021
• Allowed only three runs on the season, he did not allow an earned run in 23 of his 25 appearances
• Inherited 23 runners and only six came around score
• Helped preserve shutouts against Richmond (March 9) and Miami (March 27)
• Struck out a season-best five batters against VCU on May 4 in two innings pitched
• Recorded four-strikeout efforts four times including three against ACC opponents
• Logged a season-high 3.1 innings against Pittsburgh on March 20 and didn’t allow a run while striking out four
• Credited with wins against VMI (2/23), Clemson (4/11) and Wake Forest (May 15)

2020
• Posted a 3-0 record after appearing in six games, all out of the bullpen
• His three wins – Bucknell (Feb. 23), Richmond (March 3), NC State (March 6) – were tied for the most on the team
• Pitched 1.2 innings against then-No. 7 NC State, allowed one run and matched a career-high with three strikeouts
• Tossed a season-high two innings, didn’t allow a run and struck out one in season finale against UMass-Lowell (March 11)

2019
• Appeared in 12 games (11 in relief) in his first season with the Cavaliers
• Earned his first win after tossing three shutout innings of relief against Wagner on March 6
• Did not allow a run in four ACC appearances (five innings) and struck out five batters
• Made one start, pitching the first two innings in a 5-1 win over Richmond on March 27

PRIOR TO VIRGINIA
• Played his freshman season at Kellogg Community College (Mich.)
• Named the Western Conference Freshman of the Year
• Earned All-Michigan Community College Athletic Association, First Team All-Western Conference and Western Conference All-Freshman team Accolades
• Also recognized for work in the classroom by collecting NJCAA All-Academic Third Team, Academic All-MCCAA and Academic All-Conference honors in 2018
• In his lone season for the Bruins, went 5-2 with a 2.87 ERA. Struck out 93 batters in 53.1 innings pitched.
• Kellogg went 45-8 and won the MCCAA State Championship for the second-straight season.

Bales Named a Finalist for NCBWA Stopper of the Year Award