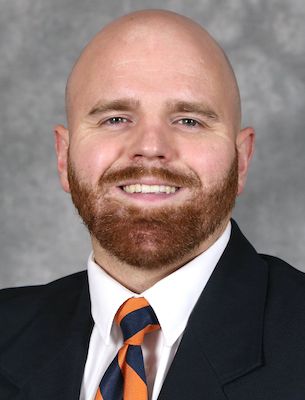 Coy DeWeese enters his first season as a graduate assistant at Virginia.

He spent the previous three seasons as an assistant at his alma mater, Carson- Newman University. He worked as a defensive ends coach his first two years before transitioning to the whole defensive line following Dan Redding’s retirement. DeWeese played four years at Carson-Newman University, three of those years was under the leadership of the legendary Ken Sparks and one year under Mike Turner.

In his first year at C-N as a coach in 2019, DeWeese mentored Trayzel Jureidini-Wyche, Wycleff Phanor and Nick Owens. Jureidini-Wyche earned National Player of the Week honor following a 5.5-sack performance in the Eagles’ regular season finale against Tusculum.

Prior to joining the staff at Carson-Newman , DeWeese coached defensive line at Limestone College in Gaffney, South Carolina.

He received his diploma from Carson-Newman University with a Bachelors of Science in Exercise Science in 2018. After graduating, DeWeese worked youth camps while also being the Director of Strength and Conditioning at Spectrum Sports Academy in Roanoke, Virginia.