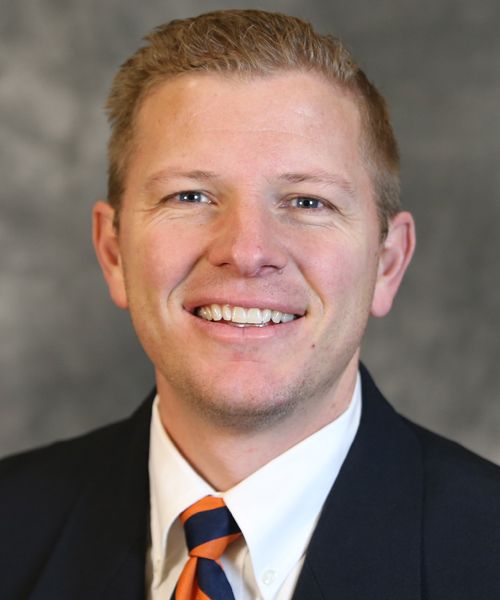 Jason Beck enters his sixth season at Virginia on Bronco Mendenhall’s staff and is the quarterbacks coach.

Since the arrival of Mendenhall and company in Charlottesville in 2016, UVA’s offensive production has soared. In the previous 126 season of Virginia football before Beck started working with quarterbacks, UVA never had a 3,000-yard passer and only once had a quarterback that amassed 3,000+ yards of total offense in a season. In Beck’s first four seasons as Virginia’s quarterbacks coach, the Cavaliers have had two 3,000-yard passers and the UVA single-season record for total offense has been broken three times. With the unique nature of the COVID-19 pandemic, the 2020 season only saw UVA play 10 games, but the passing yards per game (260.6) was the second-best output in Beck’s UVA tenure. Also, you can find Beck’s quarterbacks all over the UVA single-game passing and single-game total offense record book, as six of the top nine outputs in single-game passing and the top six outings in single-game total offense have come since Beck started at Virginia.

Beck and UVA offensive coordinator Robert Anae have worked together for the past eight seasons and quarterbacks have thrived under the pairing. Between 2013 and 2020, quarterbacks under Anae and Beck have averaged 3,200 passing yards and 524 rushing yards a season for an average of 3,725 yards of total offense.

Prior to Armstrong, Beck guided Bryce Perkins’ electric career at UVA. Perkins graduated as the program’s career record holder for total offense (7,910) after playing only two seasons in Charlottesville (2018-19). Under Beck, Perkins also owns the top two spots in the Cavalier record book for single-season and single-game total offense. His program record for single-season total offense (4,307) in 2019 ranked No. 6 nationally and No. 1 in the ACC. Perkins also set the single-season passing record at UVA with 3,538 passing yards in 2019, which ranked No. 16 in the nation and No. 3 in the ACC. Perkins was a special quarterback for the Cavaliers as he and Oklahoma’s Jalen Hurts were the only players in the nation in 2019 with 3,000+ passing yards and 700+ rushing yards. In 2018, Perkins and 2018 Heisman Trophy winner Kyler Murray (Oklahoma) were the only two players in the nation with 2,600+ passing yards and 900+ rushing yards. Perkins was the only college player between 2018-19 to accumulate 6,000+ passing yards and 1,500+ rushing yards. Perkins also left UVA the program’s all-time leader in career rushing by a quarterback (1,692) and games of 100+ rushing yards by a quarterback (7).

Under Beck’s watchful eye, UVA quarterback Kurt Benkert had a record-breaking season in 2017. The UVA senior quarterback became the first player in program history to throw for over 3,000 yards in a season. Benkert finished the season with 3,207 passing yards and a single-season program record 298 completions, both marks were passed by Perkins in 2019. Benkert’s 25 passing touchdowns in 2017 rank No. 2 all-time at UVA for a season. He also set the UVA single-season standard for total offense with 3,144 total yards. The 2017 UConn game saw Benkert break his own single-game passing and single-game total offense records he set in 2016. Against the Huskies he amassed 455 passing yards and 465 total offense yards. In 2019 Perkins passed Benkert’s total offense record twice.

Beck saw Benkert finish his two-year UVA career with 5,759 career passing yards and 46 career touchdowns, both numbers rank No. 3 all-time in the UVA annals. In 2016 and 2017 Benkert became the fastest quarterback in a season to reach 1,000 and 2,000 yards of passing, doing so in four and eight games, respectively. A UVA quarterback has only passed for 400 yards three times in a game and Benkert did it twice.

Beck, a former Cougar quarterback and offensive intern on Mendenhall’s BYU coaching staff, returned to Provo in 2013 with six years of coaching experience, including stints at LSU, Weber State and Simon Fraser.

Beck helped true freshman Tanner Mangum break all BYU freshman QB marks in 2015 after taking over for injured Heisman hopeful Taysom Hill in the season opener. Mangum earned 2015 Freshman of the Year honors from the Touchdown Club of Columbus (Ohio) after he was the only freshman to finish the regular season with more than 3,000 passing yards and a 60 percent completion percentage.

In 2014, Beck helped BYU successfully navigate a season-ending injury to Hill in the season’s fifth game as Hill and Christian Stewart combined to total 3,623 yards and 32 touchdowns on the year, including 25 TDs by Stewart. As a sophomore quarterback in 2013, Hill passed for 2,938 yards and 19 TDs while also rushing for 1,344 yards and 10 TDs under Beck’s tutelage.

In 2012, Beck was hired as the offensive coordinator at Simon Fraser located in Burnaby, British Columbia, Canada. SFU is the first and only member of the NCAA located outside of the United States. Beck turned an offense that ranked last in the Great Northwest Athletic Conference in total offense, passing offense and scoring offense in 2011 into the league’s No. 1-rated attack in all three categories during the program’s first year as a full NCAA Division II member in 2012. The team nearly doubled its total touchdowns scored, going from 28 to 52, and more than tripled its passing TDs, jumping from nine to 28.

Players also thrived individually as SFU quarterback Trey Wheeler ranked No. 14 in Div. II in passing yards per game at 297.1 yards per game while receiver Lemar Durant ranked No. 4 in receiving yards per game (119.8), No. 7 in receptions per game (8.27) and No. 18 in scoring (9.27 ppg). Durant received first-team all-conference, conference newcomer of the year, and All-America Second Team recognition with 82 catches for 1,227 yards and 16 TDs.

As a player at BYU, Beck served as the backup to All-American quarterback John Beck from 2004-2006, including a redshirt year due to an injury suffered his junior season. He totaled 553 passing yards and 28 rushing yards, including 305 yards on 20-of-28 passing in his lone start in a 38-0 victory over Utah State his senior season.

Beck transferred to BYU from College of the Canyons in Santa Clarita, Calif., where he led the COC Cougars to an 11-1 season and Western States Conference Northern Division title as a sophomore. A unanimous first-team All-Western States Conference pick, he led COC to a No. 1 ranking in California and No. 4 national JC ranking, throwing for 2,052 yards while completing 77.5 percent of his passes. He also added 430 rushing yards. Current UVA offensive line coach Garett Tujague was the COC offensive line coach during Beck’s year in Santa Clarita.

A Junior College Academic All-American, Beck spent his freshman season at Ventura College after prepping at Hueneme High School in his hometown of Oxnard, Calif.  Before starting college, he served a two-year mission for The Church of Jesus Christ of Latter-day Saints in Denver, Colo., from 1999-2001.

Beck earned bachelor’s and master’s degrees in communications from BYU in 2006 and 2011. He is married to former BYU soccer standout Jaime Rendich, and they have a daughter, Peyton, and twin sons, Cameron and Jackson. Jaime was a four-year starter and All-American midfielder/forward during her BYU career from 2002-05.