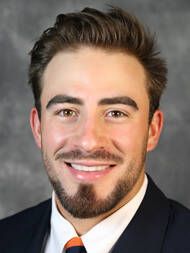 Joe Spaziani joined the Virginia staff as a graduate assistant in January 2020. After working for two seasons with the offensive line, he now works primarily with the quarterbacks.

Spaziani returned to his alma mater after spending the 2019 season as a long snapper in the CFL with the Toronto Argonauts. The Hingham, Mass., native began his career as a quarterback for the Cavaliers before appearing in 30 career games as a long snapper. He made three career tackles on punt coverages and forced one fumble. He appeared in the the Military Bowl and the Belk Bowl for the Cavaliers.