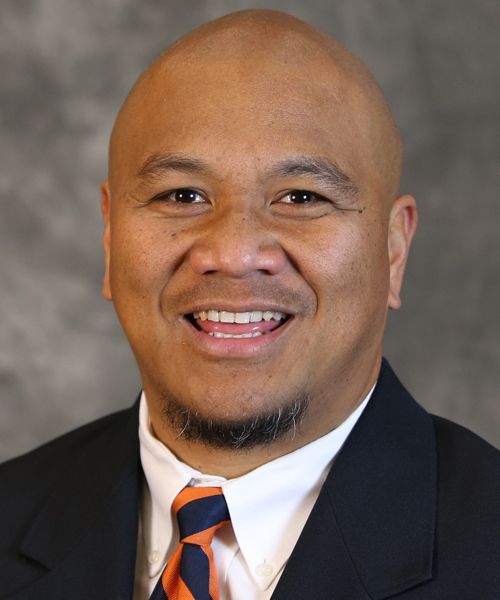 Mark Atuaia is in his sixth season at Virginia on Bronco Mendenhall’s staff and is the running backs coach.

Atuaia (Ah-too-why-ah) has been instrumental in the development of running back Wayne Taulapapa, who is on the verge of surpassing the 1,000-yard mark in his career entering the 2021 campaign. He enters the season with 868 yards . In 2019, Taulapapa rushed for 12 touchdowns, the most by a Cavaliers since Keith Payne’s 14 in 2010. Taulapapa had four games with multiple rushing touchdowns, highlighted by three in the win over Florida State, including the game-winning score.

Atuaia guided Jordan Ellis to a stellar senior season in 2018, rushing for 1,026 yards and 10 touchdowns, becoming just the third 1,000-yard rusher at UVA since 2004. Ellis was UVA’s first 1,000-yard rusher since 2013 and 15th overall. Ellis went on to appear in the East-West Shrine All-Star Game and sign a free agent contract with the Cincinnati Bengals.

Atuaia helped All-ACC running back Taquan Mizzell take a big step as a senior in 2016 as the tailback became the first player in ACC history with at least 1,500 career rushing and 1,500 career receiving yards. Under Atuaia’s watchful eye, Mizzell developed into one of the nation’s most durable backs, and was one of four players in the nation in 2016 to led his team in rushing (940) and receptions (52).

Atuaia has been with Mendenhall since 2013 when he joined the BYU staff as the running backs coach. In 2013 BYU’s run game ranked No. 10 in the nation averaging 267.3 yards per game, setting a school record with 3,475 rushing yards. He tutored Jamaal Williams as the Cougar rushed for 1,233 yards and seven touchdowns in 2013 as a sophomore. Atuaia assisted in BYU’s offense ranking No. 14 in scoring offensive in 2014 as BYU put up 37.1 points per game, the most points by a BYU team since 2001. In 2015 the BYU offense ranked No. 4 in the nation in red zone offense, scoring at a 94.3 percent clip.

Atuaia mentored Paul Lasike, a former BYU rugby All-American from Auckland, New Zealand. Under Atuaia’s tutelage, the big running back played football for the first time ever in his life and after three seasons at BYU Lasike signed with the Chicago Bears in 2015.

Atuaia has a history of working with big, strong and powerful running backs. As a student assistant at BYU from 2005-11, Atuaia was instrumental in the development of former NFL running backs Fahu Tahi, Fui Vakapuna, Harvey Unga and Manase Tonga during their time at BYU.

A former running back at BYU during the 1991 and 1994-96 seasons, Atuaia first joined the BYU athletic department in June 2012 as the assistant to the athletics director for student services. He previously worked as the assistant to the dean of Student Life at BYU. He accepted that position after graduating in 2011 with both a doctor of jurisprudence from BYU’s J. Reuben Clark Law School and a master of public administration from the George W. Romney Institute of Public Management at BYU’s Marriott School of Management.

During Atuaia’s four-year playing career, BYU achieved a 39-11-2 record, won three conference titles and was ranked in the final top-25 national rankings three times. In addition, the offense was ranked in the top 10 nationally during three of his four seasons.

Atuaia totaled 1,247 yards on 301 carries (4.1 yards per attempt) with 11 touchdowns during his college career, while adding 68 catches for 668 yards (9.8 yards per catch) and four scoring receptions. His career-long rush was 51 yards while his long reception went for 61 yards. Atuaia also added 113 return yards as a member of the kick return team his freshman and sophomore seasons.

A native of Laie, Hawaii, Atuaia prepped at Kahuku High School before attending BYU. He served as a missionary for The Church of Jesus Christ of Latter-day Saints in Tucson, Ariz., from 1992-93. He received his bachelor’s degree from BYU-Hawaii in 2003.