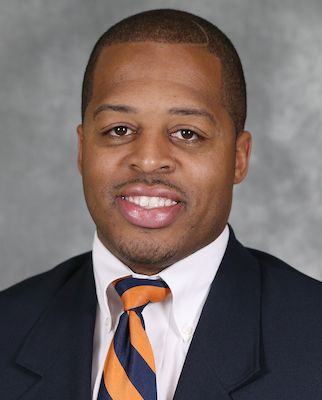 The 2022 season will be Marques Hagans 11th year at Virginia. In addition to coaching the wide receivers, he also serves as the associate head coach, duties he assumed under Tony Elliott at the start of 2022. During his time at UVA, he has done an incredible job of developing the Cavalier wide receivers with record-breaking performances over multiple years.

Of the 15 wide receivers on UVA’s top-20 career receptions list, nine have been coached by Hagans. That group is topped by current Atlanta Falcons’ wideout Olamide Zaccheaus, who pulled down 250 catches for the Cavalier from 2015 to 2018.

Hagans was an influential force in the program’s community involvement. In 2022, Hagans was named a UVA recipient of the Atlantic Coast Conference’s UNITE Award. The award was created to honor individuals affiliated with the league who promote and encourage racial equity and social justice through education, partnerships, engagement and advocacy. Recipients helped create meaningful, lasting change by improving systems, organizational structures, policies, practices and attitudes or have been pioneers and/or helped pave the way for minorities either at the institution or in the community.

Hagans helped to start the UVA Groundskeepers program in 2020. The group was created after the racial and social justice movements of 2020 with an aim to bring unity to Grounds and the greater Charlottesville community.

Additionally, Hagans has helped pave the way for BIPOC (Black, Indigenous, and people of color) in the community through his engagement with the Prolyfyck Run Crew. During the summer of social unrest, a group of men in the Charlottesville community decided to create a space for people of color to feel safe running. They chose a route that specifically went through predominantly Black communities to claim a space for a Black-led running group. Hagans was an early member of the group’s runs and helped spread its message and increase participation in Prolyfyck among community members.

During the 2022 season, junior Lavel Davis Jr., coming off a knee surgery that required him to miss the 2021 season, led the nation in average yards per reception with a 23.9 yard per catch average. Davis was one of three UVA players killed last November when returning from a school field trip. He played in eight games and had 371 receiving yards on 16 catches.

Also in 2022, wide receiver Keytaon Thompson received third-team All-ACC honors after ranking 12th in the country in receptions per game (6.6) and 53rd in receiving yards per game (72.4) in a season shortened by injury

Hagans 2021 receiving corps was part of a magical season at UVA. The Cavaliers averaged 392.6 passing yards per game and Virginia had four wide receivers with more than 600 receiving yards. All-ACC receivers Keytaon Thompson and Dontayvion Wicks led that group. Thompson finished the season with a team-high 78 catches for 990 yards while Wicks piled up the most yardage, gaining a school record 1,203 yards on 57 catches, an average of 21.1 yards per reception.

Including tight end Jelani Woods, in 2021 Virginia was the only school in the country to have five wide receivers with 500 or more receiving yards.

Under Hagans’ watchful eye in 2017, UVA saw its first receiving trio to amass at least 600 receiving yards in the same season as Zaccheaus (895), Andre Levrone (689) and Doni Dowling (647) accomplished the feat. Dowling (136), Levrone (127) and Zaccheaus (122) also became the first Cavalier trio to amass 100+ receiving yards in the same game when they did so against UConn in 2017. It was only the sixth time such a feat happened in the ACC since 2000. Also in 2017, Zaccheaus set the UVA single-season record for receptions in a season with 85, while his 895 yards in 2017 rank No. 5 all-time on UVA’s single-season ledger. Dowling, Levrone and Zaccheaus all reached 1,000 career receiving yards in 2017, giving Hagans seven wide receivers he has coached at UVA that have reached the mark.

Wide receiver Canaan Severin thrived under Hagans earning second-team All-ACC honors in 2015 after finishing the regular season ranked No. 3 in the ACC with 759 receiving yards. Severin’s 759 receiving yards also ranks No. 15 all-time in the UVA record book for a season. Severin caught 54 passes and eight touchdowns. The 54 receptions tie him with Herman Moore (1990) for No. 11 all-time in the UVA annals for catches in a season. In 2015 Severin became the 20th player in program history with 100 receptions and finished his career No. 19 all-time with 102 catches, 96 of which came over the 2014 and 2015 seasons. Severin finished his career with 1,383 receiving yards, which ranks No. 15 all-time in the UVA record book.

Severin’s rise began in 2014 under Hagans. As a junior Severin led UVA with 42 catches for 578 yards and five touchdowns after entering the season with six career receptions.

Hagans oversaw the emergence of Johnson in 2013, then a true freshman. Despite not playing the first four games of a potential redshirt season, Johnson completed one of the best true freshman seasons in recent UVA history, catching 20 passes for 282 yards and a score in the final eight games of the season.

The St. Louis Rams selected Hagans in the fifth round (144 overall) of the 2006 NFL Draft. He spent three seasons with the Rams before being picked up by the Kansas City Chiefs for the 2009 campaign. Hagans finished the 2009 season with the Washington Redskins and was released in the summer of 2010 after injuring himself in off-season workouts.

Hagans spent the 2011 and 2012 seasons at UVA as a graduate assistant, working with the offense.

Hagans is a native of Hampton, Va., and graduated from Hampton High School after spending two years at neighboring Bethel High School. As a junior at Hampton, Hagans led the Crabbers to the state championship in Group AAA, Division 5 of the Virginia High School League in 1998. Hampton advanced to the state semifinals in Hagans’ senior season in 1999.

Hagans graduated with a degree in anthropology from UVA in 2005 and is currently finishing a graduate degree in professional studies.