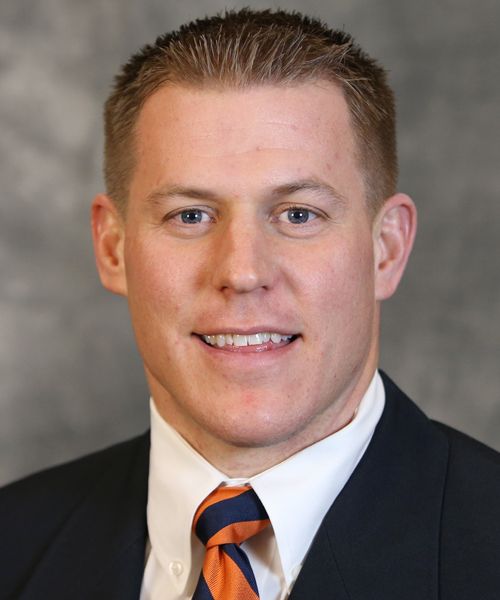 Nick Howell is in his sixth season at Virginia on Bronco Mendenhall’s staff and is the defensive coordinator/secondary coach.

Despite losing multiple starters on the defensive side of the ball for the season, UVA broke the program record for sacks in a season in 2019. The Chris Long-led defense in 2007 set the standard with 43, and the 2019 edition concluded the year with 46, which ranked No. 6 in the nation. Inside linebacker Jordan Mack led all ACC linebackers with 7.5 sacks. In all, 27 of UVA’s 46 sacks were recorded by linebackers. Howell’s defense accomplished this all despite having lost five starters and various role players to season-ending injuries by the time UVA kicked off in the Orange Bowl.

“Havoc Hoos” is the mantra of the UVA defense and they terrorized opponents’ all season, but the six sacks against Virginia Tech to clinch the ACC Costal championship and Commonwealth Cup were probably the most clutch. Leading 33-30 with 1:23 left to play, UVA sacked Virginia Tech three-straight times, including a strip sack in the end zone by Mandy Alonso and touchdown recover by Eli Hanback to seal UVA’s first-ever appearance in the ACC Championship game. Howell’s defense was No. 1 in the ACC and No. 12 in the nation in 2019 with three defensive touchdowns.

Howell’s defense shined in 2018, finishing No. 12 in the nation in team passing efficiency defense (107.62), No. 16 in passing yards allowed (183.0), No. 20 in the nation in team defense (330.5) and No. 20 in scoring defense (20.1). UVA’s 28-0 drubbing of South Carolina in the 2018 Belk Bowl was the first time an SEC team was shutout in a bowl by a non-SEC team since the 1975 Gator Bowl. Bryce Hall finished No. 1 in the nation with 22 pass breakups and 24 passes defended, earning All-America honors from five different outlets highlighted by Walter Camp and Football Writers Association of America. Safety Juan Thornhill also earned All-America honors, appeared in the Senior Bowl and led all ACC safeties in lowest passer rating when in coverage. Both Hall and Thornhill earned first-team All-ACC honors. Thornhill became the second round pick of the Kansas City Chiefs in the 2019 NFL Draft, while cornerback Tim Harris was the  sixth round selection of the San Francisco 49ers.

In Howell’s second season in Charlottesville in 2017 he oversaw a secondary that boasted a corps that ranked No. 7 in the nation and No. 2 in the ACC against the pass (165.8). The group was headed by three-time first-team All-ACC player Quin Blanding, ACC Defensive Rookie of the Year Brenton Nelson and third-team All-ACC cornerback Thornhill. Blanding finished his illustrious career with more All-America honors and as UVA’s all-time record holder with 495 career tackles. The 495 career tackles rank tied for No. 6 all-time in ACC history and are the most by any ACC defensive back. Blanding finished each of his four seasons No. 2 in the ACC in tackles, a feat that hadn’t even been done three times in the leauge until he did it after his junior year. In his duties overseeing the defense, inside linebacker Micah Kiser was named the Campbell Trophy winner (Academic Heisman) and led the ACC in tackles for the third year in a row. Only Boston College’s Luke Kuechly (2009-11) had previously accomplished the feat in league history. Kiser was also a three-time first-team All-ACC honoree and received multiple All-America honors over the past two seasons.

Howell served on Mendenhall’s BYU staff in several roles from 2007-15, most recently as the defensive coordinator and secondary coach. Howell first came to BYU in 2007 as a defensive intern. From 2008-09 Howell was a defensive graduate assistant. Howell’s first full-time position on Mendenhall’s staff came in 2010 as the outside linebacker coach and from 2011-12 he was the secondary coach and a special teams coach.

Howell helped the defensive unit at BYU finish the 2015 regular season ranked No. 6 nationally in sacks per game and No. 15 in tackles for loss after the Cougars ranked No. 20 in rushing defense in 2014.

Despite having to defend more plays than all but four teams nationally in 2013 due to BYU’s up-tempo offensive system, the Cougar defense ranked No. 12 nationally in yards-per-play defense, No. 16 in pass efficiency defense and No. 22 in scoring defense. Howell helped the BYU defense rank No. 3 in total defense (266.1 yards allowed) and No. 10 in passing yards allowed (179.2 yards per game) in 2012.

In 2011, Howell helped the defense rank No. 15 in pass efficiency defense, allowing a rating of 112.58. In that same year, the Cougars ranked No. 13 in overall defense.

Howell first came to BYU in 2007 as a defensive intern and then served two years as a graduate assistant before being hired as an assistant coach in 2010. Since first being hired at BYU by Mendenhall in 2007, he has helped coach defensive backs and linebackers. Howell started as a full-time coach working as the team’s outside linebackers coach before taking over the BYU secondary partway through the 2010 season.

A native of Ogden, Utah, Howell earned a M.A. in education with teaching certification from the University of Phoenix in 2007 after receiving his undergraduate degree in history from Weber State in 2005. Howell and his wife Brooke have four children.

Howell’s contributions at BYU helped the Cougars put one of the nation’s top defenses on the field each year he was in Provo. In 2013, Howell was a candidate for the Broyles Award, given annually to the nation’s top assistant coach.