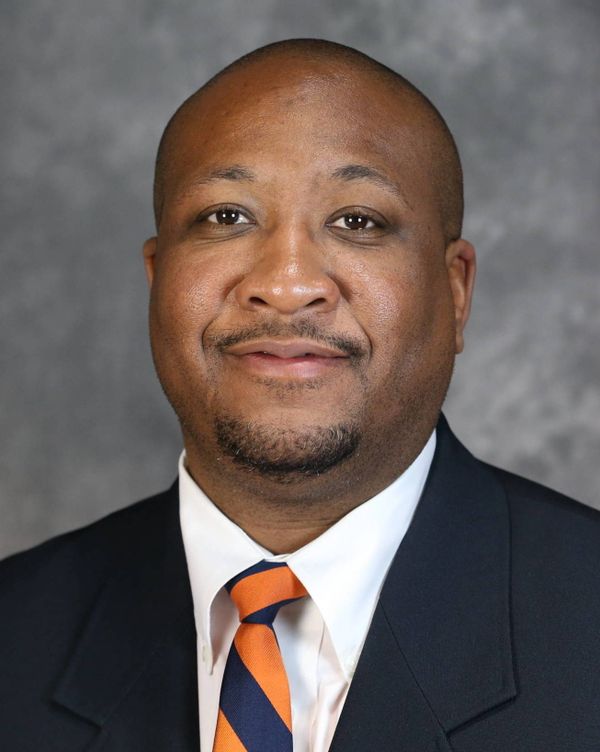 Ricky Brumfield is in his fourth season at Virginia after joining Bronco Mendenhall’s staff in January of 2018 as the program’s special teams coordinator.  In February of 2021, Mendenhall announced Brumfield would also serve as the cornerbacks coach after serving as the tight ends coach for the 2020 season.

Brumfield, who enters his 21st season as a collegiate coach in 2021, has consistently overseen record-breaking performances at the FBS, FCS and DII levels, while also boasting pupils that have have been named semifinalists for coveted honors like the Lou Groza Award and the Ray Guy Award. The 2019 season was the most recent season serving of record-breaking performances as the Cavaliers won the ACC Coastal Division title and made their first appearance in the Orange Bowl.

Brumfield comes to UVA after spending the 2016 and 2017 seasons at the University of Texas at San Antonio where he was the Roadrunners’ special teams coordinator and coached the team’s tight ends.

UTSA punter Yannis Routsas was a semifinalist for the 2017 Ray Guy Award presented to the nation’s top punter. UTSA was one of just three schools in 2017 to have both its placekicker and punter as semifinalists for those two national awards.

During the 2017 season, the Roadrunners went 6-5 with four of those losses coming by a total of 17 points. In the current NCAA FBS football statistics, UTSA ranks No. 6 in the nation in punt return defense. This season the Roadrunners allowed just eight punt returns for a total of 23 yards (2.88 ypr.). UTSA was No. 39 in the nation in kickoff defense by allowing 19.61 yards per return.

His Roadrunner special teams forced five fumbles during the 2016 season and two in 2017.

Brumfield came to UTSA from Western Kentucky, where he spent three seasons as special teams coordinator and cornerbacks coach. He helped the Hilltoppers to a combined 28 victories, including a pair of bowl wins, during his tenure.

In 2015, WKU won the Conference USA title and capped off a 12-2 season with a 45-35 victory against USF in the Miami Beach Bowl, while finishing the season with a No. 24 final ranking. Garrett Schwettman, the school’s career record holder for points, extra points and field goals, earned first-team all-conference honors, while kick returner Kylen Towner made the second team and cornerback Prince Charles Iworah and long snapper Nolan Dowling were named honorable mention.

In his first two seasons with the Hilltoppers, the defense and special teams were among the conference’s best in nearly every major statistical category. He tutored five all-conference performers, including cornerbacks Wonderful Terry and Cam Thomas, who played for the NFL’s Buffalo Bills in 2015.

In 2013, WKU led the Sun Belt Conference and finished 14th nationally in total defense, while also leading the league in interceptions (14), team pass efficiency defense and fewest passing yards allowed. Additionally, his kick and punt coverage units were tops in the conference.

Brumfield was the special teams coordinator and safeties coach at Nicholls State, in 2011-12. His impact on the Colonels’ special teams was felt immediately, as they blocked six kicks and ranked 14th in the Football Championship Subdivision in kick return average, while punter Cory Kemps finished sixth nationally with a 42.8 average in 2011.

Brumfield and Justin Anderson, UVA’s director of player personnel, were both assistant coaches at Nichols State during the 2011 and 2012 seasons.

The New Orleans native got his coaching start in 2001 at Union College, where he oversaw special teams and wide receivers for three seasons.

Brumfield served as special teams coordinator and wide receivers coach at Fairmont State in 2004-10. He helped the Fighting Falcons rank among the nation’s best in special teams categories by the end of his tenure, including the third-best kick return average in 2009.

In his final season with the Fighting Falcons, his special teams units blocked five kicks, forced two turnovers and had a pair of touchdowns. Three of his players earned all-conference accolades, including kick returner Zack Page, who set Division II career records for kick returns, kick return yardage and combined return yards. One of his receivers, Perry Baker, was one of a handful non-Division I players to be selected to play in the 2010 East-West Shrine Game. Baker went on to become of the premier rugby players in the world. Baker is an Olympian for the USA Sevens team and was a two-time World Rugby MVP (2017 and 2018).

During his time at Fairmont State, Brumfield spent five summers assisting with various NFL teams. He tutored wide receivers and special teams with the Pittsburgh Steelers in 2007-09 and also spent time with the Atlanta Falcons, Buffalo Bills and Green Bay Packers.

Brumfield was a four-year letterwinner and two-year starter at wide receiver at Utah State. He helped the Aggies to a pair of Big West Conference Championships and a berth in the 1997 Humanitarian Bowl.

Brumfield earned his bachelor’s degree in sociology from Utah State in 1999 and his master’s degree in secondary education from Union College (Ky.) in 2003.

He and his wife, Erin, have four children, Kyan, McKel, Tacy and Asher.