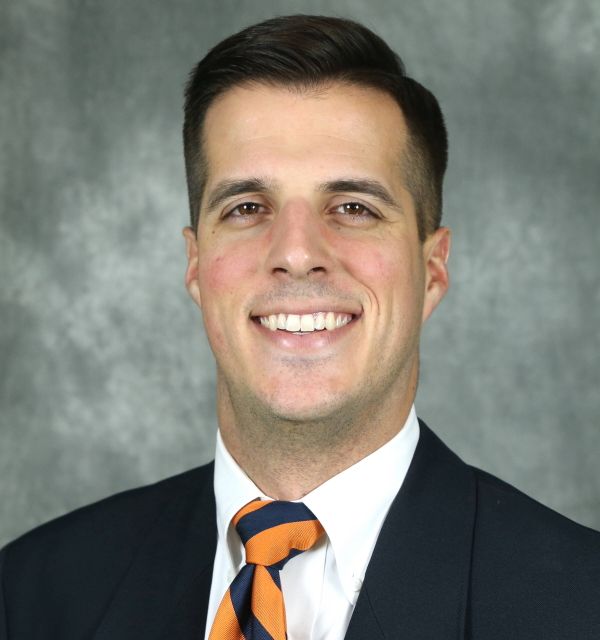 Taylor Lamb joined the Virginia staff in January of 2022 as the Cavaliers’ quarterbacks coach. He spent the 2020 and 2021 seasons at Gardner-Webb where he coached the Bulldogs’ quarterbacks both years and served as the team’s offensive coordinator in 2021. Lamb previously served as a graduate assistant coach at South Carolina working with Gamecocks’ offense for the 2018 and 2019 seasons.

A dual-threat quarterback, Lamb had an exceptional career as the signal caller at Appalachian State. He finished his college career ranked first in Mountaineers’ history with 90 touchdown passes in 51 games (49 starts). He also ranked first in Sun Belt Conference history by the end of his time in Boone.

Lamb passed for nearly 10,000 yards (9,786), rushed for 2,008 yards and accounted for 113 total touchdowns. He finished his time at Appalachian State second to Armanti Edwards in the school’s record books with 11,794 yards of total offense and 36 wins.

As a senior he was named Offensive MVP of the Dollar General Bowl. It was the third of three consecutive bowl wins for Lamb as the Mountaineers’ quarterback.

Lamb was named Sun Belt Conference Freshman of the Year in 2014 after shattering several freshman passing records. He threw for 2,381 yards and 17 scores that season to start his career.

Lamb graduated from Appalachian State with a degree in physical education in December of 2017.

As a high school senior at Calhoun (Ga.) High, Lamb was named Georgia’s Gatorade Player of the Year and was rated as a three-star prospect by 247Sports.com. A MaxPreps second-team small school All-America selection that season, Lamb passed for 3,498 yards and 26 touchdowns as a senior under his uncle Hal Lamb. While at Gardner-Webb, he served on the staff with his cousin, Tre Lamb, who was the Bulldogs’ head coach.

Lamb’s father, Bobby Lamb, coached at Furman from 1986 to 2010 (the last eight years as head coach) and was the first head coach at Mercer University in 2011. He was named the first coach at Anderson University (S.C.) in 2021 for a program that will field its inaugural team in 2024.

Lamb and his wife, Halie, have a son named Cooper.