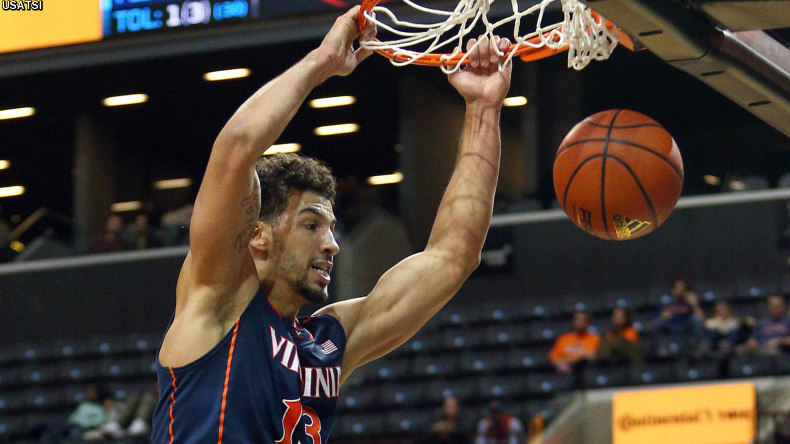 Justin Anderson and Anthony Gill each had 13 points to lead No. 8 Virginia to a 45-26 victory over Rutgers on Saturday night in the Barclays Center Classic championship game.

“We said we (were) going to win with our defense,” Bennett said. “We are going to play defense.”

“We won’t use that,” Rutgers coach Eddie Jordan said when asked if the minutes Kadeem Jack and Myles Mack played in the two games could explain the Scarlet Knights’ inability to score. “We want to make sure that our guys in that locker room don’t use that as an excuse. There’s nothing to be ashamed about.

“We played a good team. They did things that make them a good team and they won.”

Anderson had a two-handed dunk with 3:02 left that essentially sealed the win. Gill, the tournament MVP, added his own emphatic dunk with 1:36 remaining to pushed the lead to 42-26.

Anderson and Gill were named to the all-tournament team, along with Jack, Vanderbilt’s Damian Jones and La Salle’s Jerrell Wright.

The Scarlet Knights led 18-17 at the half as Virginia made just 8 of 28 from the field. Making the offensive outage more troubling was that Virginia opened with an 11-3 run. But from that point until the end of the first half, Virginia missed 13 of its final 16 shots.

“We were really laboring offensively,” Bennett said. “That was obvious. You just say be as great as we can defensively.”

Virginia finished with 32.7 percent shooting from the field.

Rutgers experienced its own offensive breakdown in the second half, scoring eight points in the first 14:40. Following Jack’s layup 4:15 into the second half, Virginia missed its next nine shots from the field until Mike Williams’ twisting laying with 6:20 left.

“They have good players who are willing and determined to be as good as a team,” Jordan said about Virginia. “They’ll defend. I had experience with the New Jersey Nets, not in this building. But we had Kenyon Martin, Jason Kidd, Kerry Kittles and Dikembe (Mutombo), those guys you don’t have a whole lot to say to them. They want to defend. It seems like that’s what they do. They want to defend and they got good size at every position. Good athletes at every position. They got good players and that makes up a good team.”

The Cavaliers led for 35 minutes, 33 seconds.