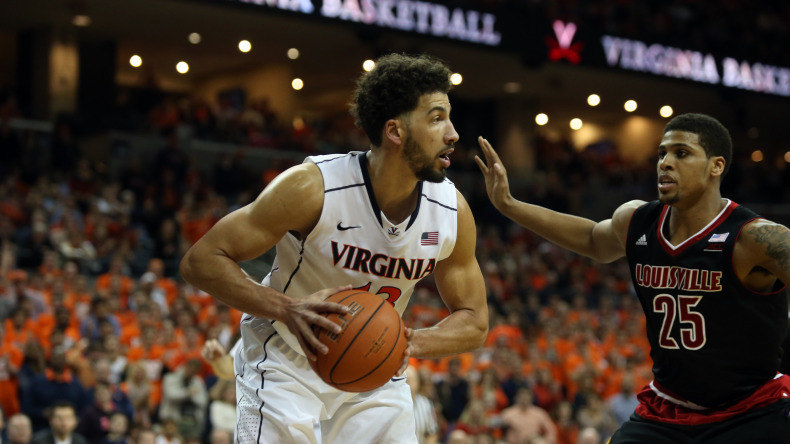 CHARLOTTESVILLE, Va. (AP) Virginia couldn’t have been much better on defense in the first half against No. 9 Louisville.

The way the third-ranked Cavaliers played it in the second half almost cost them the game.

Malcolm Brogdon scored 15 for Virginia, which held the Cardinals scoreless for a stretch of 12 minutes spanning halftime, then had to withstand a furious rally for a 52-47 victory Saturday night that left both head coaches frustrated with their teams.

The Cardinals’ last basket in the first half came with 10:32 remaining, and they were fortunate to only trail 24-13 at intermission. Cavaliers coach Tony Bennett acknowledged that the half was about as close to perfect a team can play.

”The second half, it wasn’t there,” Bennett said.

Louisville had a lot to do with that, said coach Rick Pitino.

”We worked really hard (for) three days at a way to beat their defense and then ignored it in the first half,” he said.

In the second half, the Cardinals clawed their way back, ultimately making a huge push in the final minute.

Terry Rozier scored 16 points, Montrezl Harrell had 12 and Chris Jones 11 for the Cardinals (19-4, 7-3 Atlantic Coast Conference). But only one other player scored and they had a four-game winning streak snapped. Louisville got within 50-47 on Jones’ basket with 18 seconds left, but he missed a free throw and Brogdon converted a pair at the other end and the Cavaliers held on.

Anthony Gill added 10 points and eight rebounds for the Cavaliers, who played the second half without scoring leader and defensive stopper Justin Anderson with an injury to his left hand. Anderson emerged from halftime with his hand wrapped, sat with the trainer at the end of the bench and Bennett suggested later he could be out for a while.

”I’m sure there’s going to have to be something done,” Bennett said.

The Cavaliers, however, refused to use Anderson’s absence as an excuse for almost letting the game get away.

”I think it pushed us forward if anything,” said Gill. ”We understand that such a great player, such a great leader on our team just went out and that means we all have to step up as a unit. Nobody can let down.”

The Cavaliers (21-1, 9-1) were playing their third game in a row against a ranked team with a Hall of Fame coach, and for a time it looked like it might be lopsided, especially after Louisville’s long scoring drought.

”Their defense is awesome. I won’t take anything away from them, but our offense was ridiculous,” Pitino said.

With tension mounting for Virginia, Darion Atkins scored on a hook shot in the lane with 1:04 left. After Harrell scored for the Cardinals, Brogdon made one of two free throws, pushing Virginia’s lead back to five and the Cardinals ran out of time.

An alley-oop pass to Harrell tied the game at 13 with 10:32 left in the first half, and the Cardinals didn’t score again before halftime. Louisville missed its last 11 shots in the half and had to feel fortunate Virginia wasn’t leading by much more.