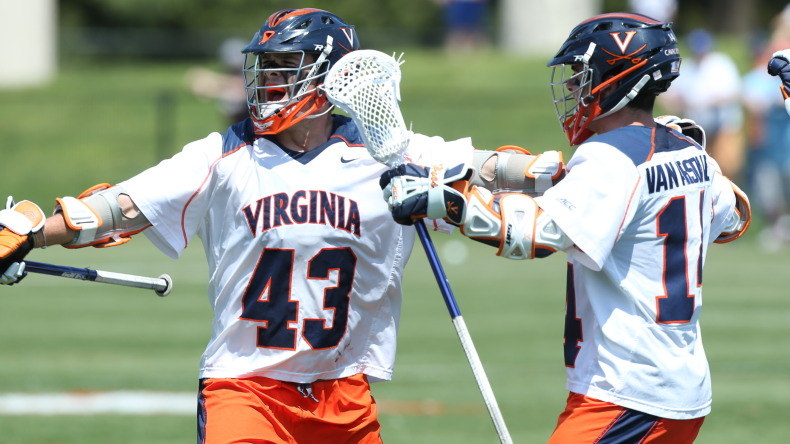 CHARLOTTESVILLE, Va. — Ryan Lukacovic scored four goals and dished out three assists to lead No. 9 Virginia (9-4) past No. 14 Georgetown (8-5) on Saturday afternoon, 12-9, inside KlÃ¶ckner Stadium. Trailing 3-0 early, the Cavaliers utilized a 10-2 run to gain control of the Hoyas on Senior Day.

“I thought the difference was the play in the middle of the field,” said Virginia men’s lacrosse head coach Dom Starsia. “We started to pick the ball off the ground. Our face-off guys and our wings were good (at that). Mike Howard picked up a big ground ball coming out of the box. I thought all of those things propelled us to get control of the game. I thought it was a real `team’ win overall. You’re playing against a team that’s playing zone, you have to take what they give you and I thought we did a good job with that. We turned the ball over a couple times in the third quarter and I was disappointed (with that) because I thought that kind of slowed us when we had some momentum. But I thought it was a steady effort after a slow start. It is a good win, it was a really good win for us and it propels us into our final game of the season.”

The first nine minutes of the game belonged to the Hoyas. Georgetown opened the game on a 3-0 run. Devon Lewis, Mitch Hugdahl and Bo Stafford all scored for the Hoyas. Stafford’s goal capped the run with 6:01 left in the first stanza.

Greg Coholan found nylon with 2:07 left in the first quarter to dent the scoreboard for the first time in favor of the Cavaliers. Coholan’s unassisted goal jumpstarted a 10-2 UVa run that gave the Cavaliers a comfortable 10-5 advantage with 10:18 left in the third quarter.

UVa tied the game, 5-5, on a hidden ball trick between Zed Williams and Joe French. Two Georgetown defenders kept hacking on French who didn’t have the ball. Williams deposited the rock into the back of the net with 3:21 left in the second quarter and the Cavaliers didn’t trail again.

“I take no credit for it,” said Starsia. “I knew that Zed had it right from the beginning and I was just hopeful that the referees weren’t going to inadvertently blow the whistle. I think that’s probably just a Joe French/Zed Williams thing. It’s probably just a Canadian, northern New York thing as much as anything else.”

With UVa up 10-5 and 8:13 left to play in the third quarter, Georgetown finished the game on 4-2 run, but it wasn’t enough as the Cavaliers held on for the key non-conference win.

Virginia concludes the regular season on Sat., April 25 against Penn in the ACC/Penn Challenge. The game will be played at PPL Park in Chester, Pa. Faceoff is set for 7:30 p.m. and the game will be broadcast live on ESPN3.