“Taking an analogy from (UVA baseball) Coach Brian O’Connor, we hit some ‘home runs’ with this class,” Fetzer said. “The class should develop into one of the best in UVA history. Each individual fills a specific need to move our women’s program to the next level.” 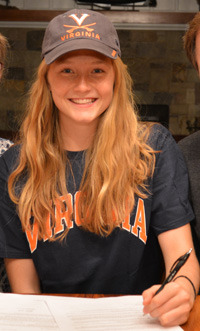 “Emma is one of the top middle distance runners in Virginia for several years now. She possesses great range and will be a great addition to our middle distance group, as well as cross country in the fall. She is a great competitor and I believe has a huge upside.” – women’s head cross country coach Todd Morgan

“I chose UVA because I really felt at home at Charlottesville. Before my official visit, I was somewhat apprehensive, but being there and getting to feel part of the team and part of the student body greatly influenced my decision. First and foremost, I felt the kinesiology program (what I will be majoring in) was challenging and rigorous, and I felt I would learn a lot from being in the program. Additionally, many members of the cross country team were in it and gave high reviews. Next, I felt I really connected with many of the girls on the team, and while I came in not knowing any of them personally, I felt accepted and part of the team. Additionally, I felt confident in Coach Morgan and that he would be able to get me where I want to go in terms of athletics. But overall I loved the atmosphere of the Grounds and the surrounding area. I have always dreamed of going to UVA, after learning that my father, Robert Call, had gone to the university for undergraduate and medical school, and now that dream can become a reality.” – Call 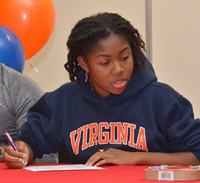 “Anna is a great fit for our program on various levels. She is a proven champion that still has a ton of upside. She will have the opportunity to step in right away and contribute in many ways.” – Fetzer

“I chose UVA because I felt like I was at home. Everything about the school, academics and students alike, is just amazing. UVA is like no other school that I was interested in. I loved the track team and how they easily interacted with each other and the athletic teams. Compared to my visit before, UVA is light years better. My favorite thing about the school is the Honor Code. That was a major plus for me.” – Jefferson 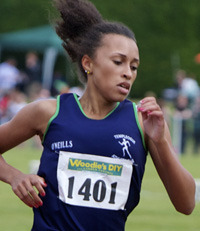 “Nadia is a strong middle distance runner, and has run good cross country as well. She has the potential to become a great 1500m runner here at UVA. Her experience competing on several Irish National Teams should help her transition quickly to the NCAA.” – Morgan

“I chose UVA because as soon as I stepped foot on Grounds, it felt like the right fit for me. Everyone I met was friendly and welcoming and I loved the atmosphere on Grounds and in Charlottesville. When choosing a college, I was looking for somewhere I felt I could reach and extend my athletic potential while getting a good degree. After speaking with the coaches, seeing the amazing facilities and meeting the team, I couldn’t see a reason why UVA wasn’t the place I could do this. The impressive academics and huge range of degrees were also a big attraction for me as I know that this is just as important as running. I can’t wait to begin my time in UVA.” – Power 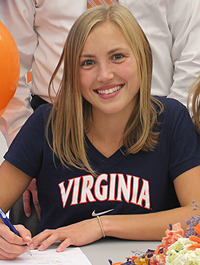 “Olivia has improved consistently throughout high school and that has continued with her winning the Pennsylvania State Championship in cross country this November. She has also put up some very strong mile and two-mile times on the track. We are excited for her to join her sister here next fall.” – Morgan

“I fell in love with the school the moment I stepped foot on Grounds. I knew right from the start it was the perfect fit for me. Everything about Virginia just blew me away from the outstanding academic and athletic programs, to the atmosphere on the Corner. I also love the history and traditions that are such a huge part of the University. Plus, my sister (Sara) is on the cross country and track team and I think it’s so cool that I’ll get the chance to be her teammate again. The real question here is, why wouldn’t I choose UVA?” – Sargent 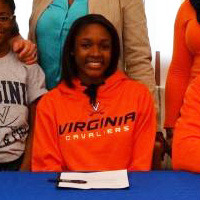 “We are always trying to keep Virginia’s best at home that are the correct fit for UVA. Alexis is relatively new to the sport and has made a rapid rise to one of the nations best.” – Fetzer