CHARLOTTESVILLE, Va.-Virginia swimming and diving head coach Augie Busch has announced that 13 student-athletes – nine swimmers and four divers – have signed National Letters of Intent to join the Cavaliers in Fall 2016.

“I am ecstatic to welcome these young people to our swimming and diving program,” Busch said. “This was a very exciting recruiting season. We feel honored these outstanding student-athletes have chosen UVA. They are all strong athletes and prioritize their academics in a way that makes them great fits here at UVA. They all have the chance to make very positive impacts competitively and, after getting to know them well, will do nothing but enhance the culture for which we strive within our teams. It will be so fun helping these fine young men and women develop over the next four years. As a staff, we are very much looking forward to it.”

“I’m excited to start working with the class we just signed,” UVA head diving coach Jason Glorius said. “All four of them are passionate about UVA and diving. All of them share our vision for the program and have lofty goals for their college academic and diving careers.”

“We are so excited to bring Ryan into our program. It’s always exciting when you are able to bring in someone whose parent (Beth Baker) has made such immense contributions to the program in so many ways. He is a guy whose talent, competitiveness and excitement for the sport will immediately impact our team. It is fun to think about the contributions he will make on all relays. His versatility puts him in position to make a difference on all of them. He is a guy we will lean on heavily the next four years and we can’t wait to get him here to Charlottesville.” – Busch 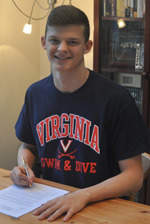 “Joe was gifted with tremendous swimming talent. It is unmistakable when you watch him race. What is equally exciting is his apparent love for the sport and desire to maximize his abilities in it. He will bring needed depth in 100 and 200 freestyle events, and has the kick to make big contributions in back and fly as well. I am excited to get him to Virginia to help him realize his potential.” – Busch 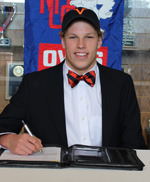 “Henry is going to blossom into a fine swimmer. I think ‘raw’ doesn’t even begin to define him. He has the physical characteristics you look for in a sprinter: tall and long with a body that will handle the muscle gain that is sure to happen here within our weight program. He is explosive, with muscles that are loaded with fast-twitch capacity. He is also a great guy from a great family and we are so happy he has chosen UVA.” – Busch

“Samson is a fantastic diver. He has something you can’t teach and that’s raw power. He’s had success at the national level and I look for that to continue here at UVA. Even with his past success, Samson is just scratching the surface of what he can do.” – Glorius

“It is going to be fun watching Jared develop at the next level. He has had massive time drops in the past one-and-a-half years, which normally bodes well for a swimmer’s college years. He will add needed depth to our breaststroke group after losing three fourth-year breaststrokers. We’re excited to get him here and continue his rapid development.” – Busch

“We are so happy to welcome Jason to the team. It is rare that you get to coach brothers, but that will be the case next year with Jason and Austin both on our men’s roster. I believe he shares a lot of the talent that makes Austin such an important piece of our puzzle. He has a great training background, great versatility and a skill set that will only get better as it is refined. I think he will have a special career here at UVA.” – Busch

“We are thrilled Ted chose UVA. Athletically, he has great versatility, having already proven to swim fly, back and IM at a very high level. He also possesses enough speed where we will lean on him for relay contributions. Above all, he is a great guy who is excited about being a member of our team, and we are equally excited to have him.” – Busch

“Bryce’s diving success speaks for itself. He has excellent strength, quickness and entries. Bryce has a ton of experience at the national level in all three events. It will be exciting to see how good he can be.” – Glorius 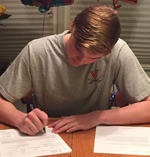 “I believe John is going to explode in college. When I first saw him swim, he absolutely stood out. He is big, athletic, and has great feel for the water. His times are nowhere near where they will be in a short period of time. I expect him to come in and battle for relays spots his first year at UVA. It will be very fun helping him realize his huge talent in this sport.” – Busch

“Sydney is extremely quick and explosive. Her gainer and twisting action is especially good. She loves competing and is excellent at stepping up when it matters. Sydney is motivated to help our women’s team finish even higher at NCAA’s.” – Glorius

“I think there are special things on the horizon for Morgan. She can get a lot stronger, which, considering how fast she has already swum, is exciting to think about. We want a large, talented sprint group to which Morgan will add tremendous depth. It will be exciting to plug her in to sprint relays that we think will hit unprecedented heights this season.” – Busch

“Bailey has tremendous strength, flexibility and entries. She loves competing on 3-meter and tower (platform). Bailey is no stranger to hard work and I expect that to continue here. She too shares the desire to help our women’s team achieve their goals.” – Glorius 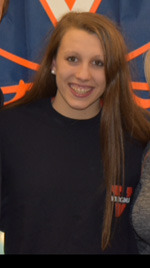 “Madeleine fit so well with the team on her trip. She connected instantly with all of the women so to say she will add great things to the attitude and spirit of our team goes without being said. She is a very talented young breaststroker who is a tenacious racer and knows what she wants out of the sport. We’re looking forward to bringing her in and working with her.” – Busch