CHARLOTTESVILLE, Va. (AP) The first time No. 7 Virginia and Virginia Tech met on a basketball court this season, the Hokies played probably their best game of the season and the Cavaliers played what rates as their worst, and the bad taste of the Cavaliers’ two-point loss has lingered ever since.

Anthony Gill and his teammates made amends Tuesday night with a crisp and focused approach that picked apart the Hokies’ defense and shut down their offense in what became a 67-49 victory, the Cavaliers’ seventh straight.

”That whole span of games that we played and we didn’t win kind of got under all of our skins,” Gill said after scoring 16 points in the rematch. ”We all understood that that’s not the way we play UVA basketball.”

The Cavaliers turned the tables in a big way as Isaiah Wilkins added a career-best 14 points and Malcolm Brogdon had 12. Virginia (20-4, 9-3 Atlantic Coast Conference) stretched its winning streak at John Paul Jones Arena to 17 games largely with a defensive effort that saw the Hokies shoot 35.6 percent (16 of 45) and spend most of the game with more turnovers than field goals. They ended with 15 turnovers.

Wilkins did much of his scoring on mid-range jump shots, a shot that has become less and less common in the college game.

”That’s so important when we can get that sort of contribution,” Virginia coach Tony Bennett said. ”Malcolm has been scoring so well, and Anthony and London (Perrantes) too. When we can get another guy that gives us output offensively, it really balances our team.”

The Hokies’ starting lineup finished with just 26 points on 9-for-23 shooting.

”We did miss some layups I think that you have to make in a high major game, but their defense is outstanding,” Hokies coach Buzz Williams said.

Freshman Justin Robinson scored 16 points and classmate Chris Clarke had 11 in his first action for the Hokies (13-12, 5-7) since breaking his right foot in late December. Virginia Tech’s top two scorers, Zach LeDay (16.0 ppg) and Seth Allen (14.5), were limited to seven and six points, respectively, in part because of foul trouble, but the pair also combined to make only 4 of 16 shots from the field.

Bennett said his team wasn’t ready to play when it lost to the Hokies earlier, but they were credited with assists on 14 of their first 15 baskets and forced 10 turnovers in the first half; they forced just eight in the last meeting of the teams.

The Cavaliers led 32-20 at halftime and extended their advantage to 47-29 on a three-point play by Mike Tobey with 12:11 remaining. It capped an 11-4 run for Virginia, during which LeDay was whistled for his fourth foul. On Virginia’s next trip down court, it got the ball to Gill inside and LeDay basically backed off and let him score, quickly earning a spot on the bench.

The Hokies had just eight turnovers and outscored Virginia 26-6 off turnovers in their first meeting. This time, Virginia Tech had 10 turnovers by halftime and the Cavaliers had already turned them into 15 points. Virginia Tech finished with 16 field goals and 15 turnovers.

Already leading 9-6, Virginia got scoring from eight players in a 23-8 run that spanned about 8 1/2 minutes.

Gill started it with a dunk, Brogdon hit a 3-pointer, Perrantes had a four-point play and Wilkins finished it with two free throws, giving the Cavaliers a 32-14 lead with 2:06 left in the half. They didn’t score again, and the Hokies closed within 32-20 by halftime.

WELCOME BACK: The Hokies welcomed back Clarke, who hadn’t since a loss to Saint Joseph’s on Dec. 22 because of the injury. Williams said he practiced 14 minutes on a stopwatch on Thursday, 17 on Friday and 21 on Monday. He was cleared by doctors to play 10-12 minutes.

”I was hoping to get one more basket from him,” Williams said, ”so he played 13 minutes. I’m sure I’ll get in trouble.”

Virginia Tech: The Hokies shot 57.1 percent (15 of 26) from the field in the second half of their 70-68 victory against Virginia on Jan. 4. … Virginia Tech’s starting five totaled four points in the first half.

Virginia: The Cavaliers have held four consecutive opponents to 50 points or fewer.

Virginia Tech plays at No. 12 Miami next Wednesday.

Virginia plays at Duke on Saturday.

The UVA-VT game is part of the Commonwealth Clash presented by Virginia529, which is a head-to-head, points-based competition between the athletic teams of the Cavaliers and Hokies. Virginia leads the 2015-16 series, 4-3.5. 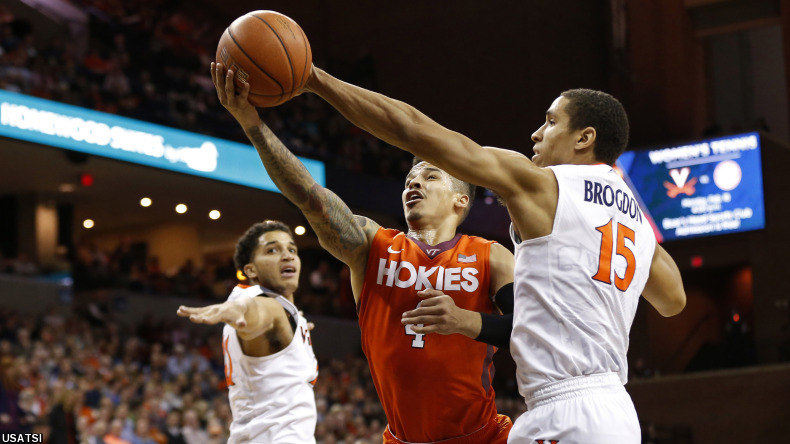