CHARLOTTESVILLE, Va. – A trio of Virginia women’s tennis players, two former players and one current Cavalier, moved a step closer to an appearance at the US Open with victories at US Open Playoff Qualifying Tournaments.

Julia Elbaba (Oyster Bay, N.Y.), the top seed in women’s singles in the sectional, claimed the US Open National Playoffs Women’s Singles qualifier for the Eastern Sectional in Flushing, N.Y. She picked up a 6-1, 6-1 victory over Dasha Kourkina in the semifinals before fighting back to win in 2-6, 6-1, 6-0 over Rachel Lim in the final to secure her berth in the US Open National Playoff Championships held Aug. 19-22 in conjunction with the Connecticut Open hosted by Yale. 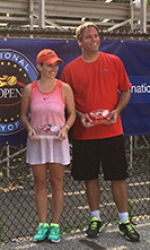 Meghan Kelley (Falmouth, Maine) paired with Veronica Corning to claim the Northeastern Sectional sectional in West Haven, Conn. The duo picked up a straight set win in the semifinals before grabbing a 7-5, 7-5 win in the finals over the team of Carol Finke and Lexi Milunovich. With the win, Kelley advances to the US Open National Playoffs held Aug. 21-24 in conjunction with the Connecticut Open hosted by Yale.

In mixed doubles action, UVA alum Carolina (Hammond) Varga paired with her husband, Chris, to claim the Midwest Region sectional in South Bend, Ind. The duo picked up a 6-3, 7-5 win in the Round of 16 before grabbing a 6-3, 6-3 win in the quarterfinals. The pair then took a 6-1, 6-1 win in the semifinals before advancing with a 7-5, 6-2 win in the finals over the pairing of Martin Joyce and Danielle Wolf. The team now advances to the US Open National Playoffs held Aug. 24-27 in conjunction with the Connecticut Open hosted by Yale.