CHARLOTTESVILLE –– As she stood in front of her locker at Palmer Park, the sparkling new home of the University of Virginia softball program, sophomore second baseman Arizona Ritchie recalled conversations she’d had with fellow student-athletes. She’d invite them to come see her play, Ritchie said Monday, “and they’re like, ‘Where is that? You guys have a field here?’ “

From 1995 through 2019, the Cavaliers played their home games at The Park, a nondescript facility tucked away in a remote corner of North Grounds. The program’s profile could not have been much lower.

If the UVA and Charlottesville communities “knew there was a softball team, they couldn’t find it,” head coach Joanna Hardin said Monday.

That’s no longer an issue. Palmer Park, which is named for former UVA softball great Lisa Palmer and her mother, Frances, is located at the southwest corner of Massie and Copeley Roads, within sight of Lannigan Field, Klöckner Stadium, Disharoon Park and John Paul Jones Arena.

“It’s unreal,” redshirt sophomore catcher Ashley Jennings said. “We’re all obviously so thankful for what we have here, and it’s just convenient to have everything here in one spot. We have our training room, we have our locker room. We don’t have to leave and go to a different meeting space. Everything’s right here, and it’s amazing.”

Last night, the team visited Palmer Park for the first time. The reactions are priceless 😁

The Wahoos moved into Palmer Park on the night of February 24 and practiced there for the first time the next day. While they were on the field, they could hear music from the sound system at Klöckner Stadium, where the UVA men’s lacrosse team was preparing to play High Point.

The UVA women’s lacrosse team played at Klöckner last Wednesday. As had been the case Tuesday, fans on the way to the lacrosse game that evening paused to watch the softball team practicing.

“It was crazy to see so many people just stopping and looking over while we were practicing,” said Hardin, who’s in her fourth season at UVA. “There were tons of people stopping and taking pictures, because it’s finally here.”

It’s been a long time coming. The program’s inaugural season was in 1980, and only once, in 2010, have the Cavaliers advanced to the NCAA tournament. They’ve generally lagged well behind the rest of the ACC, in no small part because of their subpar facilities, which were spread around North Grounds.

After years of discussions among UVA officials about the need to upgrade the softball facilities, a lead gift from Lisa and Frances Palmer helped the stadium project become reality. The groundbreaking ceremony was held on Oct. 13, 2018, and now, nearly 16 months later, opening day at Palmer Parker has arrived.

“We’ve been anticipating this for so long,” Jennings said.

Hardin said: “I’m very interested to see the reaction of fans and opponents, because a lot of our opponents have come and played against us at The Park. This is such a drastic difference. I’m really excited for our fans to have the opportunity to see us.” 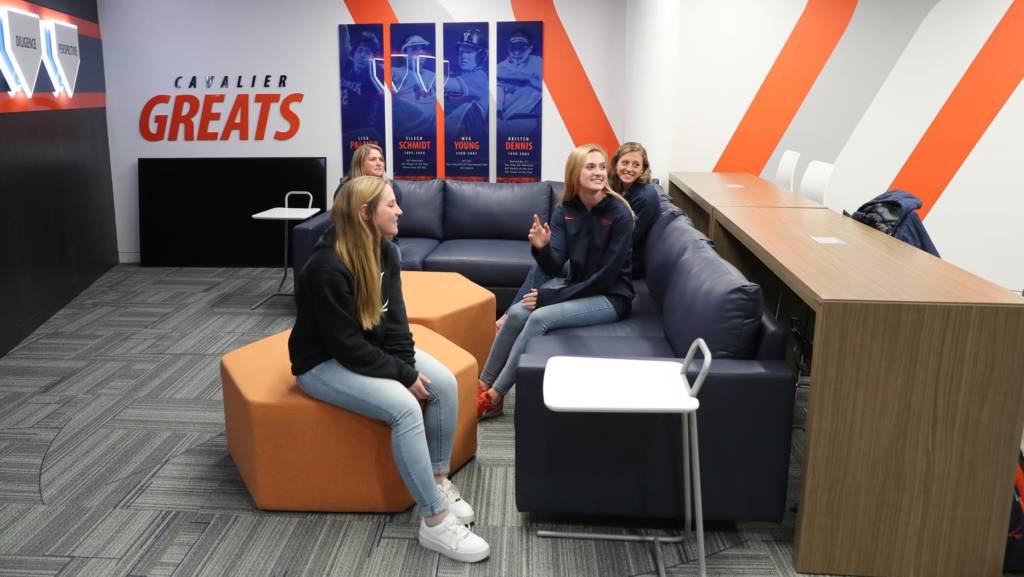 The stadium seats 524 in its bowl, with additional areas for fans on the outfield berm and on a hill near the right-field line. Inside are a lounge, an area for meetings and video study, a conference room for coaches, and an athletic training room.

“We’ve never had a space like this,” said Hardin, whose team will be able to train much more efficiently than in years past.

“This is huge for our program,” Ritchie said. “I think the main thing is, it’s just going to be easier to work harder. We’re going to be able to take extras whenever we want. The commute isn’t going to get in the way, and team-wise, we’re all going to be with each other more, and we’ll get to see our coaches more, which is really important. So relationship-wise, it’s going to make us a much stronger team.”

The Cavaliers still lift weights at Disharoon Park, but Palmer Parker’s features include a player development center with three hitting bays and a pitching lane.

“This is where all the work gets done,” Hardin said, “and it’s super convenient.”

That the Hoos were able to start using Palmer Park last week has helped them acclimate to their new surroundings.

“We moved in on Monday night, and our first hitting group was Tuesday morning,” Hardin said. “We do hitting groups Tuesdays and Thursdays. So we had group work, and then we had team practice for three days [before leaving for an ACC series at Clemson]. We got a ton of reps, a ton of looks. I think the kids will be really comfortable.”

In the locker room, Covington was asked about her favorite spot at the new stadium.

“Probably center field,” she said. “I play center field, so to be able to look at the stadium and look at the field is a really cool view. But within here, the team space is really cool, just being able to hang out together and just have space to live together. It’s just awesome.”

In November, a highly regarded recruiting class signed with the Cavaliers, and Palmer Park figures be a major asset for Hardin and her staff in their efforts to add more talent to the program.

“I think it’s going to be absolutely huge,” Covington said. “Not even just the size of the stadium, but the location of it, just being in the center [of the North Grounds athletics precinct], right next to JPJ, right next to baseball, right next to lacrosse and soccer and track. I think it shows that the athletic department cares about softball and is invested in our program and believes in us, and I think for recruits that’s huge, just to know that softball matters here.”

UVA fields successful teams in almost every sport, and softball wants to do its part, Ritchie said. “This going to help us get there.”

Starting Friday, Virginia will host a three-game series with ACC rival Virginia Tech. Lisa and Frances Palmer will be at the stadium for a dedication program that’s scheduled to start at 1:45 p.m. Friday.

Lisa Palmer, a dominant pitcher for the Hoos in the late 1980s, was named to the ACC’s 50th anniversary softball team in 2002. She lives in Jacksonville, Fla., where she’s president and chief executive officer of Regency Centers Corp.

“She’s been successful in her career and coming out of UVA and UVA softball,” Covington said, “and that she’s had the opportunity to give back, and she wants to give us the same opportunities, is really inspiring.”