CHARLOTTESVILLE –– Every day she reports to work in New York City, Hunter Terry sees more evidence of the COVID-19 pandemic’s spread. She’s in her first year as an OB/GYN resident at NewYork-Presbyterian/Weill Cornell Medicine in Manhattan.

Most of the time when she’s on the labor floor at her hospital, Terry said, she’s wearing an N95 respirator underneath her surgical mask, as well as a face shield.

“So much has changed in the last three weeks,” Terry said. “We are taking it day by day, but it’s pretty grave. Our hospital is pretty much converted to a COVID hospital now. In the city, they are re-organizing the hospitals so that hospitals that aren’t dedicated to essential surgeries, like transplant services or dedicated pediatric centers, can almost become COVID critical care units.”

Terry graduated in 2012 from the University of Virginia, where her classmates included Sarah Borchelt. They were also teammates who helped UVA win NCAA rowing titles in 2010 and 2012.

Borchelt, who lives in Charlottesville, is a nurse practitioner at Augusta Health in Fishersville, about five miles west of Waynesboro. Her hospital is preparing to deal with COVID-19.

“It’s definitely more isolated and rural over here compared to some of the cities that are really getting hit hard,” said Borchelt, who has two nursing degrees (BSN and MSN) from UVA. “I can’t imagine being in New York right now.”

In Fishersville, Borchelt said, it “really does remain to be seen what could come of it, because my hope is that people have isolated long enough now before it gets bad that we don’t see a huge surge. We’re not at a point where we have active cases, in the hospital at least, so we’re kind of in preparation mode for what that could look like and making sure we’re as prepared as possible.” 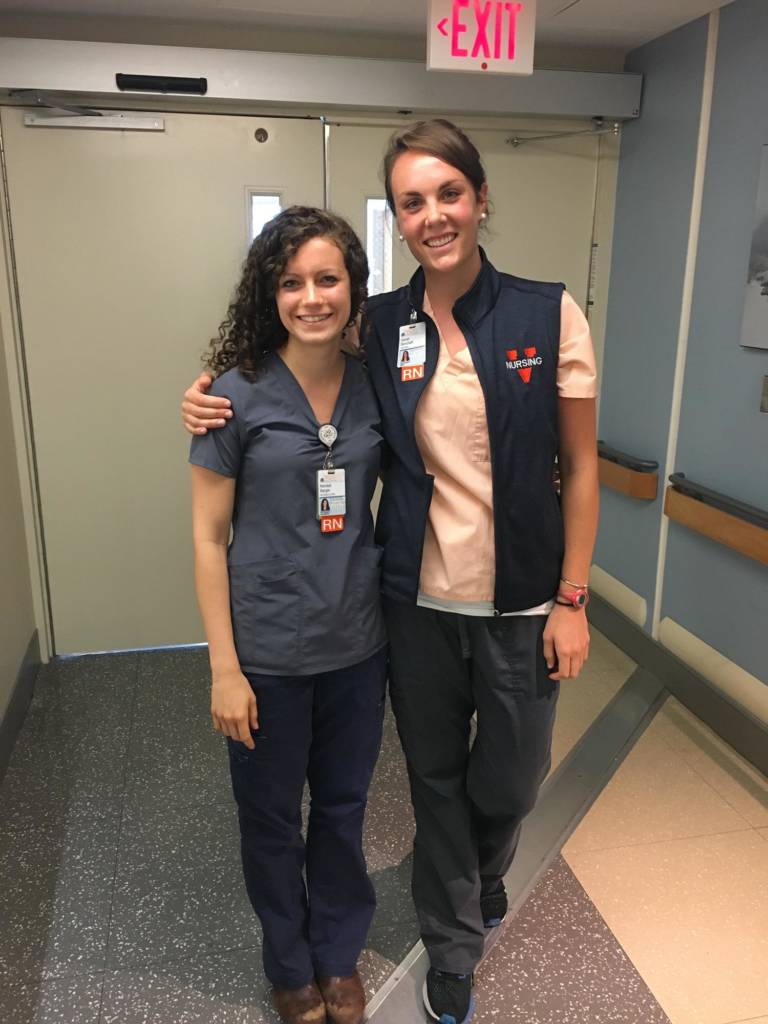 In Tampa, Fla., a current member of the Virginia rowing team, coxswain Colette Glass, is working as a medical assistant at Exodus Women’s Center. A third-year student, Glass is also taking online classes while living at home with her parents, who are doctors.

Many of those classes are in UVA’s nursing school, but she’s also studying to become a certified nursing assistant in Florida, Glass said, “which would allow me to actually work at a place like Tampa General Hospital.”

Kevin Sauer has been the Cavaliers’ head coach since the program gained varsity status in 1995. His wife, Barb, is a nurse, as is their daughter, Kelly, and scores of his program’s alumnae have gone on to become doctors and other health-care professionals. Another rower who graduated with Terry and Borchelt, Ruth Retzinger, is a registered nurse who’s been working in Richmond.

“I think it’s just this group of great kids,” Sauer said. “They want to give back. They want to do things that help people, whether it’s Peace Corps or the medical field or teaching. Whatever it is, they do some incredible things. I’m so proud of them. They get out there and do really, really hard things.”

Their backgrounds in rowing help them tackle those challenges.

Rowing is an exceptionally demanding sport, and “I already feel like I’ve put in the long hours and early mornings, because I have over several years,” Terry said. “So I think that is a benefit to have when you’re working 80-plus hours a week [as a resident], because you know that you’ve already been through a time when you’ve been super-focused and tested in the same way that you are in residency.”

“One hundred percent,” she said. “I think that there is a definite overlap, just in the sense that, on a normal day, you have to work well with a team no matter where you are. There are very few people in health care that are managing something all on their own. And so learning how to be a member of a team that respects other people and communicates and works towards the same goal, while also knowing someone else’s strengths, is a huge part of what rowing teaches you, and it’s applicable in health care, especially right now.”

Terry, whose sister, Paige, also rowed at UVA, grew up in Connecticut. She studied at the University of Edinburgh in Scotland for a year before transferring to UVA. She earned a bachelor’s degree in foreign affairs from the University but then “realized I wanted to work more directly with people,” Terry said.

She used her final year of athletic eligibility at the University of Iowa, where she took the science classes required for med school and rowed for head coach Steve Pritzker. He’d previously been associate head coach at UVA, where he’s now the chief financial officer for the athletics department. 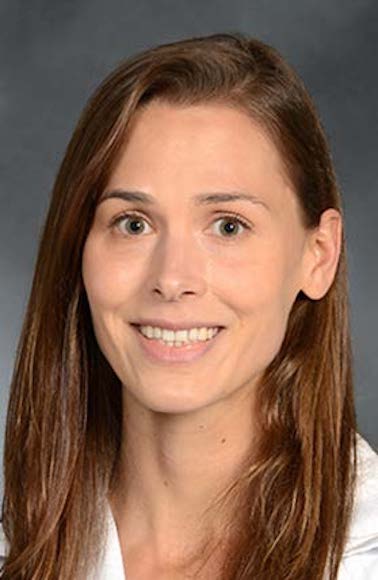 Hunter Terry
She decided to become an OB/GYN, Terry said, in part because of her rowing background. “You’re surrounded by empowered, strong women all the time,” she said. “That’s definitely one of the influences that made me interested in women’s health, and then being a surgeon.”

Her work has become increasingly stressful. NYP/Weill Cornell is “still delivering patients, as we usually would,” Terry said Saturday, “but we’ve been taking on an increasing percentage of women who are COVID-positive. About 10 percent of our floor is now COVID-19, and about half of them are asymptomatic. About half of them have fever or cough. About 10 percent positive of those are hypoxemic and need to be managed, given the concern for acute respiratory failure.

Terry said three of her fellow residents were redeployed last week to the hospital’s intensive care unit, and she expects to join them there this month.

The face shields help prevent COVID-19 from entering mucus membranes such as the eyes, nose and mouth. “The critical care attendings emphasize that COVID is spread from your hands to your face,” Terry said. “So always wash your hands, never touch your face.”

Borchelt, who grew up in Massachusetts, is in her first year at Augusta Health, where she specializes in palliative care. Before joining the staff there, she worked as a nurse in the medical ICU at the UVA Medical Center. That’s now the COVID-19 unit at that hospital.

This is a surreal time for health-care professionals, Borchelt said. With the pandemic spreading, “I’ve had to temper my fear and try to just be as prepared as possible, but my background is as an ICU nurse,” she said. “And so there’s this understanding of what that could look like and what it would entail if it got bad, not to mention what it probably does look like in other states right now.” 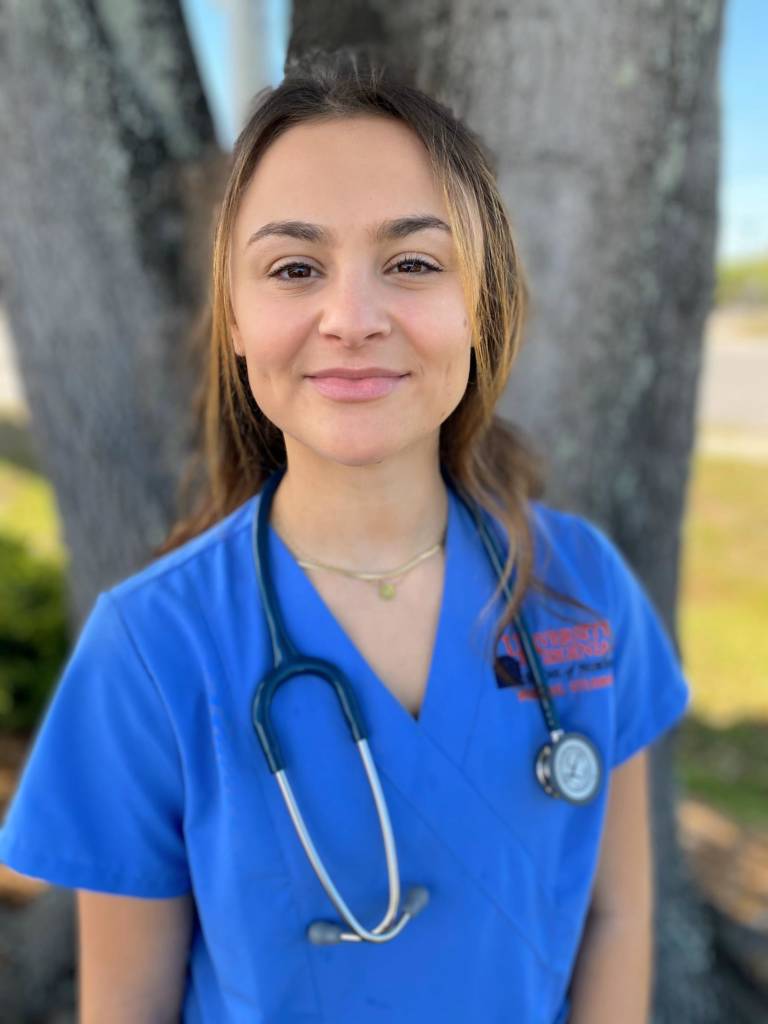 At her OB/GYN clinic in Tampa, Glass said, protocol has changed dramatically.

“Last Wednesday, there were about 40 to 50 patients coming in, and it was business as usual,” Glass said Saturday. “Now, patients can’t stay in the lobby. They have to stay in their cars, and it’s tough, because a lot of them don’t have cars or drive there. So they’re waiting outside in the heat to be seen, because they’re pregnant, and this pandemic doesn’t stop the fact that they’re going to have a baby in a few months.”

Glass was the coxswain on UVA’s top boat, the Varsity Eight, when the season was abruptly canceled last month because of concerns about COVID-19. After learning she’d be returning to Tampa to start online classes, Glass said, she realized this was “possibly a once-in-a-lifetime experience to live through, and I wanted to be a part of it medically.”

She’s working about 30 hours a week at the clinic, and her UVA professors, who are “all nurses or in the nursing realm,” have been “incredibly supportive,” Glass said. “So when I can’t log on to my Zoom class at 2 p.m. because I’m at work, they’re pre-recording it and are allowing students to access it that way. I basically get home at 5:30 and sit down at the kitchen counter and watch my lectures.”

When Glass told her professors about her job in Tampa, she said, their “response was basically, ‘Go learn everything you can, and I can’t wait to sit down with you and chat after about how it went.’ “

She wears gloves and a mask at the clinic. “We screen all the patients before they come in, but there’s the whole issue of being asymptomatic,” Glass said. “And while we’ve already restricted who we’re seeing, I think it’s going to become more restricted and become essential patients only. It’s sad, because how do you decide who’s truly essential and who’s not when it comes to things like this?”

Glass is scheduled to start an externship as a certified nursing assistant on the OB/GYN floor at Georgetown University’s hospital late next month. Like Terry and Borchelt, Glass said rowing has taught her lessons she’s applied in other areas of her life.

“I love task-based activities,” Glass said. “I want to be a part of something, and I want to be a team member in a group of people who are doing something really cool and great for a greater community, which I think is what rowing really has been for me at Virginia. It’s a big school, and being on this team has made it feel like a very small, tight-knit community of just such immense support.

“The community that we have with our team and my personal experience with the girls on the team, I can’t even explain how lucky I feel to be a part of it, and obviously I’m lucky that I have more time.”

Chaudoin Thrilled About Return to UVA