CHARLOTTESVILLE –– When the University of Virginia announced in mid-March that it was switching to online classes, most students headed home, if they weren’t there already. For Mattison Matthews, home is Charleston, S.C., and her parents ordered a volleyball net for her and set it up outside the family’s house.

The only problem, Matthews said Thursday, is that she has no one except her mother and father to practice with during the COVID-19 pandemic. She’s able to run outside, but she has no weights at home and no gym at which to work out. And so she’s had to improvise.

“For the different workouts, I find myself finding different gadgets down in my dad’s garage,” said Matthews, a middle blocker who in 2019 set a UVA freshman record with a .382 hitting percentage. “It requires me to be a bit creative.”

She’s had help in that area from Mel Willison, the strength and conditioning coach for UVA volleyball. Willison suggested that players without access to weights ttry lifting something found in most homes.

“I have a whole shelf full of milk jugs that we’ve been collecting,” Matthews said, laughing. “I have them filled with sand from out of my nephew’s sandbox.” 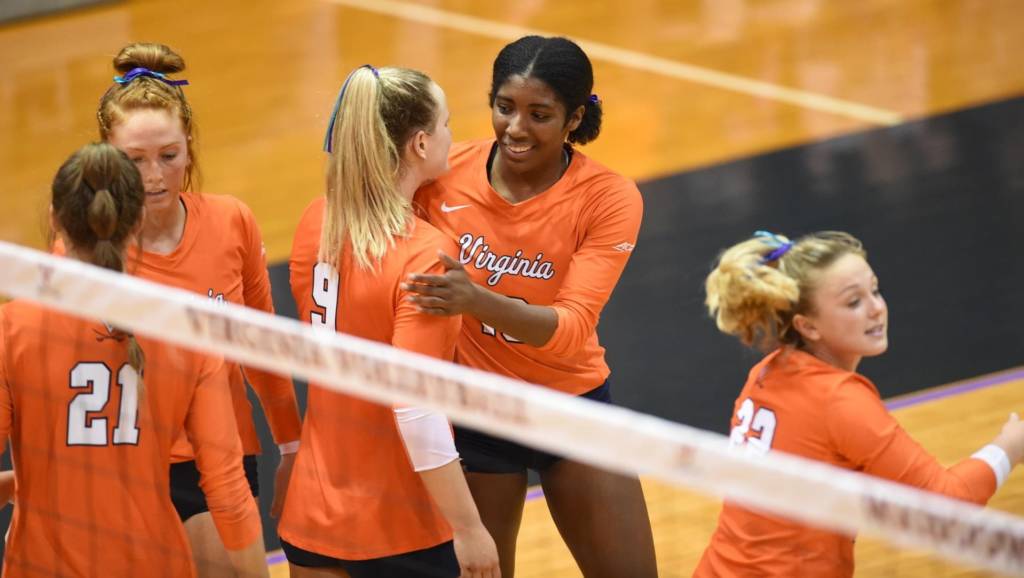 Matthews came to UVA last summer after graduating from Ashley Hall, an all-girls school in Charleston that she attended for five years. In each of those years the South Carolina Independent School Association named her all-state in volleyball, and Matthews was twice named the SCISA’s player of the year.

As a senior she led Ashley Hall to the SCISA’s Class AAA state title, and she also starred for the Upward Stars club, which is based in Spartanburg, S.C., about 200 miles from Charleston.

“The same reason why I chose Virginia was the reason why I knew that I needed to invest in that club,” Matthews said. “We all had one single goal in mind, and we were all committed to volleyball, and that created a sense of community that I didn’t really have in any of my other clubs.”

UVA head coach Aaron Smith said: “I think that speaks to Matti’s commitment to the sport. She’s someone that just truly loves playing volleyball. You don’t ever have to question if her head is in the practice.”

Matthews’ club team practiced on Tuesdays and Thursdays in Spartanburg. The length of her commute “depended on the traffic,” Matthews said. “Traffic was usually terrible, and it usually took three-and-a-half hours each way.”

Her father handled the driving. “He’s a trouper,” Matthews said.

Matthews’ teammates at UVA include another standout from the Charleston area: setter Maddie Boylston, who starred at Wando High School in Mount Pleasant, S.C. They played together for several years in the MVP Volleyball Club, and Boylston, like Matthews, enrolled at UVA last summer.

Boylston, the South Carolina High School League’s Class AAAAA state player of the year in 2018, played in 24 matches for the Cavaliers before suffering a season-ending injury last fall. Matthews played in 28 and posted the second-best hitting percentage in program history.

“She’s going to have a monster career if she keeps working hard,” said Smith, who believes Matthews deserved a spot on the ACC’s all-freshman team.

At 5-foot-11, Matthews is undersized for a middle blocker, but that hasn’t hindered her on the court. “She doesn’t come off as short,” Smith said.

It’s not uncommon to find middle blockers who stand 6-foot-2 or taller at the Division I level, “but I don’t think we ever been concerned about Matti going up against an opponent where she was just outmatched,” Smith said, “because she’s so physical compared to some taller kids.”

“Her attitude is, ‘Hey, if somebody’s playing better or you think there’s a better matchup, put them in,’ ” Smith said. “She wants to be on the court really bad, but whatever is going to help the team, she’s all for it.”

And then there’s Matthews’ natural exuberance. “I walk into the gym, and nine times out of 10, she can be on the other side of the gym, and she’ll just see me and just come running over and give me a high-five, sometimes even a hug,” Smith said, laughing. “She’s that way with everybody that comes in the gym.”

Matthews said: “I’ve always been that way. It just makes me so excited when I’m on the court playing volleyball with teammates, with people I love, just doing the thing I love.”

Before taking over as head coach, Smith was Dennis Hohenshelt’s top assistant at UVA. Matthews took an unofficial visit to Virginia back then, but “I was really early in my high school years, I guess, and I wasn’t ready to make any type of decision,” she recalled. “I was feeling everything out, and then I felt like communications [from UVA] kind of dropped off a bit. But then once Aaron took over he picked up communications again. I visited again, and I fell in love with the campus that second time around. It was amazing. It clicked.” 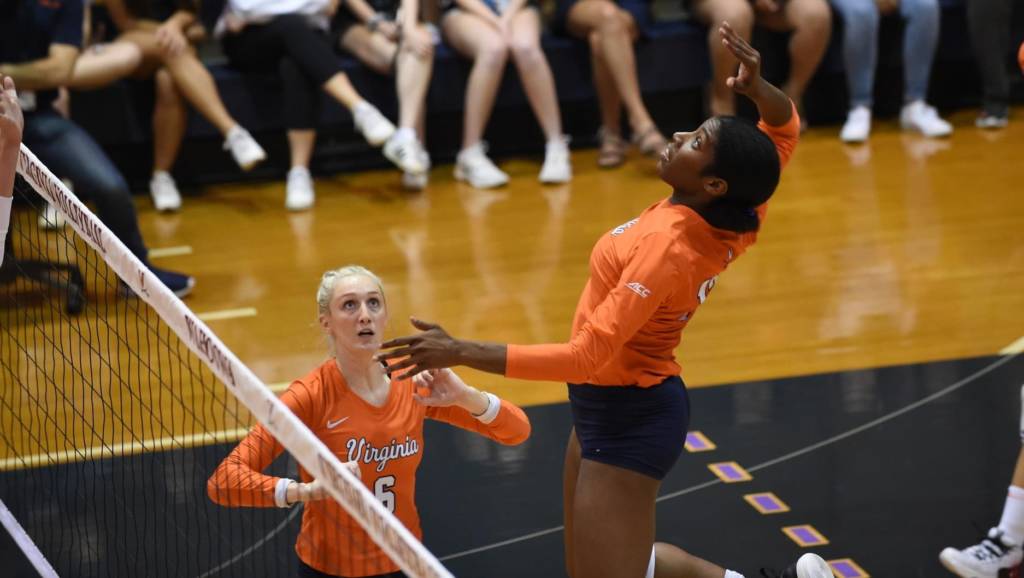 She’s heading into her second year in the Curry School of Education and Human Development’s kinesiology program. Her mother is a lawyer, but Matthews, who has three older sisters, is interested in another career path.

“I really want to do something in medicine,” she said. “Right now I’m looking at becoming an orthopedic doctor. I interned my junior year at an orthopedic office, and I fell in love with every single part of it. I’m keeping all my options open and exploring everything, but that’s really what I want to look into.”

Her first year at UVA was both fun and taxing, Matthews said. “I faced so many challenges, both academically and athletically. Honestly, it was like I was on a fast-moving train that whole first semester. But you get so much reward for the work that you put in.”

The 2019 season started in promising fashion for the Wahoos. After defeating Virginia Tech at Memorial Gymnasium in late September, they stood 9-6 overall and 1-1 in the ACC. A series of significant injuries to key players eventually took their toll on the Hoos, and they finished 13-18 overall and 5-13 in ACC play. But they won four of their last seven matches, including a 3-0 road victory over the Hokies in the season finale, and figure to be much-improved this fall.

“We’re on a roller coaster that’s only going up,” Matthews said. “I’m so excited to get back in the gym with the newcomers. I see so much potential in all of us, and it’s really exciting. I can hardly wait. As soon as this pandemic is controlled, I’m ready to get started.”