Dawson Finds Coaching To Her Liking

CHARLOTTESVILLE –– Play field hockey, travel the world. When Rachel Dawson picked up the sport as a girl, that wasn’t necessarily her plan, but the list of places in which she’s represented the United States is an impressive one.

As a Olympian, Dawson competed in Beijing (2008), London (2012), and Rio de Janeiro (2016), and she’s also played in such countries as Russia, Bermuda, Mexico, Canada, Azerbaijan, Ireland, Scotland, Italy, Spain, and the Netherlands.

Her coaching résumé isn’t as lengthy. Dawson didn’t retire as a player until October 2016, and she didn’t enter the next phase of her field hockey career until the next summer, when she joined head coach Michele Madison’s staff at the University of Virginia. But she’s rising quickly in the profession.

In January, Dawson was named head coach of the U.S. Women’s National Development Team, for which she’d spent the previous year as an assistant. In the USA Field Hockey system, that’s the squad between the Under-21 national team and the senior national team. Its 2020 schedule included an April tour of Scotland, and Dawson was eager to see the United Kingdom again.

To prepare for the tour, the team, whose players include former UVA standouts Carrera Lucas and Erin Shanahan, held a training camp in Northern California in February. Dawson’s team scrimmaged Cal-Berkeley and the San Francisco-based Olympic Club, “just to get some games in,” she said.

Before the team could leave for Scotland, however, the COVID-19 pandemic forced the cancellation of the trip. With no U.S. team to coach and no spring season for the Cavaliers in Charlottesville, Dawson spent some time in her native New Jersey with her mother. She also gained a following on Instagram, where she would post videos of her workouts.

“I kind of did it spontaneously,” Dawson said, laughing. “If you know anything about me when it comes to sports, my background is in going out in the backyard and just making things up. I love creating. I came from a really big family, and we would just go in the backyard and play games.

“So when COVID happened, I was kind of bored, and I said, ‘OK, I love field hockey. What could I create given all of these restrictions and conditions?’ So I just started making things up [and posting them on Instagram], and I had a couple people say, ‘Hey, I love your videos, I’ve been doing them.’

“I kept posting them and they were fun and people gave feedback that they helped them and sparked their own ideas, and I think that’s what I really wanted to do: help people to realize that even with the constraints we were in, that there were ways to create and train and have fun. And that was really cool, because I think sometimes our sport environments are so scripted and structured that free play is fun.” 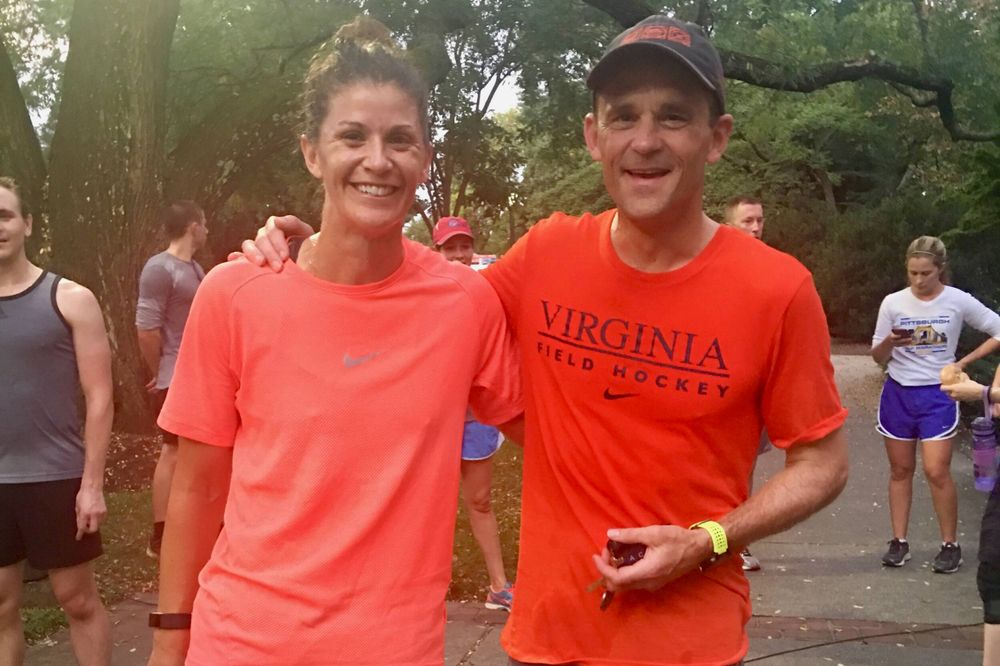 Dawson, who has eight siblings, comes from one of the first families of U.S. field hockey, and she had an extraordinary career as a midfielder at the University of North Carolina. As a fifth-year senior in 2007, Madison’s second season at UVA, Dawson led North Carolina to the NCAA title and received the Honda Award as the nation’s top player.

She joined the U.S. national team in 2005 and went on earn 298 international caps. Dawson spent the 2010 season as an assistant at Princeton, but she never expected to make coaching her profession.

After retiring as a player in 2016, she started a business, Praxis, which focuses on the development and wellness of athletes.

“During my sports career I felt like I was exposed to so many different resources,” said Dawson, a gifted and thoughtful writer who posts on praxisathlete.com, “but I started to see that sometimes we celebrate the performer so much that the person behind the performer gets lost.”

Dawson said she wanted to help “provide resources for individuals during that time in their careers, in a space where they can really explore who they are in sport and not just what performance they leave on the field. So I took a year away from hockey, just to find myself and figure out what I wanted to do, and I missed it. A lot. I just missed being on a team, being on the field, being in the intimacy of the work that I think sport requires. You can’t hide from yourself. You can’t hide from all the feelings and emotions and challenges sport brings. You have to face it head-on, and every day the challenge is different.”

When an assistant’s position opened at UVA in 2017, UNC head coach Karen Shelton mentioned to Madison that Dawson might be a good candidate. Madison knew Dawson, having coached her on the U-21 national team. “I asked her if she’d consider giving it a shot,” Madison said. “We agreed on the mind-body-spirit development of an athlete, and I sold her on Charlottesville, and I knew her competitive fire would help the team.”

In 2019, Virginia advanced to the NCAA tournament’s final four for the first time in nine years. One of the program’s strengths is its stable staff. Dawson’s fellow assistant coach, Ole Keusgen, is heading into his sixth season at UVA, and he’s head coach of the United States’ U-19 women’s national team.

The Cavaliers’ coaches, Dawson said, “each bring divergent experiences and perspectives. You have Ole, who’s coming from Germany and the international game, and the Germans play a certain style. You have Michele, who was a goalkeeper as a player and then has this wealth of experience as a coach in tons of different programs. And then you have me who’s coming from this really intense and very recent playing background. So I think what’s really cool is we all kind of bring a different perspective to different things, and then we sort of integrate each perspective and find the solution that works in the moment for our team.” 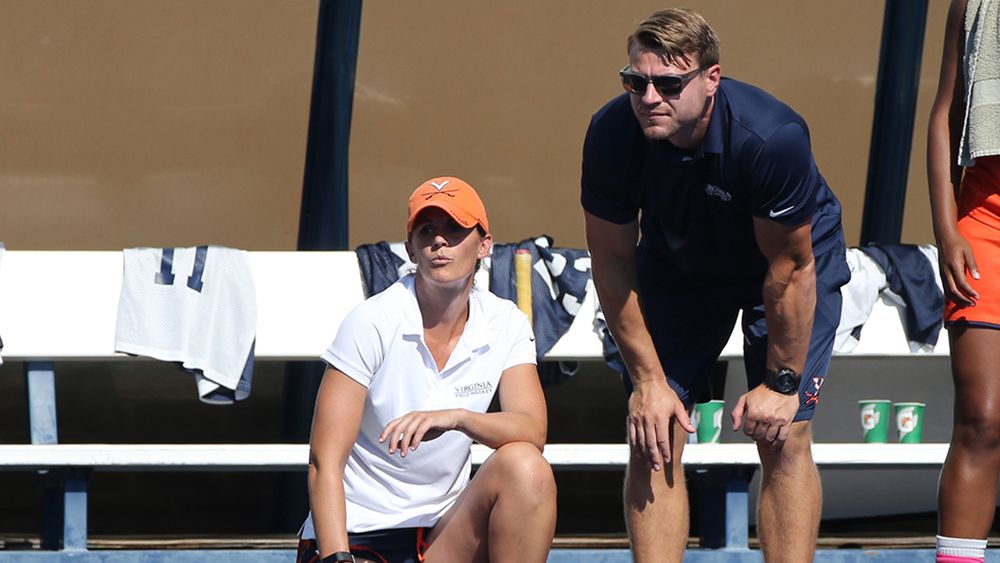 Madison, who’s also been head coach at Temple and Michigan State, encourages her assistants to be active with USA Field Hockey. She received similar support from her mentors as a young coach.

“The growth I experienced at that level, it just opens your mind to [different approaches],” said Madison, who served on the U.S. staff at the 1988 and 1996 Olympics.

Dawson said Madison “sees that Ole and I have a real passion for the game, and the curiosity and ability to lead, so she encourages it and supports it and offers perspective on what she’s seen in her experience with the U.S. programs and her experiences at UVA.”

Madison said: “My job is to prepare them to be head [college] coaches. I think both of them can be, if that’s what they want.”

Eventually, Dawson said, “I could see myself in a head coaching role. Am I looking to do that right now at this exact moment? No. I’m a big believer in when the opportunity presents, just be ready for it, and so far nothing has captivated me that much. I’m happy, I’m learning and growing and exploring. But I’m open to whatever possibilities exist.”

She’s come a long way from her first Olympic experience.

“In Beijing, you’re wide-eyed, bushy-tailed,” Dawson said. “You have no idea what you’re getting into. You’re just happy to be there. It was the first time the U.S. had qualified outright in 20 years. We played in Atlanta [in 1996], but we got the automatic bid that year. So 2008 was amazing. We didn’t know what we didn’t know, and we did all right.”

“So that was a real bittersweet Olympics, I would say, in that we knew we could have done better, but there were some cultural issues and maturity issues we needed to sort through as a team,” Dawson said.

In 2013, Craig Parnham took over as the U.S. head coach, “and he just re-galvanized the program,” Dawson said. “It was the most intense experience of my life. The things that we were doing in training were insane, and we went to Rio and had a great pool-play experience. Our team chemistry was amazing.”

Her teammates at the 2016 Olympics in Brazil included Vittese. (Selenski was an alternate). The U.S. lost to Germany in the quarterfinals, “so that was really disappointing, but it was an amazing experience,” Dawson said.

She looks forward to more international competitions. For now, though, her focus is on UVA. After four-plus months away from Grounds, the Cavaliers’ players are back in town, going through voluntary works the coaching staff is not allowed to monitor.

“So it’s like torture,” Dawson said, laughing. “It’s such a tease. They’re back, but we can’t work with them.

The wait is almost over. Practices are scheduled to begin next week. In the meantime, the coaching staff is planning practices “and trying to find creative ways to recruit, considering the current circumstances,” Dawson said.

With the pandemic ongoing, many questions remain about how the season will unfold. Still, Dawson said, the “one thing I can say is it’s been joyful to have the team back together. There’s a certain simplicity in it. I was a little skeptical before we were coming back, but actually seeing the value of being together and in this space, whatever happens, I think it’s been a very valuable step in the right direction.”

Virginia Falls 2-1 Against Maryland in the NCAA Sweet 16