Hausheer Making Most of UVA Experience

CHARLOTTESVILLE –– There are 24 hours in a day, and that’s barely enough for Lauren Hausheer, who’s in her fourth year at the University of Virginia.

In the McIntire School of Commerce, Hausheer has two concentrations (marketing and information technology) and two tracks (business analytics and strategic brand consulting), which are comparable to majors and minors, respectively. She’s also pursuing a psychology minor in the College of Arts and Sciences.

“I’m a very curious person,” said Hausheer, who’s from West Windsor, New Jersey, near Princeton. “I love learning, and it doesn’t really feel like as much of a job to me, as I actually enjoy studying.

Hausheer is also a talented field hockey player. She starts in goal for UVA and is a member of the U-21 women’s national team.

“She has great reflexes and instincts, and she reads the game well,” Virginia head coach Michele Madison said.

Hausheer is one of three UVA field hockey players in McIntire, a prestigious school to which students apply as second-years. (The others are third-years Taylor Henriksen and Jacquelyn Wilkins.) The curriculum is demanding and time-consuming, but Madison encourages her players to challenge themselves in the classroom, whatever their interests.

“That’s why they come to Virginia: for the academics and the hockey,” Madison said.

It’s common for Hausheer to stay up well past midnight studying, and that’s not ideal for a student-athlete, especially one who’s in-season. Madison admits to worrying occasionally that Hausheer is trying to do too much.

“She’s had her moments,” Madison said. “We’ve had those discussions often about planning, prioritizing and managing it all, so she doesn’t get overwhelmed.”

Juggling field hockey and academics, especially all the group work required in McIntire, isn’t easy, Hausheer said, “but it’s definitely doable. All my group members have always been amazing about being accommodating and understanding when we have practices or we’re traveling. And then I just try to do my work in my free time, when I have time on the front half of the week.”

When her group mates saw the itinerary for the Cavaliers’ recent trip to Chapel Hill, North Carolina, they couldn’t believe how little free time the players had on the road, Hausheer said. “They were like, ‘How do you guys do that?’ I was just like, ‘I don’t really know any other way of life, I guess.’ My schedule’s always been busy since I was a little kid running from practice to practice.”

Growing up, Hausheer was well aware of UVA. Her mother, Carol MacElree, graduated from McIntire in 1987 and holds her alma mater in high regard.

“And so when I was starting to look at colleges,” Hausheer recalled, “she said, ‘I at least want to take you to UVA. I’m not pushing it on you at all. I just want you to be able to see it and make your own decisions about it.’ And so we came here, and the moment I walked on Grounds I fell in love with the school. It was so beautiful, and the more I researched and looked into the school, the more I was very interested and loved it, because the hockey program is amazing, the academics are amazing, and there’s a fun social life, too.” 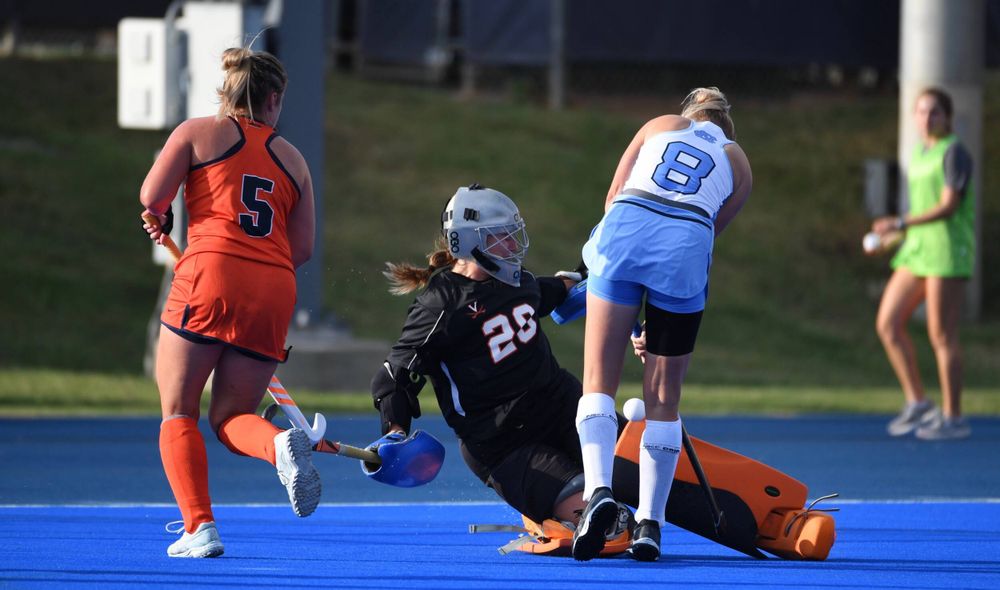 Hausheer committed to UVA at the start of her junior year at West Windsor-Plainsboro High School. About two years later, she enrolled at the University. She appeared in eight games for the Wahoos as a freshman 2017 and then redshirted in 2018.

In 2019, Hausheer started 22 of 23 games and helped the Hoos advance to the NCAA tournament’s final four for the first time in nine years.

Virginia is 3-3 overall and 2-1 in ACC play this season. Next up for the Cavaliers is a Friday afternoon date with Louisville at Turf Field. ACC teams are playing an abbreviated fall schedule because of the COVID-19 pandemic, which also has changed how Hausheer takes classes and how she interacts with friends.

The most challenging part for her, Hausheer said, has been “just staying away from people, because I’m a very social person, and I have friends in lots of different groups and areas. I have friends from my sorority, friends on the team, friends that I’ve been friends with since first year. I sort of have friends all over the place, and I’ve found it pretty hard not being able to see or interact with them. And you have to remind yourself that you have to stay away from people, distance-wise. You can’t run up and hug someone anymore, and that’s something that I love to do. So restraining myself with that has been hard.”

In field hockey, she’s found a measure of normalcy.

“In a world where everything’s uncertain and everything looks so different, at least the hockey is one thing that looks similar,” Hausheer said. “Obviously it looks different in the sense that we’re all wearing masks at practice and [socially] distanced, and we can’t really have all the luxuries we had, like pregame dances in the locker room, but the physical hockey part just brings you back to what life would be like without the whole pandemic, and it’s sort of something that you can ground yourself in that’s somewhat normal.”

She loves the sport, Hausheer said, “because it’s so fun. It’s so fun training at a high level, it’s so fun competing at a high level. I really enjoy all the people I’ve gotten to meet as a result of it and the relationships I’ve been able to build. I would say my goal with field hockey is to be the best player I can be, be the best teammate I can be, and be the best person I can be. And I think UVA’s really allowed me to flourish in all aspects of that.”

The pandemic has put her involvement with USA Field Hockey on hold, but she’s eager to resume training in the national-team system. She cherishes memories of her trip to Germany with the U-21 national team in April 2019. (Her UVA teammates Greer Gill and Rachel Robinson also played for the U.S. on that tour.)

In Mönchengladbach, the U.S. played the U-21 teams from Germany and Great Britain, respectively.

“I don’t even have words to describe how insane it was,” Hausheer said, “just putting on a jersey to represent the United States of America and play a game I love and compete at such a high level.” As if her schedule were not full enough, Hausheer decided last spring, after meeting with Carrie Heilman, an associate professor in the Commerce School, to launch a mentoring program for student-athletes in McIntire.

Her experience in 2018-19, her first year in the Comm School, inspired Hausheer. “I feel like I have so much advice, after going through that whole year and struggling through juggling everything, that I would love to help somebody else out in that similar situation.”

She said the “over-arching goals of the organization are to connect current and former McIntire student-athletes and build a support system to help maximize their experience and help them transition into and out of McIntire.”

Hausheer said she hopes the program will also “increase the number of student-athletes who apply to McIntire, because there are so many student-athletes who psych themselves out before ever applying: ‘Oh, the Comm School, I would never get in. I shouldn’t even apply.’ ”

“I can say with almost 100-percent confidence that every faculty member at McIntire who has a student-athlete or has worked with our student-athletes always speaks so highly of them, and on all dimensions,” Heilman said. “Certainly most of our faculty recognize the extra burden that they carry outside of the classroom and the time constraints, and even with that knowledge we’re just constantly amazed at how great they are.”

Working with Hausheer on the mentoring program has “been fantastic,” Heilman said. “She has driven the bus. This was her idea. I encouraged it, because I saw there was a need, and she’s taken the reins and run with it.

“I know she didn’t set out to do it [during a pandemic], but she now is facing these conditions where everything is being done at arm’s length via Zoom, and it hasn’t deterred her. That’s probably the greatest credit to her in all of this. It would have been very easy for her to fold under the pressure of everything else going on.”

Hausheer, who’s in a class Heilman teaches titled Strategic Brand Consulting and Communications, is one of 28 undergraduate student-athletes in McIntire. Others include Olivia Schildmeyer (women’s lacrosse) and Spencer Bozsik (men’s tennis), who also have taken on leadership roles in the mentoring program.

“They have been helping me with bouncing ideas around and helping me execute some of the things I have to do to get the organization up and running,” Hausheer said. “I am so grateful for them being so excited to work on this project with me, and I can’t wait to see the impact this is going to have on the athletics community as well as within McIntire.”

Hausheer said her fellow student-athletes in McIntire have been enthusiastic about the program.

“Starting it during COVID obviously isn’t ideal, because we haven’t been able to do any of the group aspects that I wanted to,” she said, “but once midterm season calms down a little bit, I’m planning on getting a little Zoom meeting together to at least try to introduce people and do something fun. And I’m really hoping that in the spring we’ll be in a place where we’re allowed to get together in a group.”

Hausheer, who had a virtual summer internship with the marketing department at Prince Michel Winery, is looking forward to another year at UVA, though she’s not sure what graduate program she would enter.

“I definitely want to come back for my fifth year, because this is not how I want my last year to be at UVA,” she said, “and I’m super excited that I have the opportunity, that it doesn’t have to be my last year.”

Whatever path Hausheer chooses to follow, don’t expect to catch her slacking off. That’s not her style.

“Every hour of the day is precious, and you might as well be productive during it,” she said. Three Cavaliers Named to the US U-21 National Team