“I am truly honored to receive the NCAA Silver Anniversary Award,” Vachris said. “The University of Virginia has always held a special place in my heart. I am so grateful that I had the opportunity to be a student-athlete where I had supportive coaches and wonderful teammates. At Virginia, I was inspired by those around me to work hard and to give back which is what I have tried to do in my professional career and in my community.” 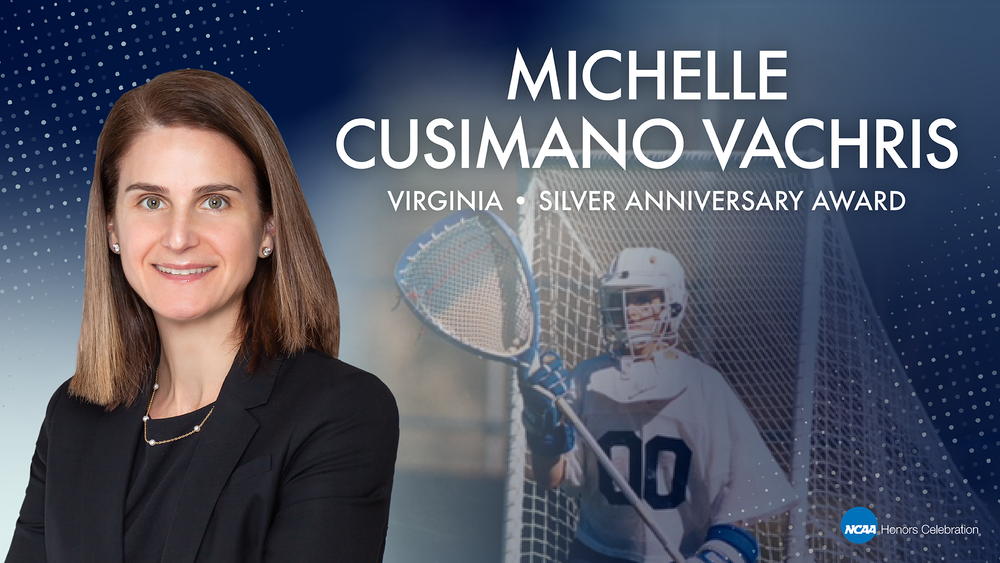 As a goalie during her four-year career at UVA (1993-96), Vachris was a contributing member of Virginia’s NCAA lacrosse championship team in 1993 and earned All-America lacrosse honors three times, including two first-team selections. She received national goalkeeper of the year honors in 1995 and 1996, and the Atlantic Coast Conference named her to its 50th Anniversary Team.

Vachris set UVA records for saves in a career (681) and saves in a season (225) and still ranks second in Virginia history for career save percentage (.641) and is sixth in career goals against average (6.30). She also set the mark for saves (26) in an NCAA final-round game. Vachris played internationally for the United States developmental lacrosse team.

The National Field Hockey Coaches Association named her an All-American in 1996. She ranks second in school history in career saves (474), fourth in single-season saves (199) and fourth in career goals against average (1.28).

Vachris currently serves as vice president and associate general counsel for labor and employment relations at ViacomCBS. She has been a member of the CBS law department’s diversity and summer internship committees. She has done pro bono work for several nonprofits and spoke on an ESPNW Campus Conversation panel, providing career advice to Virginia undergraduates.

The award annually recognizes distinguished individuals on the 25th anniversary of the conclusion of their college athletics careers. The honorees are selected by the NCAA Honors Committee, composed of representatives of NCAA member schools, conferences and distinguished citizens, including past awardees.

Silver Anniversary honorees will be recognized during a virtual Honors Celebration awards show on Wednesday, Jan. 13. The show will be streamed at 7 p.m. Eastern time on the NCAA Twitter account and on the ESPN app.