CHARLOTTESVILLE –– In his ninth game as a Cavalier, Kevin Ogudugu finally broke through.

It didn’t happen in the fall, when Ogudugu registered no goals or assists in eight games. On March 2, however, in UVA’s spring opener, he passed to Axel Gunnarsson for a goal in the eighth minute at Klöckner Stadium.

Three minutes later, Ogudugu scored himself off an assist from Andreas Ueland, and the Cavaliers went on to blank George Mason 3-0.

For Ogudugu, who’s from Oslo, the capital of Norway, the goal brought relief as well as joy.

“It felt like I almost forgot the feeling of scoring goals,” he said on a Zoom call this week. “It’s definitely motivating, and that’s what gets you going. Once you’re in a drought, you sort of lose that sense and you almost forget about how it really feels, and then you end up in a loop, which doesn’t really take you anywhere. But it can change so fast in soccer, and right now it’s changed for the better.”

What a strike to put the Hoos up 2-0 in the 58th minute! #GoHoos pic.twitter.com/cZp2dm6vmQ

“If you saw a couple games in the fall and you watched a couple games now, you can’t really tell it’s the same person out there,” said Ueland, a sophomore center back. “He didn’t really have those connections and bonds with people on the team in the fall. And now that he’s gotten to spend a semester, plus a little bit more, with the team, he gets the opportunity to get to know everybody a little more and gets a little more confidence and time on the ball to prove to everybody else on the team who he is and how he plays. I feel like we know that way more, and you can see his confidence when he’s playing now.”

Like Ogudugu, Ueland is from Norway, though his hometown, Bryne, is about a seven-hour drive from Oslo. Gunnarsson, a sophomore forward, is from another Scandanavian country, Sweden, and he’s given Ogudugu another resource in Charlottesville.

Their native languages are “very similar,” Ueland said. “Axel speaks Swedish, I speak Norwegian, and Kevin speaks Norwegian, but we all can understand each other perfectly fine.”

College soccer in the United States is an attractive option for many international players, and, when initially choosing a school, Ogudugu used the same Norwegian company Ueland had. Ogudugu ultimately picked Portland over Virginia and UCLA but admits now he wasn’t well-versed in the history of each program.

“Things have changed a lot since then,” he said. 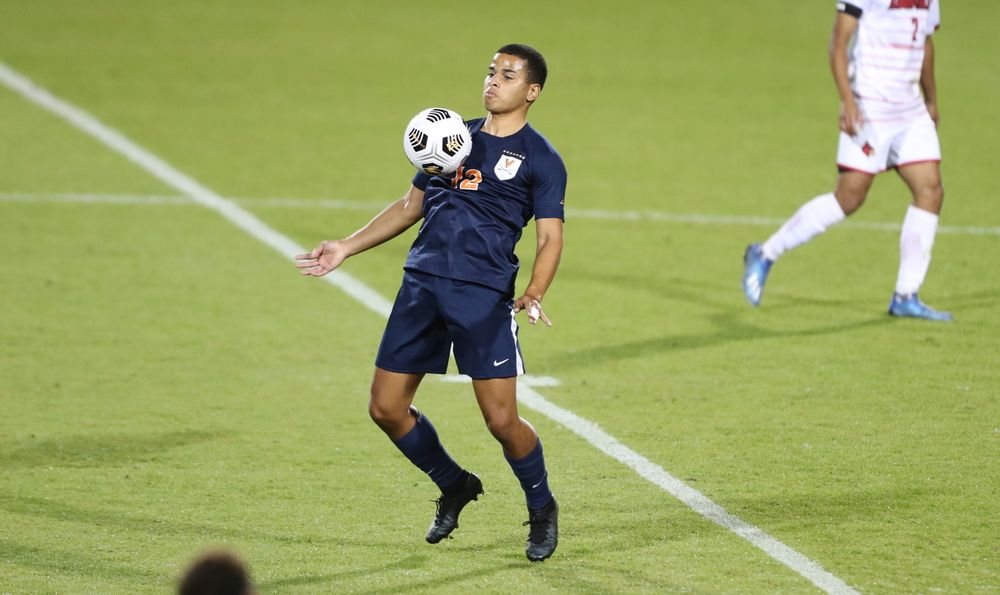 The Cavaliers have won seven NCAA titles, two of them under current head coach George Gelnovatch, and their tradition impressed him Ogudugu when he decided to leave Portland. So did UVA’s academic reputation.

“Realizing that, I think it was a no-brainer for me when I got the chance,” said Ogudugu, who hopes to major in global studies. “I’m happy I started out at Portland. It was a way smaller school and it was a great transition into the U.S. from Norway. I don’t regret that.”

He visited UVA early last year, not long before the COVID-19 pandemic shut down college sports and upended life in the United States.

“It was a couple of weeks before spring break and everything was normal, and that was a part of why I committed as well,” recalled Ogudugu, who spent much of his visit with Ueland and Gunnarsson, who answered his questions about the University and the soccer program.

His mother is from Norway and his father from Nigeria, and Ogudugu has dual citizenship. But he’s only been to Nigeria once. “Norway is my home,” Ogudugu said.

After flying to the United States last summer, Ogudugu had to quarantine after arriving in Charlottesville. By the time he was cleared, the Hoos had started preseason practice.

“It was just tough on him,” Gelnovatch said. “He’s kind of a quiet guy, too, and he’s still young. He’s only a second-year guy, so it’s not like we’re picking up a grad-school guy or an established guy.”

With the pandemic ongoing and strict protocols in place for UVA student-athletes, it was not an ideal situation for a newcomer trying to integrate himself in an established program. The Cavaliers’ locker room has been closed since the start of the 2020-21 school year.

“It was definitely a bit different,” Ogudugu said, “because in the soccer culture, you’re used to being in the locker room, interacting with each other, and that’s a major part of soccer. Before practice, after practice, you spend a lot of time with each other. But now we just show up on the field, maybe five, 10 minutes before practice, and then we go our separate ways after, which is definitely a change.”

Ueland said: “Once you come to a new team, you want to get to know everybody, spend as much time with them as possible, gain friends and all that kind of stuff. During the pandemic, that became a little difficult, so Kevin didn’t get to connect with the team the way he would have wanted to and develop those bonds. I can’t imagine what it’s been like for him. Now that we don’t have a locker room, we can’t really hang out that much.” 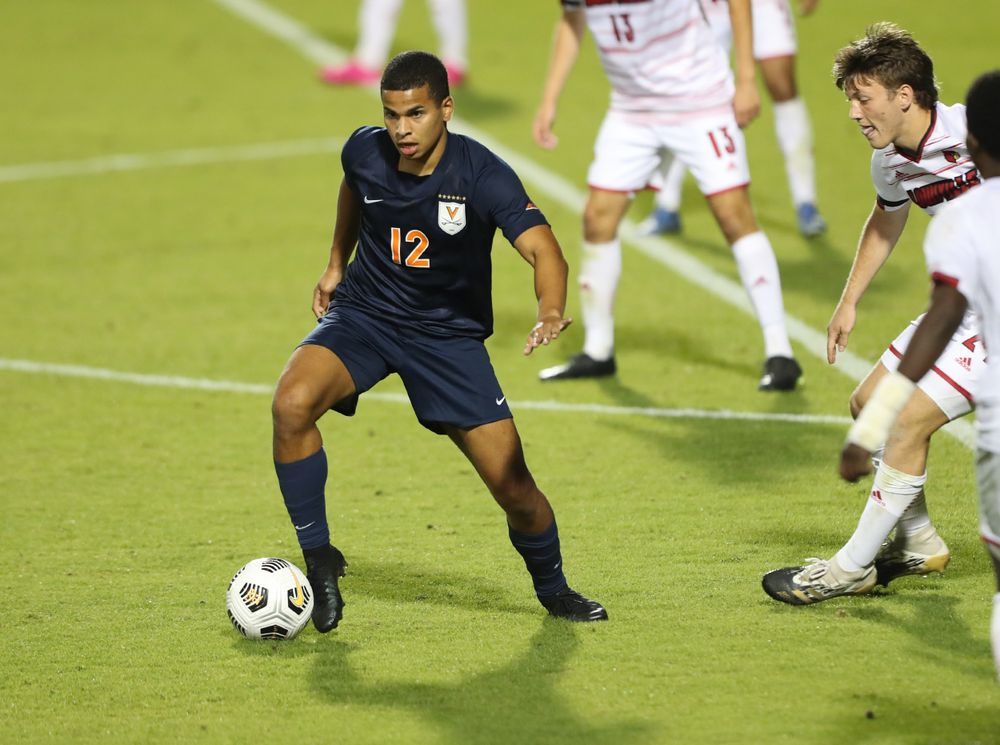 In 2019, led by Daryl Dike, Joe Bell, Henry Kessler and Robin Afamefuna, the Hoos advanced to the College Cup, where they lost a penalty kick shootout in the NCAA title game. All four of those players left to pursue professional careers, and UVA was a team in transition last year.

That wasn’t the only significant change. The NCAA tournament, usually held in the late fall, was pushed back to May, which meant ACC teams would play in the spring, too.

Ogudugu didn’t shine in the fall, and neither did the team as a whole. The pandemic added to the challenge facing the rebuilt Cavaliers, with schedule changes making it difficult for them to settle into a rhythm. Virginia, which is pursuing its 40th consecutive trip to the NCAA tournament, came into 2021 with a 3-4-1 record.

“Looking back at it, it’s hard to put a finger on one thing,” Ogudugu said. “We came [into matches] very prepared. But back then, we never knew if we were actually going to play. Every game was like: Are we gonna play? Is it going to be canceled? Is it going to be another intrasquad [scrimmage]? Are we going to end up having to travel for no reason again?

“It took a lot of focus out of actually just playing. Every COVID test was like, wow, maybe we have a positive. Now there’s a lot more certainty within the team, which really helps, I think. We know we’re going to play, and we’re preparing for the game properly, and your mindset is not about if we are going to play.”

Like the team in general, Ogudugu has “clearly made a pretty big jump this entire spring,” Gelnovatch said. “He’s more comfortable. We’ve also tried to make his role more specific, so that we can use his speed. We want him to stay wide, we want him to stay high, and when we’re in a transition moment or we catch a team [off-guard], we want to look for him behind the [defense].”

Most of the key players from UVA’s 2018 team returned the next season. Had Ogudugu joined the program in 2019, Gelnovatch said, his transition on the field would have been smoother.

“With everybody clicking and the locker room [open], I actually think he would have started for us and been really good outside,” Gelnovatch said. “He’s so fast and good off the dribble. He’s actually not a bad passer, too, when he’s crossing balls.”

All of which should bode well for Ogudugu’s career as a Cavalier.

“We’re going to be significantly better in the fall, with guys that are already here developing and a couple of the internationals we have coming in,” Gelnovatch said, “and I think as our team gets better, he’s going to be a dangerous guy.”