CHARLOTTESVILLE –– Head softball coach Joanna Hardin had been at the University of Virginia for about a month when one of her main recruiting targets, shortstop Katie Goldberg, arrived for a visit in the summer of 2016.

At that point, Hardin knew little more about UVA than did Goldberg, a rising sophomore at Marist School in the Atlanta area.

“I had not toured Grounds, I had no idea what any building was, I had only been to our [previous] field, The Park, once,” Hardin recalled.

“It was probably the worst tour I’ve ever given in my life, but I just told her about my vision for the program. I knew enough about the University and how incredible the education is, the academics, and how incredible the athletic department was and how successful it’s been. I really tried to communicate my vision for being as successful on the softball field as we are academically and how she could be the beginning of really changing the program.”

Goldberg had pared her college list to North Carolina, Georgia Tech and South Carolina, which was her favorite of the three finalists. UVA? Forget it. On a previous visit to Charlottesville, she had not connected with Hardin’s predecessor, and Goldberg had eliminated Virginia from consideration.

Then her father stepped in. At a tournament that summer, Craig Goldberg pointed out Hardin, but his daughter showed no interest. “I was like, ‘I do not want any part of that. I’ve already been there. I’ve been there, done that, and I don’t need to go again,’ ” Katie said, ‘and my dad was like, ‘Just look at it one more time. You didn’t even get a good visit. She’s a brand-new coach, and she’s really interested in you.’ ”

Goldberg reluctantly agreed to visit UVA again, and she and Hardin formed an instant bond during her stay.

“I had never gone to a school on a visit where the head coach had walked me around campus and talked me through everything,” Goldberg said. “Normally it was just the assistant coach, and then you end the visit with the head coach, and you’d be like, ‘How am I supposed to commit to a school if I don’t even know the head coach? That makes zero sense.’

“And so on that [visit to UVA] I was like, ‘All right, Coach Jo knows what she’s doing. She’s ready to get after it and compete.’ We clicked immediately, and I was like, ‘No questions asked, I’m going here,’ and I committed, I think, probably two weeks later.”

Of her first recruit at Virginia, Hardin said, “I’m so grateful that Katie decided to come here. She has been a huge part of the transition.” 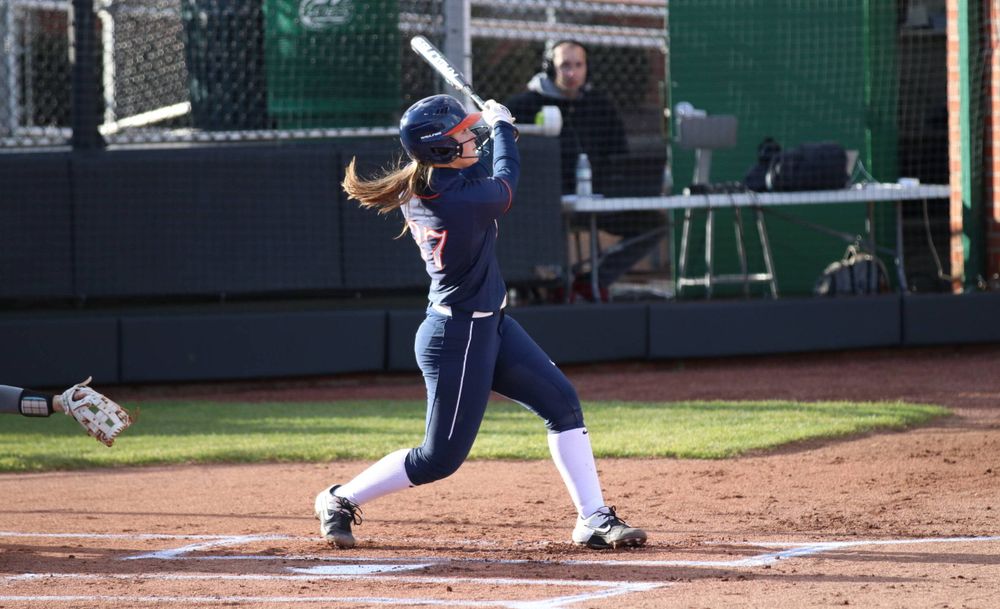 Goldberg, who’s 5-foot-8, is tied for the team lead with seven doubles. She sets the standard for the Hoos in other ways, too.

“Katie is no-nonsense,” Hardin said. “She’s competitive. She’s fiery. She’s passionate. She’s not satisfied with mediocrity. She wants to win. She is absolutely the player that is willing to speak the truth, whether you want to hear it or not.

“Coupled with that, she’s humble enough to take feedback. We’re pretty tough on Katie. We know she can handle that, but we also know she wants to get better. She wants to be the best shortstop, best hitter, best player she can be, and I think that really impacts everybody around here. It’s hard to be the no-nonsense, tell-it-like-it-is person, because I think it can rub some people the wrong way, but her teammates see her working and they see how much she invests and they see her success and they respect her. It’s very meaningful coming from someone who’s doing the work.”

B1 | We go live on ACC Network in time to see Katie Goldberg blast a three-run shot to center!

Goldberg, one of three current UVA student-athletes who graduated from Marist School, along with Jefferson Dockter (men’s tennis) and Brendan Farrell (football), first attracted attention for her prowess on the baseball diamond. As a 12-year-old, she was the only girl on an all-star team for which she routinely hit home runs. (She homered three times in one tournament game.)

Her exploits led to an appearance on national television. The Goldbergs were close with Steve Rayman, an automobile dealer in the Atlanta area who had appeared on UVA alumna Katie Couric’s show, “Katie.” Goldberg’s teammates in baseball included his son Jared Rayman, who’s now on the football team at UVA, and Steve Rayman contacted Couric and told her about Goldberg’s feats on the diamond.

One thing led to another, and Goldberg was invited to appear on the show. She balked at first.

Eventually, she gave in. Goldberg flew with her family to New York, where she was featured in a segment on “Katie,” and she enjoyed her time with Couric, a renowned host.

“She was awesome,” said Goldberg, who didn’t learn of Couric’s connections to UVA until she visited Charlottesville years later. 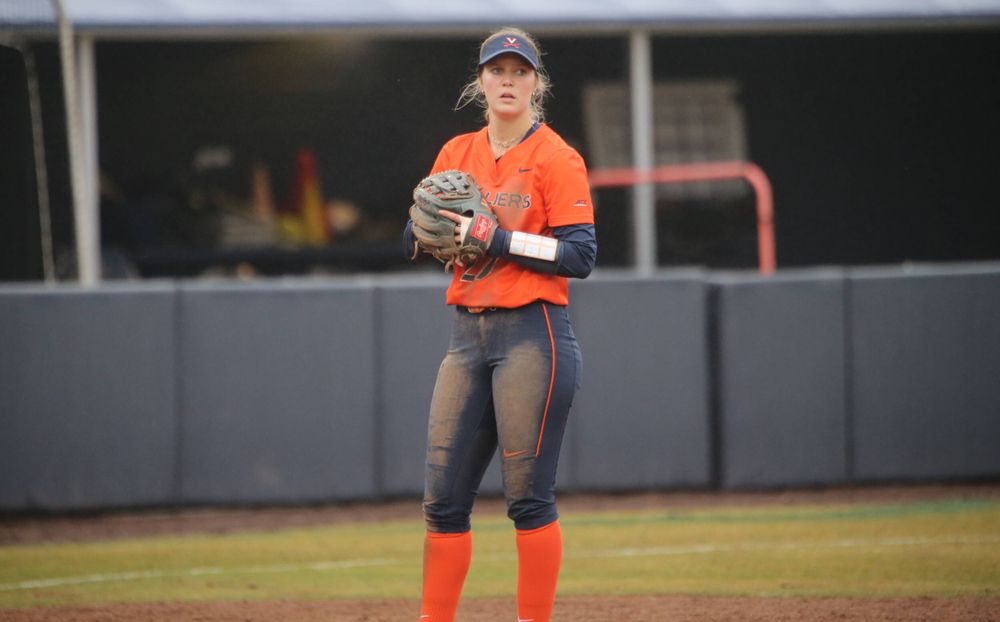 When she was 13, Goldberg began following a new athletic path, switching from baseball to softball. “Obviously, boys get bigger, faster, stronger, and I don’t think that would have gone very well for me,” Goldberg said. “I knew that I was in love with baseball, and softball was obviously the closest thing to it.”

Her transition to her new sport was anything but seamless.

“I’ll be honest, in my first year of softball, I was on a pretty competitive travel team, and I was terrible,” said Goldberg, whose brother, Will, plays catcher for Georgia State’s baseball team. “I was so bad. Fielding was fine. I kind of caught on to that quick, and it wasn’t that different. But the hitting, I was terrible, and it took me about a year to figure that out.

“Just the whole dynamic of [softball] was very different. I was used to talking to guys all the time, super easy, careless. Now I was on a team with all these girls, and I was like, ‘This is so weird.’ ”

Once she grew comfortable with softball, Goldberg established herself as a standout in the Georgia Impact travel program and for Marist. By the the summer of 2016, she had scholarship offers from multiple Power Five programs, many of which have strong traditions in softball.

UVA is different. In the four-decade history of the softball program, the Cavaliers have made only one appearance in the NCAA tournament, in 2010.

“I thought that coming to a school that wasn’t the best [in softball] would be super challenging and I would learn a lot,” Goldberg said. “Being able to say that I helped flip that program, and helped set the path for people coming behind me, was a huge goal of mine. Obviously, we’re in the process of that and we’re already doing better, which has been super cool to see.”

The Hoos were 10-12 overall and 0-6 in ACC play last season when the pandemic shut down college sports. Their pitching has been better this year, but the Cavaliers’ struggles at the plate have been the difference in many of their losses. Virginia, which has few seniors in key roles, is hitting only .235 as a team.

Goldberg, who’s hitting .298, said she believes the Hoos have the potential to be much better offensively, and Hardin agreed.

Goldberg said: “Coach Jo and I have conversations all the time just about trusting the process. We’re gonna get there. You can just see it. We’re getting so close, and we just need that final little breakthrough to kind of push us over the edge.”

This is the Hoos’ second season at Palmer Park, and Goldberg raves about the stadium, which is centrally located near Klöckner Stadium, Lannigan Field, Disharoon Park and John Paul Jones Arena.

“It’s been insanely nice being able to just show up and hit whenever I want,” Goldberg said. “I have an indoor [player development] facility right there, I have athletic trainers right there, a lounge, I have study rooms, I have plenty of meeting space where I can easily spend the entire day there and be comfortable.”

An economics major, Goldberg said she’s loving her college experience, even if the pandemic has disruped students’ customary routines. She’d rather be taking classes in person than online, “but you can’t really be mad when you’re at UVA, one of the prettiest campuses ever,” Goldberg said.

“I’ve been leaning on teammates and other friends a lot and just spending time wisely when I’m not at Palmer Park, finding fun things to do around Grounds or studying in different areas instead of just sitting in my apartment all the time. It hasn’t been too bad.”