CHARLOTTESVILLE –– More than once this month, other members of the University of Virginia men’s soccer team have kidded forward Leo Afonso, telling him to save some goals for the games that count.

The Cavaliers were scheduled to play three exhibition games at Klöckner Stadium ahead of their season opener. With severe thunderstorms predicted for Aug. 14 in Central Virginia, the first exhibition, against Navy, was canceled, but Virginia was able to squeeze in a intrasquad scrimmage before the bad weather arrived.

Afonso, a native of Brazil, scored two goals in that 45-minute game. He had another brace Aug. 17 in UVA’s first exhibition, a 2-1 win over Longwood. Four nights later, he scored two more goals in a 4-1 victory over Radford.

Leo Afonso comes up with the turnover and makes it 1-0 Hoos!

This feed by Ank Nibogora 🤯

This is Gelnovatch’s 26th season as head coach at his alma mater. He guided the Cavaliers to NCAA titles in 2009 and 2014, and his latest team is flush with newcomers, many of whom are expected to play key roles this fall.

“We haven’t had this depth since 2009,” Gelnovatch said. “That national championship team had depth. Now, we’ve certainly had some quality. That 2019 team is arguably one of the best 11 in the history of our program, but [it didn’t compare] depth-wise. That’s why we didn’t win a national championship.”

Virginia opens the season at 7 p.m. Thursday against Western Michigan at Klöckner Stadium. The match will be streamed live on ACCNX.

The Wahoos are coming off a trying season that started in the fall and ended in the spring, with the COVID-19 pandemic hanging over college sports throughout. Virginia finished 7-8-1 and missed the NCAA tournament for the first time since 1980.

“It was a horrible feeling,” Afonso said. “But knowing what that feeling is like, we’re all going to try this year to do our best to make sure it doesn’t happen again.”

Afonso, who in 2014 moved with his family from Brazil to Boca Raton, Fla., started six of the 15 games he played for the Hoos last season. But it was a challenging year for him, and not only because of the pandemic that affected most aspects of his college experience.

Before arriving in Charlottesville last summer, he’d be sidelined for about eight months with a groin injury for which Afonso ended up getting two injections of platelet-rich plasma.

Afonso missed preseason last year, Gelnovatch said, and “even when he was healthy, it took him time as a young guy coming into the program: time to get up to speed, time to get fit, all of that. He was a little bit behind the 8-ball coming in with the injury, but we liked him right away.

“It certainly would have been easier had he been scoring goals. It’s not easy coming in as a first-year to score goals, to get that confidence, to get that rhythm, to be that guy, but he was getting chances.”

Afonso finished the season with two goals but easily could have had several more.

“He had a one-on-one in the Syracuse game last fall [that he didn’t convert],” Gelnovatch said. “He was a young player. If it were today, he’d close his eyes and bury that.

“He had another kind of one-on-one in the first half of the Virginia Tech game in the spring that we won 2-0, and he took it really well and it just missed. Then he had a play against UNC at UNC, I still don’t know how it didn’t go in. I have no idea how it did not go in, he did everything really, really well, and there’s probably two or three others.” 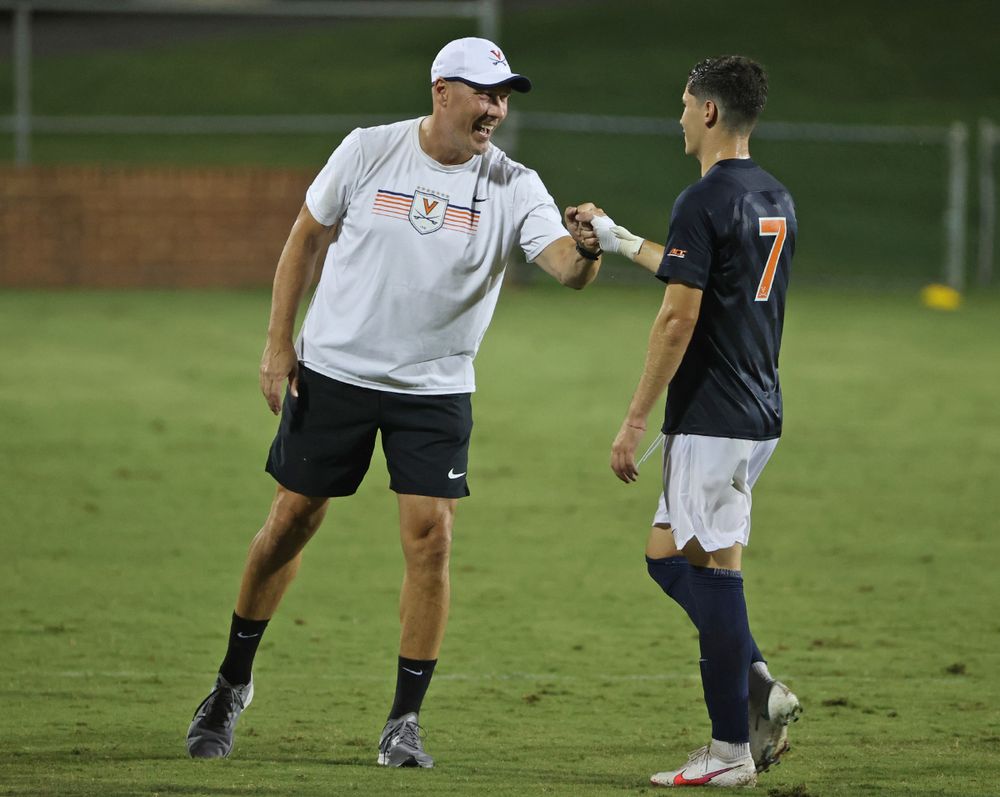 Afonso said his first year at UVA, in many ways, was “just about getting back on my feet. I was coming off an injury, and I was still rusty in the fall. Having the spring season last year was the best part for me, since I don’t think I was ready for the fall.”

Injuries ravaged the Cavaliers in the spring, however, and only a handful of the players who had major roles late in the season are currently among the team’s top 12 or 14, Gelnovatch said.

“Toward the end of the spring we were a shadow of ourselves,” Gelnovatch said. “So it was hard for Leo. But you could see how hard he worked and how passionate he was and how professionally he carried himself. He’s such a young pro in terms of taking care of himself, being on time, staying after [practice], working his tail off defensively. A couple of the goals he’s scored [this month] are from defensive plays, taking it off the opposition’s center backs and going and scoring.”

Afonso is one of the Hoos’ co-captains, along with junior defender Andreas Ueland.

As Daryl Dike did in 2019, when Virginia advanced to the NCAA championship game, Afonso plays the center forward position known as the 9. But Dike, now a burgeoning star in the professional ranks, stands 6-foot-2 and weighs about 220 pounds. Afonso is listed at 5-foot-11, 170.

“He’s different in stature than Daryl, and he plays the position differently,” Gelnovatch said. “He’s very fluid. Daryl is a classic 9. He stays forward and has a powerful presence. You kind of know where he is most of the time, because he’s high [up the field]. Where Leo moves around. So he’ll be high sometimes, he’ll come back into the midfield, he’ll drift out wide. It’s really hard to keep track of him.”

Afonso is what’s known as a “false 9,” a center forward who “roams around and shows up in [unexpected] places and gets you, and that’s what he does,” Gelnovatch said. “He can come back and handle the ball and pass the ball. He can come back wide and for a second be out there, and then you lose track of him, and all of the sudden he’s in the box and the ball’s coming to him and he’s doing his thing.” 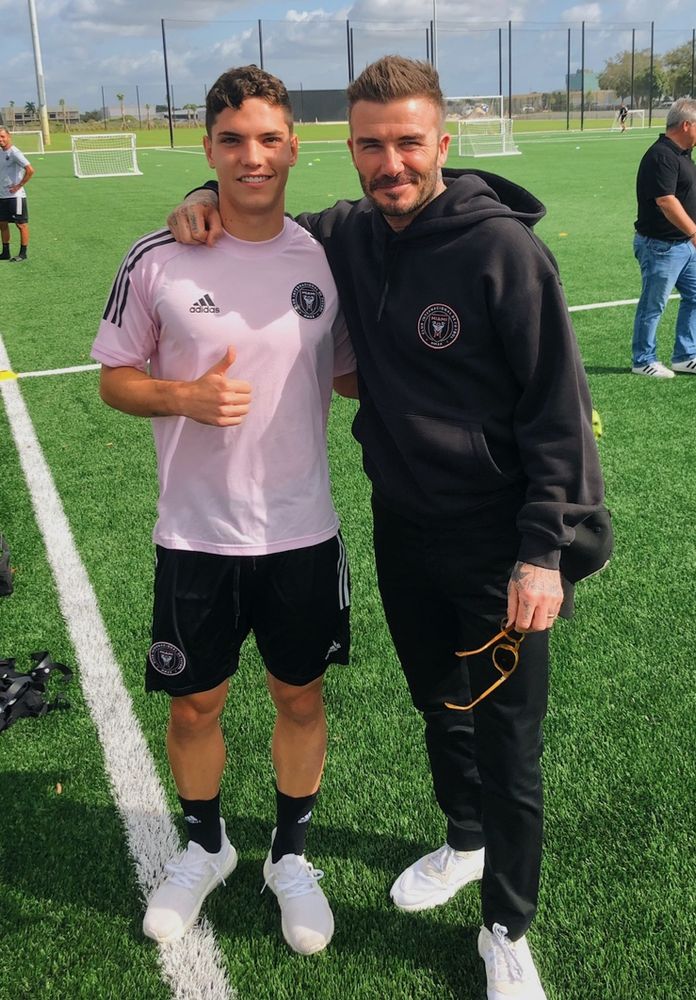 Growing up in San Paulo, Brazil, Afonso attended an English school. Even so, he initially struggled with the language and the culture after moving to the United States.

“It was definitely hard in the beginning,” he said, “but after I would say, like, three months, it just became easier and easier.”

For his freshman and sophomore years of high school, Afonso attended Somerset Academy and played club soccer for Boca United FC, for which he scored 25 goals in 2017-18.

That piqued the interest of several Major League Soccer academies, and Afonso chose to join the Philadelphia Union. He spent the 2018-19 school year in the Philly area, attending YSC Academy and playing for the Union’s youth program.

His father moved with him to Philadelphia, where they shared an apartment. “It was really fun,” Afonso said, “because we would train in the morning, go to school and then train again in the afternoon. So it was soccer, soccer, soccer, all day.”

For his senior year, he and his dad returned to South Florida, where Afonso joined MLS club Inter Miami’s new academy. Inter Miami’s owners include one of the sport’s legends, David Beckham, who’s also the club’s president of soccer operations.

“When I was at Philadelphia, I heard about Miami,” said Afonso, who attended Olympic Heights Community High School in 2019-20. “They were starting their academy, and I was like, ‘OK, that’s an opportunity for me to move back home and be close to my family.’ ”

He trained with Inter Miami this summer, mostly with its United Soccer League-affiliated team. Occasionally, though, Afonso would get called up to train with the club’s MLS players.

“I was playing with Gonzalo Higuain, Blaise Matuidi,,” Afonso said. “Those are guys that you play on PlayStation with, so just seeing them in person is amazing.”

He didn’t see Beckham in Miami this summer, but he’s met the former England international and posted a photo of them together on Instagram.

Afonso passed on an opportunity to sign a USL contract coming out of high school, and he says he’s happy he did. At UVA, Afonso roomed in 2020-21 with teammate Jules Anderson. They’re living this year with another Cavalier, Kaya Ignacio, and they’re optimistic about the new season.

In 2020-21, all of his classes were online, and he didn’t spend much time on Grounds. On Monday, with the fall semester starting the next day, Afonso had some research to do.

“I still have no idea where my classes are,” he said, laughing. “I still have to go figure that out before tomorrow.” 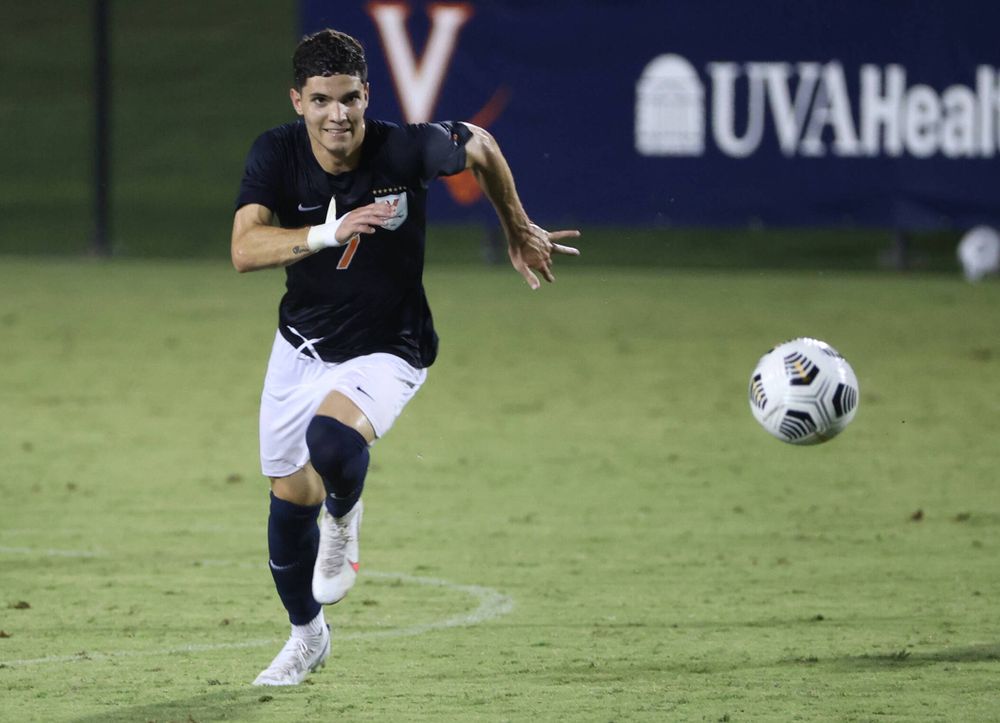